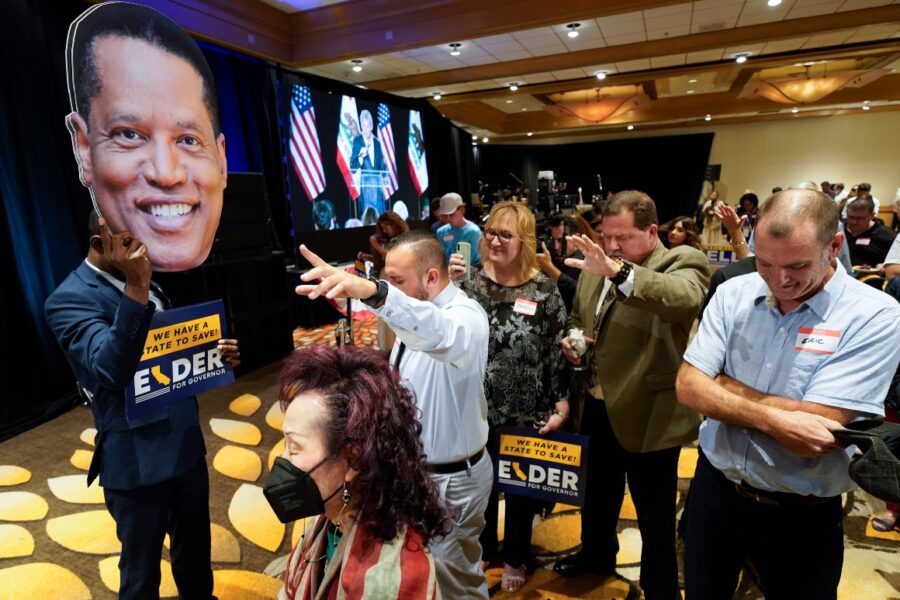 OAKLAND — California voters’ staggering rejection of the Gov. Gavin Newsom recall was bad enough for the state’s Republicans. Now the party has to navigate the meteoric rise of conservative Larry Elder, a defiant talk-show host who freely dispenses opinions far to the right of the broader electorate.

Seemingly overnight, Elder galvanized support from GOP voters in the state, building on his decadeslong experience of connecting with radio listeners to energize Republicans in a way no statewide candidate has in a generation. But his popularity is limited, constrained to one wing of a party that has withered to 24 percent of registered voters as the state has grown ever more liberal.

Newsom used Elder as his chief foil in the recall campaign, telling voters that the Republican would be a Trumpian governor, a message that resulted in a landslide win for the Democrat. Elder’s future plans remain uncertain, and the dilemma of who will lead the minority party, and how, comes as California Republicans gather by the hundreds this weekend in San Diego for their twice-yearly convention to make some of those calculations.

The party could embrace Elder, yet doing so may anchor California Republicans to a conservative vision that has resulted in more than a decade of losses in the blue state. Just as former President Donald Trump drove away moderates in California and other majority-Democrat states, so too could an empowered Elder.

“The best thing the California Republican Party can do if Larry Elder shows up is to discourage him from running again,” said GOP strategist Rob Stutzman, a Trump critic.

Elder’s strong showing compared to other challengers is diminished by another election result: nearly half of all voters chose no replacement for Newsom, leaving the second question on the ballot blank. But should Elder assume the role of chief party “influencer,” it may be hard to control him — or the party’s direction — in the next cycle.

Even Elder himself acknowledged last week that he may have reached his ceiling for voter popularity in California’s recall. As a percentage of all ballots cast in the recall election, he received only 27 percent support, well behind the share of voters who found no candidate worthy of support.

“When you look at the registration, Democrat versus Republican, when Gray Davis was recalled it wasn’t nearly as lopsided as it is now,” Elder told Inside California Politics after the election, referring to the Democrat ousted in 2003 and replaced by Arnold Schwarzenegger. “So it’s hard for me to see that were I to have a rematch, the outcome would be a whole lot different. But I may change my mind in the next coming days.”

Moderate Republicans see no future in embracing Elder’s views, which include opposing a minimum wage and restricting abortion rights. Schwarzenegger in 2007 told attendees of the state Republican convention that their party was “dying at the box office” by letting its conservative wing dominate. After last week’s result, he told the Los Angeles Times “it’s now direct-to-video.”

Still, the state GOP convention could deliver a forum to Elder, who pronounced within hours of the recall’s landslide defeat that he was “a force” in the party. And he’s been a busy presence on social media since the Sept. 14 election, signaling he doesn’t intend to leave the stage. Elder didn’t respond to requests for comment, and it’s unclear if he will attend this weekend’s convention.

In a statement, California Republican Party Chair Jessica Millan Patterson expressed confidence that the party would win congressional and legislative battleground races in 2022 but didn’t reference the governor’s race. She took solace from the GOP flipping four congressional seats in California last year and said the party expanded its infrastructure.

“The recall election is past, but the problems that still plague our state live on. Republicans are not giving up on California or backing down when it comes to taking the fight to the Democrats and forcing a debate on issues that will fix our broken state,” Patterson said.

Some conservative Republicans blame Elder for the party’s disastrous recall result, but they say it’s less a matter of his views and more a problem of the party having a strategy vacuum that allowed Elder to take over the race.

Orrin Heatlie, the retired Yolo County sheriff sergeant who spearheaded the grassroots movement to oust Newsom, plans on attending the events this weekend — where, he warns, the party should keep Elder at arm’s length. “We lost the middle ground when Larry Elder got into the race, and that’s why I opposed his candidacy,’’ Heatlie said in an interview.

But Heatlie also has an unapologetic criticism of the state party leaders, whom he says failed to fully back the will of 2.1 million grassroots voters, some of them Democrats and independents, who signed recall petitions in a call for change. GOP support, he said, was virtually “non-existent.”

He says voters’ biggest frustrations — including concerns about one-party rule by Democrats — have been ignored by an entrenched GOP. Long-simmering grievances over California’s tax rates, drought management and embattled state agencies like its Employment Development Department prompted him this week to launch a new political action committee called Rebuild California to focus on such issues, he said.

Kerns said the party also failed to tackle the Covid-19 issue head on by acknowledging voters’ fears as the state experienced another surge driven by the Delta variant. She said some polls suggest the decision by Elder and other major GOP gubernatorial candidates to support a rollback of mask and vaccine mandates may have alienated women and independent voters, who wanted answers — and alternatives.

“We can’t just be the party that says, `Do the opposite thing’ — because people are so scared,’’ Kerns said. “I think that’s where Elder lost people.”

GOP strategist Matt Shupe said there’s also a deep concern about the methods and messaging favored by the party’s insiders and campaign strategists, which fail to resonate with younger voters.

Those include Lanhee Chen, a policy analyst and Hoover Institution fellow who has already declared his intention to run for state controller as a GOP candidate. Chen, an appointee of the Obama administration and a son of Taiwanese immigrants, “should be a slam dunk for the party, in terms of a full embrace of his candidacy, and his being elevated,’’ said McCuan, a professor of political science at Sonoma State University. “He’s got ‘star’ written all over him.”

But in solidly blue California, where the GOP continues to cling to divisive figures like Trump and Elder, “he may not be able to run the gauntlet,” McCuan said.

Chen, who plans on being at this week’s gathering to meet and greet delegates, said that he’s not interested in divisive politics or drama.

“There’s going to be a lot of stuff playing out around me that I can’t control,” he said. “There’s not a lot I can control at the top of the ticket, so the best thing I know how to do is focus on my race, and my ideas — and we’ll see how it goes.”