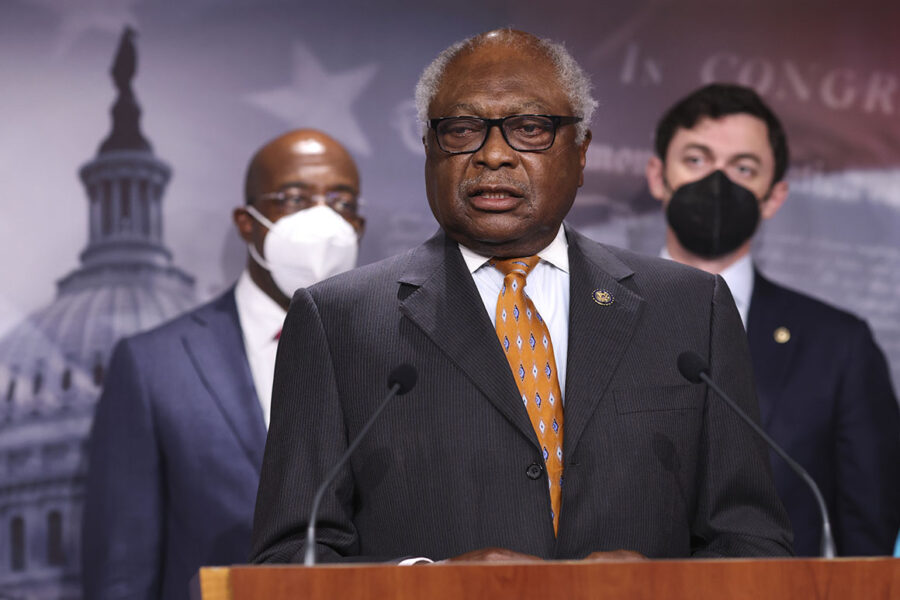 Top House Democrats are voicing a new willingness to pare down their ambitious health care proposals within the sweeping $3.5 trillion social spending bill as they scramble to build consensus ahead of a potential vote this week.

President Joe Biden’s call for $400 billion to boost long-term care services is expected to be sharply trimmed, lawmakers and advocates told POLITICO. And plans to expand Medicaid to more than 2 million people in states that have for a decade refused to do so may also have to be curtailed, said Jim Clyburn (D-S.C.), one of Congress’ most enthusiastic supporters of that effort.

Clyburn, the House majority whip, said for the first time on a conference call with progressive advocates on Friday that he’d be willing to back legislative language that only authorizes the new program for five years rather than the permanent fix the House originally put forward.

“I’m not one who will ever sacrifice what is good on the altar of perfection,” he said.

But Clyburn and others inside the fractious caucus say they’d still rather trim Medicare benefits — a top priority for Sen. Bernie Sanders (I-Vt.) and House progressives — than sacrifice Medicaid. They argue it would be better to limit new benefits like dental, vision and hearing coverage for older people already enrolled in Medicare rather than further delay relief for lower income, uninsured people in swing states.

“I think there are more ways to do reductions to the dental portion without destroying it than there are on the Medicaid portion,” Rep. Lloyd Doggett (D-Tex.), who chairs Ways and Means’ health subcommittee, told POLITICO. “I’m all for [dental, vision and hearing coverage], as long it doesn’t crush my Medicaid.”

The ongoing debate underscores the massive challenge party leadership faces as it heads into one of the most consequential weeks in Congress in recent memory. Speaker Nancy Pelosi announced plans for a vote this week on both the bipartisan infrastructure bill and the reconciliation package.

Those close to the process say any bill that makes it to the president’s desk will likely see cuts across the board to the party’s plans to expand Medicare, Medicaid, Obamacare and home-based care rather than a wholesale abandonment of any one thing. But some items are much more vulnerable than others — particularly provisions aimed at helping older, disabled and poorer Americans — and there’s a growing realization among Democrats that they will have to negotiate some top priorities.

Amid pressure from moderate Democrats in the House and Senate to shrink the overall package, Clyburn said he is open to other ways to trim the cost of the Medicaid provision, which would extend coverage to millions of people in states like his that refused to expand the health care program under the Affordable Care Act.

“I believe we have to take into consideration that you don’t get the whole loaf every time when you’re starting out,” he said, comparing the fight to the civil rights movement that built on its victories over time. “If we only get it for five years, that’s five years to keep working on it.”

But others worry that would doom the program because it will take at least three years to set up and Republicans could win the majority in Congress before it comes up for renewal.

Knives are out for the Medicaid expansion piece for political reasons as well as cost. Democrats leading the fight for the program on Capitol Hill say they’ve already gotten pushback from colleagues who wonder why they should help states where Republicans have blocked expansion for years.

”That’s the wrong argument,” said Sen. Raphael Warnock (D-Ga.), the leading advocate in the Senate. Warnock campaigned on expanding Medicaid and hopes to run next year on securing its passage in what is expected to be a tough reelection contest, which could determine control of the Senate.

“This is what the American people voted for when they gave us the majority,” he said. “Whatever we do, we must expand Medicaid.”

Clyburn said an unnamed senator from one of the 37 states that did expand Medicaid recently asked him: “Why should we give South Carolina a pass?”

“We have to view this as a national problem and not allow health care to be meted out by what state you live in,” he responded.

A health care industry source close to the Capitol Hill negotiations said in addition to the fears that expansion states would resent Democrats for providing free coverage to people in the holdout states, they also worry Republican state leaders will try to spin it to their benefit.

Lawmakers and advocates told POLITICO that the Biden administration’s call for a $400 billion investment in home care is also in the crosshairs as negotiators look for places to cut the cost of the overall bill.

Language that passed out of committee in the House cut the figure to $190 billion, and some in the Senate have pushed for as low as $150 billion. Now, lawmakers and advocates backing the program, are arguing to leadership that a minimum of $200 billion to $250 billion is needed to make in-home services available to the more than 800,000 people on waitlists for care, helping those people stay out of short-staffed nursing homes and long-term care facilities in the middle of a pandemic.

“That is the goal — to try to clear the wait list,” Sen. Tammy Duckworth (D-Ill.), one of the senators leading talks on the home care piece, confirmed to POLITICO. “That is what we’re using as the basis for the numbers we’re demanding.”

The influential union SEIU — which represents thousands of home care workers around the country — has mobilized to defend the provision from further cuts, holding meetings with every single member of Congress, running digital and TV ads targeting Sen. Kyrsten Sinema (D. Ariz.) and other moderate Democrats who’ve called for cuts, and holding rallies on Capitol Hill.

“We heard that Senate Finance is at $200 billion [in funding], but we’re going to keep pushing,” SEIU President Mary Kay Henry told POLITICO. “If the number gets too low, services will expand but the workers’ wages won’t go up. That should make the moderates pause.”

Megan Wilson contributed to this report.