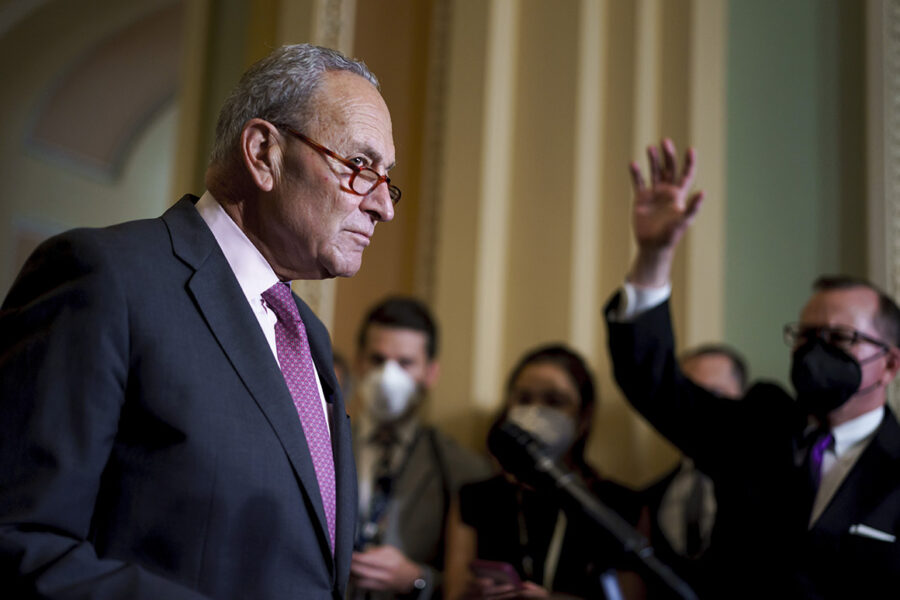 Democratic leaders keep ruling out what may be the only way to avoid a debt default, leaving lawmakers and financial markets uncertain of how a dramatic clash with Republicans over raising the debt ceiling will play out.

Senate Majority Leader Chuck Schumer seemed to shut the door on using budget reconciliation to raise the debt ceiling. Instead, he is leaning on Republicans to stop blocking a debt limit increase as the country creeps closer and closer to cataclysmic debt limit breach in three weeks.

Schumer concluded on Tuesday afternoon that “going through reconciliation is risky to the country and is a non-starter.” Speaker Nancy Pelosi said Schumer’s position is “shared by many members” but declined to say if she supports the idea or aligns herself directly with Schumer: “We’ll see what our options are.”

There’s mass confusion among congressional Democrats about how the majority party and its slim majorities will avoid a potential default just three weeks away. Senate Republicans on Monday sank Democrats’ plan to fund the government into December and kick the debt limit through the 2022 midterms, then they blocked an effort from Schumer to lift the debt ceiling by a majority vote on Tuesday.

Consternation over the debt limit is reaching the highest levels of Democratic leadership as uncertainty hangs over Congress. President Joe Biden discussed the possibility of raising the debt ceiling via budget reconciliation on Monday evening on a telephone call with Pelosi and Schumer, the latest sign that Democrats are searching for a way around entrenched GOP opposition.

No final decision was made on the call, according to two Democrats familiar with the conversation. But the GOP’s stubborn opposition to raising the debt ceiling has Democrats fuming as they search for a way to avoid a shutdown on Friday and a default in October.

“We may have to use reconciliation. I think that would be a sad statement of Republican responsibility,” conceded House Majority Leader Steny Hoyer. He later walked that back and said it was “not the option we’re pursuing.” Privately, however, Democrats say congressional leaders are not ruling it out as it may be the only way around the Senate GOP.

Reconciliation allows Democrats to avoid a GOP filibuster, but requires close coordination between the House and Senate and could take weeks. Schumer has been walking his caucus through how cumbersome it could be to use the arcane budget process to raise the debt ceiling and the many pitfalls ahead if leaders choose to follow that route.

Democrats are likely to pass a government funding bill without the debt ceiling attached to head off a shutdown this week. But that doesn’t mean they are committed to using reconciliation to lift the debt ceiling. Instead, Schumer has warned his caucus that the gambit would be “burdensome and untenable,” according to one of the Democrats.

“Using reconciliation is a non-starter. We have gone through it twice, I’ve listened, and it takes him about 15 minutes for Chuck Schumer to explain how that works, what it involves. Three or four weeks of activity in the House and Senate,” said Senate Majority Whip Dick Durbin (D-Ill.).

There’s little time to waste. Treasury Secretary Janet Yellen warned Congress on Tuesday that lawmakers must raise the debt ceiling by around Oct. 18 to avoid a debt default. That means Democrats would need to start moving on the time-consuming reconciliation process in the coming days to avoid a default, should they choose that path over continuing confrontation with Republicans.

On Tuesday, Schumer asked Senate Republicans to allow a standalone vote on the debt limit at a majority threshold rather than the typically needed 60 votes, though Senate Minority Leader Mitch McConnell rejected that ask. Though he has pushed Democrats to raise the debt limit on their own, McConnell prefers they use budget reconciliation, a more excruciating maneuver.

“Leader Schumer wants Democrats to be able to do it alone if Republicans refuse to help. So that’s really what is being pursued at this point in time,” said White House press secretary Jen Psaki. She pleaded for McConnell to “get out of the way and let Democrats do it alone.”

Sen. Ted Cruz (R-Texas) made clear that Republicans are intent on making it as difficult as possible for Democrats to raise the debt ceiling — even as they insist Democrats do it all on their own .

“When this fails I fully expect Schumer will surrender and do what he could have done weeks or months ago, which is raise the debt ceiling with Democratic votes,” Cruz said.

When asked why not just allow Schumer to do exactly that on Tuesday rather than force Democrats to pursue reconciliation, he responded: “He wants consent because all 50 Republicans would have to consent. It’s the same game and he knows the outcome.”

Senate Democrats also might need to cancel a mid-October recess to raise the debt ceiling on their own via reconciliation, which allows the party to avoid a GOP filibuster but would require negotiations with the parliamentarian — the Senate’s rules arbiter — and some degree of cooperation from Republicans. McConnell confidently predicted that Democrats will raise the debt ceiling “because we always do,” though typically both parties support an increase.

“I know the country is not going to default. I know they have the votes to do this,” McConnell said in an interview. “I don’t have any doubt that they will take care of this.”

But Schumer has more plans in mind for filleting Republicans as the party of “default” and may force them to vote a second time on the House-passed funding and debt proposal they blocked on Monday.

House leaders are also considering passing a spending bill that leaves out the debt limit and sending the Senate standalone legislation on that issue in the coming days. That bill is expected to lift the debt ceiling through the November midterms next year, according to two Democrats familiar with the plan.

Pelosi told Democrats that “there might be a timely vote” on the debt limit as soon as this week and asked if there’s anyone in her caucus “who will not vote to preserve the full faith and credit in the United States,” according to Democrats in the private meeting.

Democratic aides with knowledge of the plan say the House will likely vote on the clean debt limit bill on Wednesday, along with a separate vote on a continuing resolution to fund the government this week that does not include raising the debt ceiling. Government funding runs out on Oct. 1.

Marianne LeVine and Myah Ward contributed to this report.