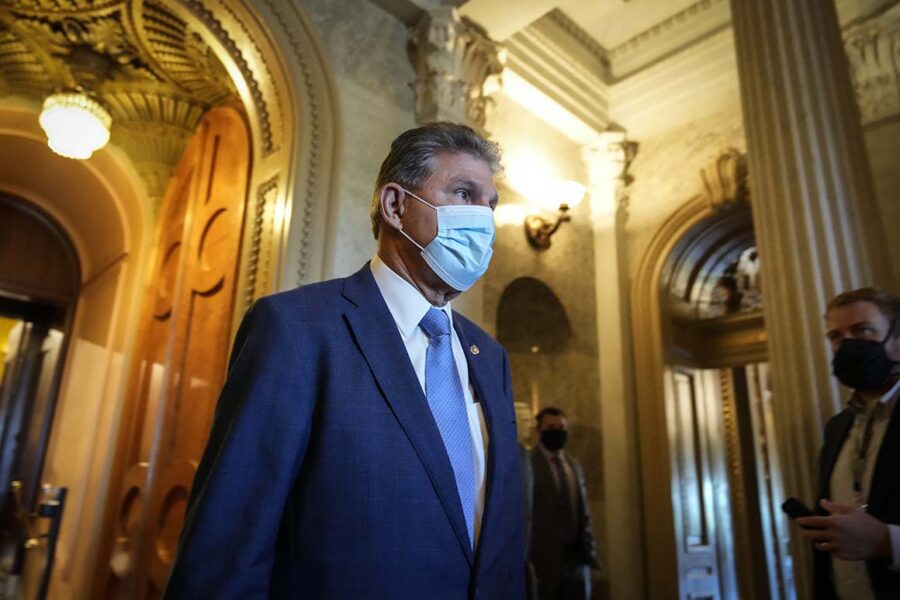 Joe Manchin proposed a deal to Senate Majority Leader Chuck Schumer this summer to limit the total cost of Democrats’ sweeping spending bill to $1.5 trillion, according to a copy of the agreement obtained by POLITICO.

The West Virginia senator has been distributing the document to Democratic colleagues and leaders in recent days to underscore that he has outlined his red lines on President Joe Biden’s jobs and families plan. The one-page understanding is dated July 28, right before the Senate passed a bipartisan infrastructure bill that Manchin helped write and ahead of Senate passage of a budget setting up a spending bill as large as $3.5 trillion.

In the document, Manchin proposes raising the corporate tax rate to 25 percent, the top tax rate on income to 39.6 percent, raising the capital gains tax rate to 28 percent and says that any revenue from the bill “exceeding” $1.5 trillion will go to deficit reduction.

Manchin has repeatedly raised the deficit as one of his major concerns, and in this document he asks for the Federal Reserve to taper its quantitative easing program in the interest of relieving inflation concerns and asks that no funds in this bill be spent until previous Covid aid money is disbursed.

“Senator Manchin does not guarantee that he will vote for the final reconciliation legislation if it exceeds the conditions outlined in this agreement,” the paper reads in bold text.

Both Manchin and Schumer signed the document. Schumer wrote a note saying that he “will try to dissuade Joe on many of these.”

It’s unlikely Democrats will agree to Manchin’s demands, and it’s not clear how flexible Manchin will ultimately be. But the document shows that Manchin has provided Schumer with more information than many rank-and-file Democrats.

He’s also met with Biden several times since signing the document and has been talking to the White House frequently this week. The White House and other Democrats have largely dismissed Manchin’s proposal thus far. But they also need to cater to him in a 50-50 Senate where Democrats can’t lose a single vote to pass a bill via budget reconciliation, which allows passage of economic legislation by a simple majority.

In a chaotic press conference on Capitol Hill after this story published, Manchin said the document cleared the way for August’s action on his bipartisan infrastructure bill and the Senate budget. As activists harangued Manchin, he explained that in July he wasn’t even sure there was a need for a reconciliation bill but believed he’d compromised by coming up to $1.5 trillion.

“I wasn’t trying to be a fly in the ointment at all. I’ve never been. I’ve never been a liberal in any way shape or form,” Manchin said. “For them to get theirs, I guess elect more liberals. I’m not asking them to change. I’m willing to come from zero to $1.5” trillion.

Separately, Biden and the White House have been engaging in breakneck negotiations with Sen. Kyrsten Sinema (D-Ariz.), the other prominent holdout in the Senate. She’s generally aligned with Manchin on the spending number, but has expressed more concerns with Democrats’ tax plans than Manchin has.

“Senator Sinema said publicly more than two months ago, before Senate passage of the bipartisan infrastructure bill, that she would not support a bill costing $3.5 trillion. In August, she shared detailed concerns and priorities, including dollar figures, directly with Senate Majority Leader Schumer and the White House. Claims that the Senator has not detailed her views to President Biden and Senator Schumer are false,” said John LaBombard, a spokesman for Sinema. “She continues to engage directly in good-faith discussions with both President Biden and Senator Schumer to find common ground.”

Manchin said on Wednesday the top priority of the Senate’s reconciliation bill should be tax reform, and he’s generally on the same page with most Democrats in his proposal — though his corporate tax rate idea is below Biden’s preference and that of House Democrats. Manchin is not alone there: Sen. Angus King (I-Maine) said in an interview this week he also prefers a 25 percent corporate rate.

Additionally, Manchin is calling for means testing on as many new programs as possible, including health care, child care and education, “targeted spending caps on existing programs” and “no additional handouts or transfer programs.” Manchin has repeatedly raised concerns about Biden’s plan potentially creating an “entitlement society.”

Finally, as chair of the Senate Energy Committee, the coal state Democrat asks that his panel have sole jurisdiction over any clean energy standard and requests “innovation not elimination” of energy sources. He’s also demanding support for technologies that capture emissions from power plants and store them underground, known as carbon capture and sequestration.

Further, he wants assurances that fossil fuel subsidies won’t be repealed if tax credits for wind and solar power are included in the bill and asks that if tax credits are extended to electric vehicles, they also include hydrogen-powered vehicles.

Anthony Adragna contributed to this report.