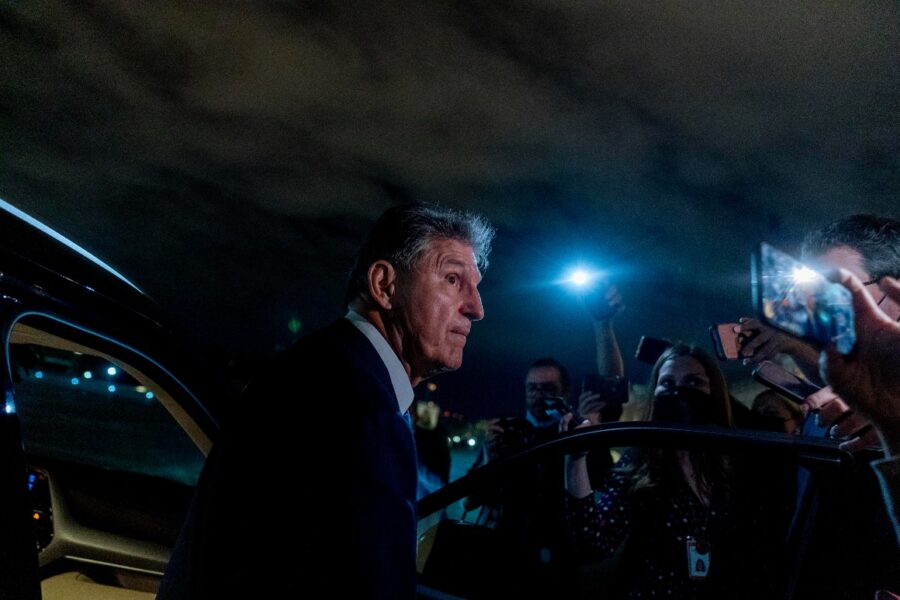 Senate Republicans are finally coming to the table on elections reform. Sort of.

As Sen. Joe Manchin (D-W.Va.) pursues a longshot bipartisan agreement, some Senate Republicans are engaging in preliminary discussions with him on the issue. Even though Senate Republicans have ruled out legislation Manchin and a group of Senate Democrats introduced last month, which amounted to an intraparty compromise on elections and ethics reform, that’s not stopping the West Virginia Democrat from frantically looking for GOP partners while a much-anticipated vote on the legislation remains on pause.

“I’ve been talking to him about some things that I could be for,” said Sen. Roy Blunt (Mo.), the top Republican on the Rules Committee. He listed a few areas he could back, including: “some ballot security ideas, an election advisory commission, [developing] standards that states would need to comply with to get federal funding in the future.”

Yet, the odds of Manchin’s engagement resulting in an agreement are slim, given the significant ideological gulf between the two parties on the issue.

Senate Majority Leader Chuck Schumer has vowed that the Senate will soon vote on the latest Democratic proposal, which would establish some federally mandated voting rules, including early voting options and expanding access to mail ballots. In addition, the legislation requires a much larger swath of politically active groups to disclose their donors and adds more transparency requirements.

Schumer has said that he is giving Manchin time to reach out to Senate Republicans before putting the legislation on the floor. But so far it has no support from the 50 members of the GOP caucus, who say it’s an effort to federalize the U.S. election system and interfere with state rights.

“We’re negotiating with Republicans in good faith and we’ll see what happens,” Manchin said this week. “We have some recommendations from our Republican friends that are going back now. So we’ll see how that goes.”

In addition to Blunt, Sen. Lisa Murkowski (R-Alaska) is among the Republicans speaking with Manchin on the issue. Others were reluctant to discuss their involvement.

Many proponents of Democrats’ election and ethics reform package argue that efforts at a bipartisan compromise are futile. Progressives have long wanted the legislation to serve as the vehicle for killing the legislative filibuster and Democrats argue passing the bill in the near future is necessary to combat restrictive GOP state voting laws.

But with no change in Senate rules, the latest Democratic plan has no chance of passage. Some Democrats had privately hoped that Manchin could be swayed to change the chamber’s rules if he tried and failed to get Republicans on board. Manchin, along with Sen. Kyrsten Sinema (D-Ariz.), is adamantly against both nixing the legislative filibuster and creating a carveout just for voting legislation.

Manchin is not the only Democrat to reach out to Republicans on legislation related to voting and elections, despite months of stalemate. Sen. Patrick Leahy (D-Vt.), a member of the Judiciary Committee, has also contacted Republicans about legislation named after the late Rep. John Lewis (D-Ga.) that would restore a requirement that certain jurisdictions receive federal approval before making changes to voting laws. While the bill passed the House in August, Murkowski was the only Senate Republican to co-sponsor the legislation last year and said this week that she’s still participating in discussions.

“I am continuing to work with my friend Joe Manchin and with Sen. Leahy,” she said.

Sen. Thom Tillis (R-N.C.), meanwhile, has also spoken with both Manchin and Leahy about voting legislation. But Tillis acknowledged that at the moment “there’s a pretty wide gap.”

“I always look for opportunities to work with [Manchin],” Tillis said. “We’ve had our staff to talk with Leahy and others but I think in the same way that they have red lines they have to see, we have some red lines on things we can’t allow.”

Manchin has strong relationships across the aisle and Senate Republicans have gone out of their way to praise the West Virginia Democrat for his refusal to scrap the legislative filibuster and his opposition to the $3.5 trillion price tag on Democrats’ social spending plan. Senate Minority Leader Mitch McConnell has offered warm words for Manchin recently and even met with him about the latest elections and ethics bill, despite saying hours earlier that it would receive no Republican support.

While Manchin played a key role in reaching a deal on the bipartisan physical infrastructure package and a coronavirus relief bill last year, bridging the party’s gaps on voting is a heavier — and potentially impossible — lift. At the moment, it’s hard to see an agreement that would both get 10 Republicans on board and satisfy the 50 member Democratic caucus, many of whom view the elections and ethics bill as an existential issue.

“Joe’s just thinking: is there anything we can agree on,” said one Senate Republican. “The problem with most of what he wants to do substantively has to do with taking over the state role, and we can’t go there because we don’t believe in it.”

Manchin has long insisted that any change to voting laws be bipartisan, and in June published an op-ed explaining his opposition to the Democrats’ initial ethics and elections reform, given the designation “S.1.” to signify its importance to the party. Over the summer, Manchin worked with a group of seven Democratic senators and Schumer to come up with legislation that had support from all 50 Democrats.

Manchin’s Democratic colleagues are watching his effort to woo Republicans with a mix of skepticism and interest. With the fight over the debt ceiling and a push to get Manchin’s vote on the reconciliation package, the public debate over how to move election and ethics reform through the Senate is not front and center.

Sen. Mazie Hirono (D-Hawaii) said “there’s always hope” that Manchin can strike a compromise, citing her own bipartisan legislation to address hate crimes against Asian Americans, but added: “I’m not betting on it.” Meanwhile, Sen. Chris Murphy (D-Conn.) compared Manchin’s efforts to get Republicans on board to his own push for some type of background check expansion.