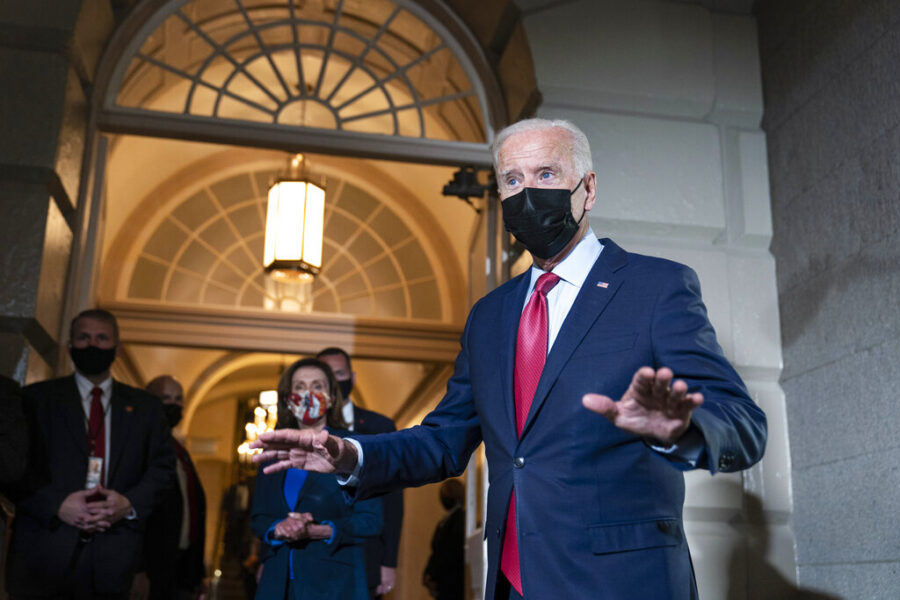 President Joe Biden deflated the air of urgency around a bipartisan infrastructure vote and tamped down liberal dreams of a $3.5 trillion spending bill in a speech before House Democrats Friday. Hours later, Democratic leaders conceded defeat — at least for now.

After weeks of trying and failing to find a legislative solution both the progressive and centrist wings of the caucus could support, Speaker Nancy Pelosi and her team passed a bill temporarily funding expiring transportation programs and sent frustrated members home until they can find a solution.

“It’s not a success,” House Majority Leader Steny Hoyer said in a brief interview Friday night. “We need to pass both these bills, that’s going to be our objective.”

In a letter late Friday, Pelosi said “more time is needed” to reach an agreement on a legislative framework for Democrats’ social spending plan before the House will be able to vote on the Senate-passed infrastructure bill, delaying a vote on the bipartisan measure for a third time and infuriating moderates.

The anticlimactic end to a week of high stakes negotiations left moderates furious, blaming their fellow Democrats for derailing what they saw as a simple — and critical — party win.

And while centrists were raging, it was a tactical win for Congressional Progressive Caucus Chair Pramila Jayapal (D-Wash.), who went toe-to-toe with leaders of her own party and solidified liberals’ muscle in the caucus — defying the expectations of some in their own party.

“People just had tremendous buy-in to the strategy, to the content, and were down to fight for everybody and leave nobody behind,” Jayapal said leaving the Capitol Friday night.

But beneath the normal narrative of intraparty feuding, Democrats worried whether the week’s failure to deliver either a deal on their social spending bill or an infrastructure vote would have lasting consequences. Some left the Capitol after a frenzied day of meetings — including 40 minutes with Biden himself — wondering whether their party was on track to achieve neither of his major domestic priorities.

Biden’s visit to the Capitol caps a dizzying three months in which Pelosi cut seemingly competing deals with the two disparate factions of her caucus amid escalating threats. Those promises collided this week, with little certainty of whether Biden, Pelosi and Senate Majority Leader Chuck Schumer can regain enough momentum to achieve either plank of the president’s domestic agenda.

While several Democrats hoped Biden’s rare appearance Friday — his first in-person huddle with House Democrats as president — would rally support for the $550 billion infrastructure bill, he actually did the opposite.

The infrastructure bill “ain’t going to happen until we reach an agreement on the next piece of legislation,” Biden declared in the private caucus meeting.

The announcement stunned Democrats, from moderates who have been promised a vote on the infrastructure bill from the leadership for weeks, to rank-and-file members who just wanted to know the next steps.

“I thought the president might have asked for support. But. he called for unity and said, let’s work through this together,” said Rep. John Larson (D-Conn.).

“It was a shocking failure to meet the moment,” added one Democratic moderate, who emerged disappointed that Biden hadn’t delivered a call to action for the caucus.

Some Democrats argued that Biden had made progress toward unifying the party behind his social safety net bill that would reform policies on child care, health care and climate change by significantly lowering expectations for what was initially going to cost as much as $3.5 trillion.

Biden sought to lower those expectations in the meeting Friday, where he discussed a price tag for the legislation between $1.9 trillion and $2.3 trillion, implying that it could win the backing from Senate moderates. Progressives, who had previously balked at the idea of a lower price tag, rallied around it afterward.

But several centrist Democrats worried that Sen. Kyrsten Sinema (D-Ariz.) — who along with Sen. Joe Manchin (D-W.Va.) is key to any deal on the social spending plan — would pull out of the talks after the House once again punted on the infrastructure bill. Moderate Democrats also worried that the setback would cost them the votes of a dozen or so House Republicans who planned to back the Senate infrastructure bill.

“I feel great,” said Rep. Chuy García (D-Ill.), one of dozens of progressives who had threatened he wouldn’t back the president’s infrastructure bill without promises on the broader spending plan.

“I feel like we have an affirmation about the direction we’re moving in,” added Rep. Veronica Escobar (D-Texas.).

What’s unclear now is what happens next. Pelosi has vowed to continue working with Schumer and the White House to strike a deal with Manchin and Sinema.

Democratic leaders are hoping to get the two powerful Senate centrists to agree to a spending bill target around $2.1 trillion as well as consensus on major policy issues including child care and paid family leave, health care and climate change.

While those negotiations continue, the House could be out for up to two weeks until lawmakers need to return to vote on a deal or address the debt ceiling and keep the government from defaulting, whatever comes first.

Pelosi and her leadership team did discuss another procedural vote on the president’s infrastructure and spending packages — a wonky procedural tactic to formally link the bills and show forward momentum on the bill. But moderates shot down the idea, and leadership dropped it by dinnertime Friday.

Instead, Democrats passed a 30-day patch for a highways funding program and sent their lawmakers home.

“Everybody’s hung up on, it has to be this date or that date, this hour or that hour. What we want is to pass two bills. ” said Rep. Jim McGovern (D-Mass.).

“They’re listening to the progressives, also understanding that we have other wings in our party too. We have to listen to everybody and that’s what’s happening right now.”