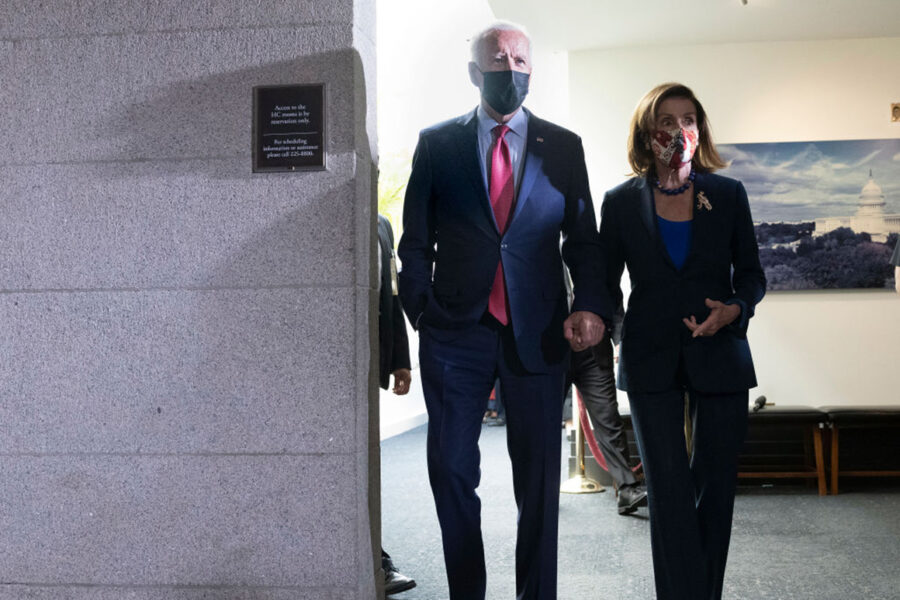 After strongly signaling to progressives this week to hold the line on their demands for a massive climate and social spending bill, President Joe Biden took a trip to the Hill on Friday to deliver another message: prepare to eat half the loaf.

In remarks to House members, Biden warned progressives that they would likely have to accept a reconciliation bill with a price tag between $1.9 trillion and $2.3 trillion — well below the $3.5 trillion they’d initially priced for. To sell the deal, Biden argued that even at that reduced level, the party would still be making “historic” investments.

The early indication is that Biden will get some leeway from progressives in large part because he backed their demands around the sequencing of his two major bills. The president disappointed moderates when he downplayed the need to hold a vote this Thursday on an infrastructure bill that they have championed.

Instead, he stressed that he wanted to get both bills ready to go first before voting on any individual one.

“It doesn’t matter whether it’s six minutes, six days or six weeks — we’re going to get it done,” Biden told reporters during the Capitol visit.

Biden’s trip to the Hill and his downplaying of the need for quick action underscored the collective strength that Democrats’ progressive caucus in the House now has in a closely-divided chamber. And it raised questions as to whether those progressives would continue to stick together to oppose Biden’s call for a more modest-sized reconciliation bill — questions Biden sought to address head-on by stressing that the bill would significantly advance his economic agenda.

“I wrote the damn bill… Even a smaller bill can make historic investments — historic investments in childcare, daycare, clean energy. You get a whole hell of a lot of things done,” Biden told them, according to a person familiar with his remarks. “We can be consequential and build upon [the Covid-relief bill], not pull back from.”

“I know a little bit about the legislative process,” he said. “I don’t recall before, on fundamental issues … that we don’t have to make compromises.”

The comments come at the end of a week that began with big expectations — but also high uncertainty — for Biden’s agenda. It wound down with the fate of that agenda still up in the air. Biden entered the Capitol on Friday with great fanfare, an entourage of nine White House aides in tow. Ultimately, he walked out empty-handed, a deadline set by Speaker Nancy Pelosi having come and gone and tensions between factions of his party still evident.

Moderates expressed frustration that Biden was giving tacit approval to progressives to hold up the infrastructure package, which had passed the Senate with full Democratic support as well as the backing of 19 Republicans.

In his remarks to lawmakers, Biden said that without support from House progressives, he didn’t think there were enough votes to pass the infrastructure bill in that chamber. A source familiar with his comments said Biden added that if he felt there were the votes there for the infrastructure, he would have pushed for it.

The White House has also argued this week that the demands made by progressives — that child care services be expanded, climate change action taken, and elder care assistance extended — were simply reflections of Biden’s own Build Back Better plan.

Now the good will that the White House has built up with the left is set to be tested.

“Progressives were Biden’s best friend this week for keeping the ceiling high,” said Adam Green, co-founder of the Progressive Change Campaign Committee. “The standard is going to be less about a dollar amount and more, are we funding all the key priorities Democrats promised for a viable amount and getting them off the ground?”

Zac Petkanas, a senior adviser for advocacy group Invest in America Action, which has been working to pass the reconciliation package, acknowledged that Biden told progressives to expect less. But, he argued, he also told moderates they had to give more.

“This was a rallying cry for members of Congress to get this done,” Petkanas said. Part of Biden’s message, he said, was to convey that “the policies of creating jobs and lowering taxes and lowering costs are too important, and they’re tied in with a political necessity, heading into the midterm elections. Everybody’s fate here is tied together.”

Ben Tulchin, a Democratic pollster who has worked for Sen. Bernie Sanders (I-Vt.), among others, said progressives have been wise to stand their ground on the party-line social spending bill, and suggested that — as negotiations now intensify around the reconciliation package — Biden should be fighting harder for what will likely be his best opportunity to address a raft of programs from health care to education to climate.

“I was hoping that he would learn the lessons from Obama, which is you got to fight for this thing. You can’t just negotiate with Joe Manchin and Kyrsten Sinema. You got to go to war. That’s what this is,” Tulchin said.

Such a fight, Tulchin said, could include travel to the senators’ home states of West Virginia and Arizona to deliver a message to residents: “You all support this and your two senators should, too!”

But Tulchin acknowledged that slamming the two senators was not part of Biden’s nature. And, in a reflection of the political calculations and compromises that the left now must make, he also reasoned that passing the two bills would be an essential component of the Democratic Party’s push against the historic political headwinds of the upcoming midterms.