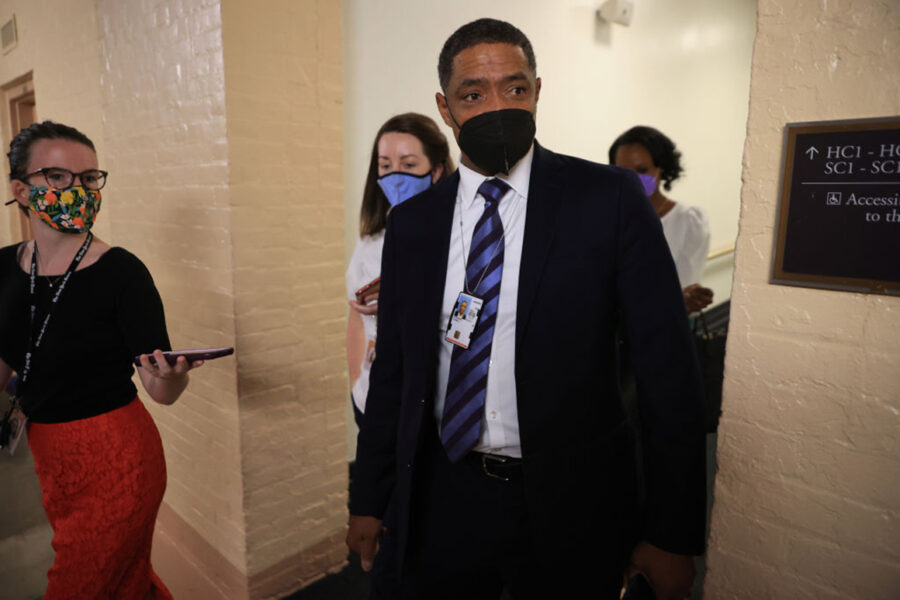 White House senior adviser Cedric Richmond said Sunday that White House officials do not have a set timeline for passage of President Joe Biden’s legislative agenda after a House vote on a bipartisan infrastructure bill was delayed last week.

“We don’t have a time frame on it. This is just about delivering and making sure that we deliver both bills to the American people because it meets their needs,” Richmond told “Fox News Sunday” in an interview. Richmond was referring to both the infrastructure bill as well as a $3.5 trillion spending plan Democrats are seeking to pass.

“We’re not using an artificial timeline, and we’re not concerned with process,” he added. “We’re concerned about delivering.”

Richmond’s remarks come after House Speaker Nancy Pelosi postponed a planned vote last Thursday on the infrastructure bill amid infighting between Democratic progressives and moderates over the president’s massive climate and social spending proposal. Congressional Democrats previously had set Sept. 27 as a deadline for final passage of the infrastructure bill.

House moderates — buoyed by new reluctance from Sens. Joe Manchin (D-W.Va.) and Kyrsten Sinema (D-Ariz.) about Biden’s spending plan — are pushing for an immediate vote in their chamber on the infrastructure bill that cleared the Senate in August.

Meanwhile, House progressives are refusing to back the infrastructure bill until they secure further assurances from their moderate colleagues on Biden’s spending plan — and a commitment that both pieces of legislation will reach the president’s desk in tandem.

With Republicans largely avoiding the legislative battle, Biden sought to sell both planks of his agenda to House Democrats in a visit to Capitol Hill last Friday. Although he warned progressives they would likely have to accept a significantly curtailed spending plan of between $1.9 trillion and $2.3 trillion, he also disappointed moderates by stressing that there was no rush to hold a vote on the infrastructure bill.

Sen. Bernie Sanders (I-Vt.), chair of the Senate Budget Committee, echoed Biden in an interview on NBC’s “Meet the Press” on Sunday, saying he was indifferent about artificial deadlines as talks between factions of congressional Democrats continued.

“This is a long and complicated process, which is dealing with the most consequential piece of legislation probably since the New Deal in the Great Depression,” Sanders said. “It’s a big deal, and it’s not going to happen overnight.”

“The president is absolutely right,” he added. “It doesn’t matter whether it’s next week or three weeks from now. What matters is that we finally address the problems facing working families. That’s what matters.”

Rep. Pramila Jayapal (D-Wash.), chair of the Congressional Progressive Caucus, told CNN’s “State of the Union” in an interview Sunday that her progressives were not focused on the final price tag of Biden’s spending plan but were instead concerned with whether enough of their desired programs made it into the finished version of the legislation.

“We’re not thinking about the number,” she said. “And the president said this to us, too. He said, ‘Don’t start with the number. Start with what you’re for.’ And that’s what he’s asked them for. And then, let’s come to the number from there. So, that’s how we’re thinking about it.”

However, Jayapal did firmly reject a $1.5 trillion figure for the spending plan which Manchin proposed to Senate Majority Leader Chuck Schumer in July, as POLITICO reported last Thursday. “That’s not going to happen,” she said.

Rep. Alexandria Ocasio-Cortez (D-N.Y.) also declined to elaborate on what exact number House progressives would ultimately accept for the spending plan and stressed the importance of its component parts — including provisions related to climate change, which she described as nonnegotiable.

In an interview on CBS’s “Face the Nation,” Ocasio-Cortez went on to accuse Democratic moderates in the House and Senate of blocking the will of the majority of the party’s congressional lawmakers, as well as thwarting the White House’s broader agenda.

“Progressives are trying to skin this cat nine different ways, but moderates are not really coming to the table,” she said. “And I don’t even want to call them moderates because there’s a lot of moderates in the party that don’t like being associated with some of these hard-line tactics. It’s a very tiny cadre of conservative Democrats.”

Senate Majority Whip Dick Durbin (D-Ill.), in an interview Sunday on CNN, reiterated his support for a $3.5 trillion spending plan but acknowledged he did not know what the eventual cost of the legislation would be.

“I’m listening to Kyrsten Sinema and Joe Manchin — as Chuck Schumer is — every single day and deciding, what will it take to bring them across the finish line?” he said. “We absolutely need them.”