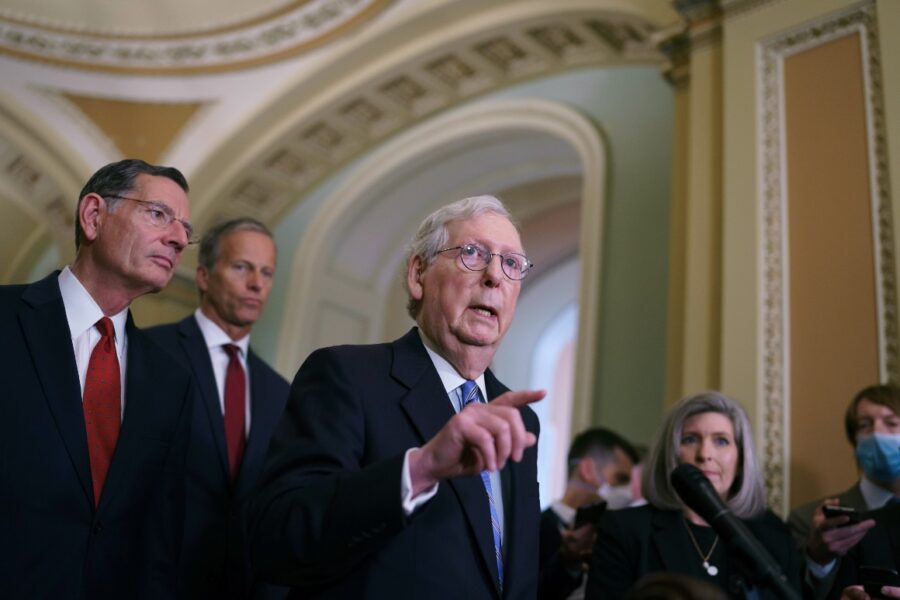 Democrats are planning to accept an offer from Mitch McConnell to let them raise the debt ceiling into December without a GOP filibuster, multiple senators said after a closed-door caucus meeting on Wednesday.

Senate leaders were working to finalize the deal on Wednesday night, effectively deciding to kick the can on the stalemate over the nation‘s borrowing limit for the next two months. But even as Democrats accepted part of the Senate minority leader’s entreaties, they pledged to reject his demands that the majority party use the laborious process of budget reconciliation to pass a longer debt ceiling increase.

“We’re going to raise the debt ceiling and we’re going to go on and pass infrastructure,” said Sen. Tammy Duckworth (D-Ill.). “We’re never going to do it through reconciliation.”

Democrats’ decision tees up a vote as soon as Thursday on the short-term debt patch. It also sets the stage for a year-end convergence of Congress’ major fiscal agenda items, with government funding currently set to expire on Dec. 3. After weeks of partisan jostling over GOP resistance to a stand-alone debt hike that Democrats warned put the nation at risk of default, the impasse appears to have ended in a pause rather than a resolution — as both sides claimed victory.

“We have to see the final wording on the offer … we view this as a temporary victory,“ Sen. Tammy Baldwin (D-Wis.) said.

McConnell first discussed his debt ceiling offer with moderate Democratic Sens. Joe Manchin of West Virginia and Kyrsten Sinema of Arizona in phone calls earlier Wednesday, according to multiple people familiar with the calls. The two hold the keys to the future of the filibuster and shortly after Manchin announced he did not support altering the filibuster for the debt ceiling.

The drama began when, as the GOP prepared to thwart another debt ceiling suspension, McConnell offered Democrats an escape hatch entirely on his terms. After discussing a way to expedite a higher borrowing cap through reconciliation, McConnell released a statement offering Democrats several ways to avoid a default in the coming days.

Each option involved drawbacks for Democrats and was intended to make them raise the debt ceiling to a fixed number, rather than a suspending a limit until a certain point in the future. Democrats responded by deciding to take only the short-term relief option.

In the statement, McConnell said his party would allow Democrats to lift the debt ceiling through November in order to avoid an imminent default, albeit at a fixed number that could spark attack ads against the president’s party. He also said his party would “assist in expediting” the reconciliation process for raising the debt ceiling, which Senate Majority Leader Chuck Schumer has resisted because he says it takes too long and is too risky.

Schumer, on the other hand, wants Republicans to help Democrats break a filibuster on suspending the debt ceiling through next year’s midterms, or at least drop their filibuster. McConnell and GOP senators had refused to do that, leading to the current stalemate — and what was expected to be a failed vote Wednesday on a longer-term suspension.

In his statement, McConnell said his party’s options “will moot Democrats’ excuses about the time crunch they created and give the unified Democratic government more than enough time to pass standalone debt limit legislation through reconciliation.”

McConnell’s statement was meant as a conversation-starter, according to Republican senators, who say the GOP leader wants to begin negotiations with Schumer. The two leaders have blasted each other on the Senate floor repeatedly for their positions.

Republicans want to keep “the onus on Democrats to raise the debt ceiling all on their own,” said one attendee at Wednesday’s meeting. “But of course there are other players than the 50 of us, because Mitch needs to have room to negotiate with a key Democrat or two and negotiate with the Democratic leader,” they added, referring to Manchin and Sinema.

Senate Republicans were set to reject Schumer’s third effort in two weeks to lift the debt ceiling, or the cap on what the government borrows to pay the bills. Democrats would have needed 10 Republican votes to proceed with a debt limit suspension bill, which they could then approve with a simple majority. But GOP senators were insistent on not helping Democrats tackle the borrowing limit as the majority party pursues multitrillion-dollar spending plans.

Democratic leaders had planned to use the failed vote to continue hammering Republicans as irresponsible for gambling with an issue that often requires bipartisan cooperation and could have enormous consequences for the global economy. Meanwhile, the Biden administration has said the Treasury Department could run out money in as little as two weeks.

Before McConnell’s offer, Senate Democrats had expected to hold a special caucus meeting. They ended up discussing quite a different matter, emerging with projections of victory over the minority leader.

“Democrats have been clear from the start; we’ll do the responsible thing,” Schumer said on the floor Wednesday.

Even if the Senate can pass its short-term debt bill before the end of the week, it’s not clear how fast the House will move in response. House Democratic leaders had promised their members 72 hours’ notice before any votes that might be set during a scheduled recess, and many lawmakers have planned work travel in the coming days.

As the GOP debt blockade threat intensified, Democrats mulled a number of off-ramps, including making an exception to the filibuster rules for debt ceiling legislation. That would take away Republicans’ ability to block the effort.

But detonating the filibuster to raise the debt ceiling would only have worked if all Democrats were on board. And while President Joe Biden signaled on Tuesday that a filibuster workaround is up for discussion, Manchin rejected the idea Wednesday morning. Sinema hasn’t indicated whether she’ll support that approach, which both parties could weaponize to advance their policy priorities.

While McConnell insists they use budget reconciliation, Democrats continue to vow they won’t raise the debt limit on their own. Democratic leaders say that reconciliation, the same special budget maneuver that they’re deploying to pass Biden’s massive social spending plans, would prove too time-consuming and arduous.

McConnell’s short-term extension offer on Wednesday was an effort to alleviate those concerns. It’s not yet clear how his GOP senators will respond to Democrats’ decision to take only half of their escape hatch.

Sen. Mitt Romney (R-Utah) noted that even the credit rating agency Moody’s expects Democrats to raise the debt ceiling through reconciliation in time to avoid a breach of the borrowing limit.

“I’m telling people there will not be a default and that Democrats have proven that they can tax as they want, spend as they want and raise the debt ceiling as they want,” Romney said. “Moody‘s came out yesterday and said don’t worry about it, and I think that’s at least as assuring as my comments.”

But Democrats continue to distance themselves from reconciliation as an option, which Republicans could ultimately use as a political cudgel during the midterms next year if the majority party is forced to settle on a new debt limit figure through the process.

“The Republicans have to allow us this vote tonight and we will own this because they’re afraid to,” she said. “We are governing, and we’re not going to let a bunch of people’s interest rates go up and cause havoc across this country simply because they’re trying to play politics. This is a time to govern.”