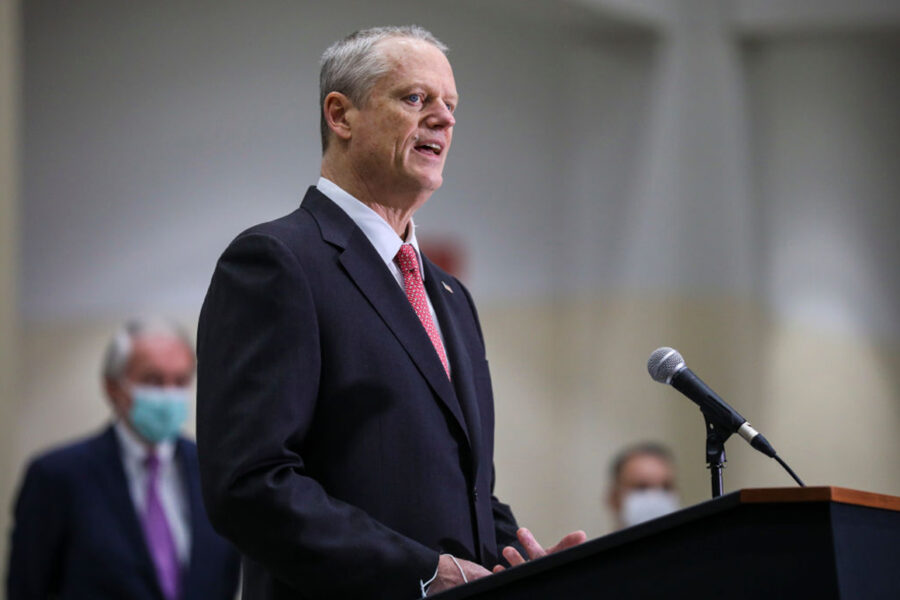 BOSTON — Former President Donald Trump took his score-settling tour to Massachusetts this week in the hope of sticking it to Republican Gov. Charlie Baker.

He might have done Baker a wicked huge favor.

The two-term governor is weighing another run, meaning a Republican could defy national trends to lead this solidly blue state for a third term.

By endorsing conservative Republican Geoff Diehl’s primary challenge on Tuesday, Trump underscored Baker’s distance from the national party and his persistent criticism of the former president in one of the most anti-Trump states in the nation.

“Sometimes it is good to have a foe,” said former GOP Gov. Jane Swift. “Trump does not appeal to Massachusetts independents, so it will not help [defeat Baker]. It will actually likely help to define [the Baker ticket] as ‘not that type of Republican.’”

Trump’s support for Diehl fits the model of his post-presidential endorsements, which tend to reward allies and punish enemies. In Baker’s case, the governor is most definitely the latter.

Baker has said that he left his ballot blank in 2016 and again in 2020, rather than vote for Trump. What little relationship they had fell apart during the pandemic. Baker became a more vocal Trump critic in the final year of the president’s term and afterward, when he supported his second impeachment and rejected his unsubstantiated claims that the 2020 election was rigged.

Baker’s stance toward Trump played well in a state that gave Trump barely one-third of the vote in his two presidential runs — despite governing one of the bluest states, Baker ranks as one of the nation’s most popular governors.

“It is clear that the endorsement is more about the former president’s view on Governor Baker than it is about Geoff Diehl,” said Amy Carnevale, a Republican state committeemember who was a Trump delegate in both 2016 and 2020 but also supports Baker.

Baker responded to Trump — who slammed the governor as a “RINO” who is “definitely not an American First or Make America Great Again kind of guy” — by shrugging his shoulders.

“In some respects, I’m not surprised for a whole bunch of reasons,” Baker said during an unrelated press briefing Wednesday. “But the bottom line is I’m really focused on Covid, focused on getting people back to work and focused on making sure that kids have the opportunity to go to school in person this year and trying to get us back to what I would describe as normal as fast as possible.”

In Diehl, Trump lined up behind a long-shot candidate who’s already been smoked statewide by Sen. Elizabeth Warren in the 2018 Senate race. When Diehl first made his bid official in July, he wasn’t so sure he wanted Trump’s stamp of approval, saying “I’d rather leave national politics out of this race.”

But he’s been inching ever-closer to Trump since then, first calling for a forensic audit of the Bay State’s 2020 election results in August before proclaiming Monday — one day before Trump’s announcement — that the entire contest was rigged.

The endorsement will likely give Diehl a boost with the state’s pro-Trump GOP base. Republican strategist Wendy Wakeman said Trump’s backing could also make Trump-aligned donors outside of the Bay State give Diehl a hard look.

“It legitimizes Diehl’s campaign, gives it a little bit more exposure,” Wakeman said. “People nationally will look at Geoff who would have never looked at him before, and that’s important. His fundraising advantage is with the national givers.”

Despite his popularity, Baker isn’t unassailable in a primary. His moderate brand of politics has alienated a faction of the GOP, making him more popular with Democrats and independents than among his own party’s base.

“Charlie Baker may not be a progressive or uber-conservative dream. But in a state where 57 percent of the electorate is unenrolled, he is the perfect governor,” former Massachusetts GOP Chair Jennifer Nassour said.

Baker is also well-regarded among the Massachusetts Republican and business-minded donor class, who are already opening their checkbooks even though he hasn’t yet announced whether he will run for reelection. Last month, the governor posted his highest monthly fundraising haul in two years, and his war chest is 25 times larger than Diehl’s, who only has $26,000 on hand.

Baker, who’s been taking his time making up his mind about whether to run for a third term, reiterated Wednesday that it’s a “very personal” decision that he will make with his wife.

If he doesn’t make a go of it in 2022, “Trump is certainly going to say it’s because of his endorsement,” Wakeman said.

Should Baker decide to run again next year, though, he will begin as the favorite. After a narrow two-percentage-point win in 2014, Baker cruised to reelection with 67 percent of the vote in 2018.

Still, Trump’s endorsement of Diehl could prove to be a gift to Democrats, Suffolk University pollster David Paleologos said, if it leads to a competitive primary that forces Baker to spend money and move rightward.

But unlike in other states where Trump’s support for a primary challenger has endangered an incumbent’s prospects, few here expect his endorsement of Diehl will have a dramatic effect on the contest.

“It will be a political headache [Baker] probably wished he didn’t have to deal with, but I don’t think he will struggle too much to win a primary,” said Colin Reed, former campaign manager to Sen. Scott Brown.