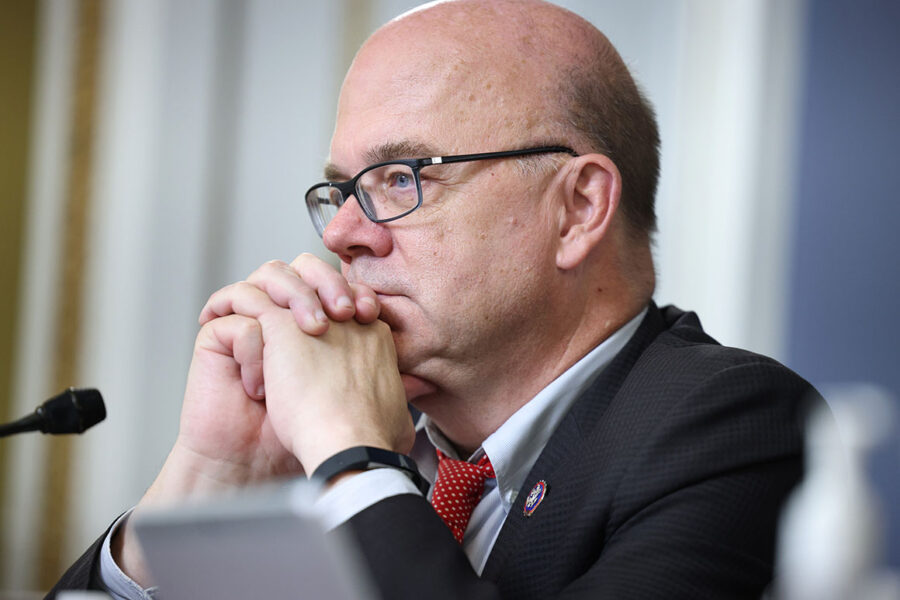 The House approved a bill on Tuesday to briefly alleviate the squeeze of the debt limit, warding off an economically destructive default for just over seven weeks.

President Joe Biden is expected to sign the legislation in short order, allowing the Treasury Department to keep paying loans for the nation’s more than $28 trillion in debt. The extra borrowing power is estimated to last until about Dec. 3, the same day government funding will expire. That patch is far shorter than the 14-month fix Democrats had to abandon after Senate Republicans repeatedly sunk the majority party’s long-range plan for lifting the cap on the nation’s credit.

“Nobody has clean hands when it comes to the debt limit,” House Majority Leader Steny Hoyer said before the vote, after months of partisan sniping over who’s responsible for racking up the government’s bills.

“This is our debt. This is America’s debt,” said Hoyer (D-Md.). “Some of it relates to greater spending promoted by both sides of the aisle. But for any one of us to get up and say, ‘It’s your debt‘ — it’s America’s debt and America pays its bills.”

At the same time, Hoyer panned the two-month patch as an “irresponsible and despicable act for adults who know better.”

As his panel met to prepare the bill for floor action on Tuesday, House Rules Chair Jim McGovern (D-Mass.) said, “I’m glad that this at least allows us to prevent a totally self-made and utterly preventable economic catastrophe as we work on a longer-term plan.”

If Congress nears the early December debt deadline without a solution in reach, the Treasury Department may be able to keep paying the government’s bills on time for a little while longer, depending on federal cash flow. But the agency will not be able to deploy the kind of “extraordinary measures” it used over the summer to keep default at bay for months.

Raising the debt limit allows the government to keep financing federal spending that has already been authorized by Congress, but it does not account for either party’s future spending plans.

There are hopes that linking the new debt cliff with the next shutdown threat could finally spur the kind of cross-party talks necessary for striking a final deal to fund both the military and non-defense programs for the fiscal year. Bipartisan negotiations on those essential spending measures have been on hold as Democrats spent the spring and summer focused on the infrastructure and social spending plans they have yet to enact, while repeatedly bowing to Republican pressure to boost Pentagon funding by more than $25 billion above Biden’s request.

As of Tuesday afternoon, more than 160 House members had indicated they would not return from recess for the in-person vote on the issue. Instead, those lawmakers plan to vote by proxy, a practice launched during the pandemic that allows one lawmaker to vote on another’s behalf.

The House also did not hold a stand-alone vote on the two-month debt limit increase. Rather, the lower chamber automatically approved a $480 billion increase for the debt ceiling when lawmakers voted for a procedural measure to tee up floor debate, in a process known as “deeming.”

Rep. Tom Cole (R-Okla.), the top Republican on the Rules Committee, slammed Democrats for playing “a game of smoke and mirrors so they don’t have to be on the record about substantive items.”

Rep. Michelle Fischbach (R-Minn.) said expediting the legislation amounts to “an insult to the members of this body, who are being denied the opportunity to fully consider the gravity of extending the debt limit.”

“This accomplishes nothing more than kicking the can down the road on something that should be addressed now,” she said on the floor before the vote.

Earlier Tuesday, McGovern noted that the House already voted last month to suspend the debt ceiling into December of next year. But that measure hit a wall of Republican resistance in the Senate.

“No one’s hiding from anything,” McGovern said. “We all went on record voting yes or no.”

The partisan barbs in the House pale in comparison to the drama that unfolded in Senate last week, when Republican leaders scrambled to find 10 GOP senators willing to break ranks with the rest of the party and advance the measure over a filibuster. Democrats then passed it with a majority threshold.

Before final passage of the debt limit legislation, Sen. Joe Manchin (D-W.Va.) and several Republican senators privately scolded Senate Majority Leader Chuck Schumer for delivering a floor speech that some members felt was “not appropriate” for the upper chamber’s bipartisan push to stave off default.

Across the Capitol on Tuesday, Speaker Nancy Pelosi said top Democrats were “just hoping we could do this in a bipartisan way.”

The stalemate between both parties to address the cap on the nation’s credit limit — culminating in a measure that only briefly pushes off what many see as a manufactured crisis — has once again exasperated both lawmakers and budget experts and prompted calls to scrap or reform the debt limit.

Pelosi said Tuesday that one piece of legislation to overhaul the debt limit “has merit.” The bill, proposed by House Budget Chair John Yarmuth (D-Ky.) and Rep. Brendan Boyle (D-Pa.), would charge the Treasury secretary with lifting the cap on the nation’s borrowing authority, rather than subjecting the debate to lawmakers’ political sparring. But talk of enacting such an overhaul is not serious in the current Congress.