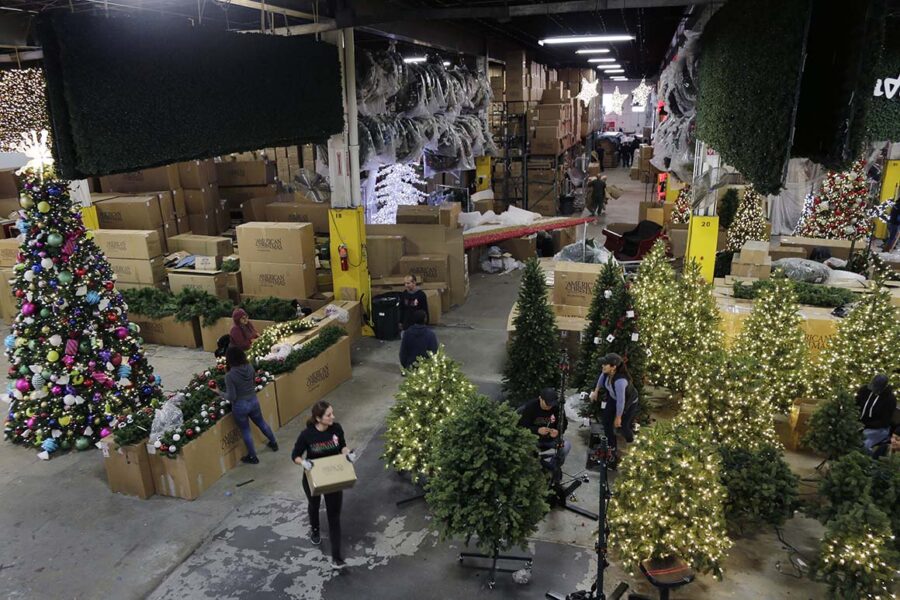 President Joe Biden is rushing to relieve congestion across the nation’s complex shipping supply chain as it threatens to disrupt the holiday season for millions of Americans.

With just over 10 weeks until Christmas, the White House is leaning heavily on port operators, transportation companies and labor unions to work around the clock unloading ships and hauling cargo to warehouses around the country. Biden will meet virtually Wednesday with industry leaders before delivering a speech on the administration’s efforts to address the bottlenecks.

The supply-chain mess risks creating new economic and political turbulence for Biden in the coming months. Empty store shelves could undermine the administration’s economic recovery plans and weigh on consumer confidence. And memories of a disappointing Christmas could linger into 2022, with supply-chain problems expected to last much longer than many officials and economists expected just a few months ago.

There’s a growing fear among retailers that Washington’s efforts can do little at this point to save the all-important holiday shopping season.

“There’s no political intervention that’s going to get this done, and there may not be a human intervention that gets this done because this issue is now going to last well into next year,” said Steve Pasierb, the president and chief executive of the Toy Association.

To date, the Biden administration has put much of the onus on the private sector to fix the snarls, despite calls from some industry groups to marshal more federal resources. Senior administration officials say the government has limited oversight of ports and shipping companies. Instead, it has used its heft to convene players throughout the supply chain and put pressure on them to expand their operating hours.

On Wednesday, the White House will announce that the Port of Los Angeles will remain open 24/7, moving to a schedule that the Port of Long Beach adopted three weeks ago. Together, those California ports have the worst backlog in the country, with 80 ships waiting to dock as of Tuesday night, according to the Marine Exchange of Southern California.

Administration officials acknowledge those steps alone won’t clear the backlog, which has only continued to grow over the past several months. They’re hoping Wednesday’s announcements will prompt additional retailers, long-haul trucking firms and train operators to act until the entire supply chain is working nonstop.

“By taking these steps, they’re saying to the rest of the supply chain: ‘You need to move, too. Let’s step it up,’” the official said.

Industry groups want to see the administration do its own stepping up. Some have suggested shipping containers be temporarily moved off docks and onto federal or state land so ships can unload faster, while others have called for military resources and defense funding to be brought to bear.

The challenges stressing global supply chains have been months, if not years, in the making. The pandemic created a staggering surge in demand for consumer products. What’s more, factories and ports in Asia have experienced temporary closures due to Covid-19 outbreaks, extreme weather and electricity outages in China, all of which contribute to shipping delays, product shortages and higher costs.

It’s not that less cargo is moving. In fact, ports are processing record levels of imports, and the cost of shipping containers has skyrocketed to unprecedented heights in recent months due to demand. The supply chain simply cannot keep pace with the elevated demand for goods — and industry players expect that strain to persist.

In August, the administration tapped John Porcari, a former deputy secretary of transportation, for a six-month post tasked with alleviating congestion at ports — a key choke point in the supply chain. Porcari’s job is to “knock the heads and get the immediate backlogs cleared up,” as the White House’s senior director for international economics and competitiveness, Peter Harrell, put it.

But Porcari’s primary recourse has been to call meetings with companies at different steps along the shipping process and encourage them to extend their hours and share information about obstacles.

Those calls are happening frequently. Gene Seroka, executive director of the Port of Los Angeles, is on the phone with administration officials multiple times per day, he said, providing status updates on the port’s operations and coordinating on new White House initiatives with others in the supply chain.

“Everything we’ve done is incremental,” Seroka said, but those small changes are yielding results, such as reducing the amount of time cargo sits before being taken away on trains.

Porcari is working under the Supply Chain Disruptions Task Force that Biden established in June. That group has been looking for short-term solutions to ease the strain. But the summer start date left little time to do much before the busy season for holiday shipments started in earnest in September.

In the meantime, large retailers like Costco, Walmart, Amazon and Home Depot are chasing their own workarounds. Seroka said some companies placed holiday orders early in anticipation of delays and dispatched regional delivery drivers to transport cargo away from the ports. Others have chartered vessels to transport their own shipping containers or re-routed their deliveries to ports outside California to reduce delays.

“The larger companies have more leverage and flexibility to do more within their supply chain than smaller companies do, so you’re certainly seeing a variety of impacts on companies across the board,” said Jonathan Gold, the National Retail Federation’s vice president of supply chain and customs policy.

Independent analysts predict the crunch will last well into the future, forcing the administration to work on long-term solutions as well.

“We might not be able to achieve short-term solutions right now, but focusing on it now so we don’t run into these kinds of issues in the future is critical,” Gold said.

The Biden administration has highlighted the bipartisan infrastructure package, which contains more than $200 billion in new spending for transportation upgrades to ports, airports, railways, roads and bridges.

The package enjoys widespread support from industry groups who say U.S. systems have fallen behind rival economies. China, for instance, has invested incredible sums in its own infrastructure in recent decades and continues to do so. But even if the legislation wins House approval and lands on Biden’s desk before year’s end, it won’t help companies weather the current crisis.

“That’s kind of like planting an orchard to deal with hunger today,” said Steve Lamar, CEO of the American Apparel & Footwear Association, whose members heavily rely on deliveries from Asia.

Biden also signed an executive order in July targeting consolidation in the shipping container industry, which he said has harmed American exporters. It instructed the Federal Maritime Commission, an independent federal agency that regulates ocean transportation, to prevent shippers from imposing excessive charges. The order also asked the commission to probe competition concerns in coordination with antitrust authorities.

Dan Maffei, chair of the Federal Maritime Commission, acknowledges that investigations into excessive fees and market consolidation aren’t solutions to the holiday crunch, either. Maffei said he is sympathetic to the plight of parents as the father of a 7-year-old child, but he expects they can find alternatives even if stores sell out of the hottest toys.

“The bottom line is that there are challenges — because of the demand, because of the systemic issues — that affect the supply chain,” Maffei said. “They are not going to cancel Christmas but are maybe going to make it so that you can’t get the exact toy you want for your kids.”