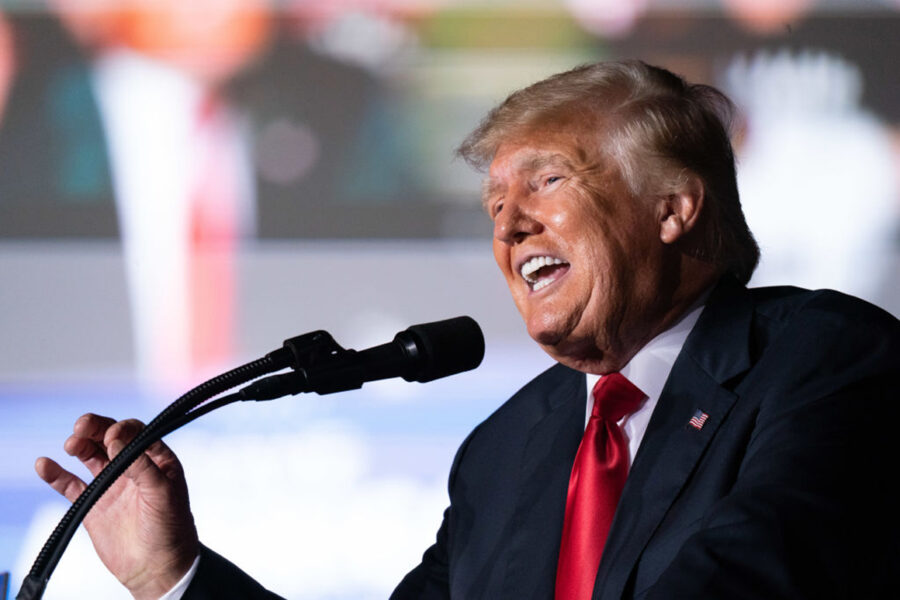 Donald Trump is suing the Jan. 6 select committee and the National Archives to block the release of his White House’s records related to the Capitol attack.

The former president’s lawyers filed the 26-page suit in D.C. district court on Monday, declaring the committee’s investigation “a vexatious, illegal fishing expedition.” It names the Jan. 6 panel’s chair, Rep. Bennie Thompson (D-Miss.), and the national archivist, David Ferriero, along with the committee and the archives themselves.

Trump’s legal team contends that the Jan. 6 panel’s push for voluminous records from his administration — such as his internal communications with lawyers, campaign operatives and senior officials — would shatter the notion of executive privilege. In their suit, Trump’s lawyers ask a federal judge to invalidate the entire request from the select committee, to block the Archives from turning over any materials to Congress in response to the request, and to specifically block the Archives from turning over any documents that Trump says are covered by executive privilege.

Trump’s team is also asking for the court to have the Archives first identify all documents from Trump’s White House that could be responsive to the request, then let Trump’s lawyers fully review them before sharing them with Congress. That process could take years.

The lawsuit kicks off a complex, high-stakes legal fight over congressional investigations and executive privilege. In the Nixon era, the Supreme Court acknowledged that former presidents may have an interest in shielding documents from public view. But this is the first public legal dispute between a current president and his predecessor over whether to assert executive privilege.

The thrust of Trump’s claim is twofold, arguing first that the Jan. 6 committee’s request for documents is so broad as to be unconstitutional. Secondly, the suit asserts that the committee lacks a legitimate “legislative purpose” for pursuing the documents. Both arguments were features of a lawsuit Trump lodged in 2019, when Democrats sought to obtain his financial records from the accounting firm Mazars USA.

That Mazars fight resulted in a Supreme Court decision that found limits to congressional probes related to sitting presidents — not former ones — but also underscored Congress’ broad power to demand information related to its legislative efforts.

In contending that the Jan. 6 panel lacks a valid legislative purpose for seeking the White House records, Trump’s team is leaning on a requirement for congressional investigators to prove that they seek materials to aid in their legislative work.

“[T]he Committee has read its own charter — ‘to investigate and report upon the facts, circumstances, and causes relating to the events of January 6, 2021, at the United States Capitol’— expansively, and apparently believes it has been given a free pass to request a sweeping set of documents and records,” Trump’s team argues.

The select committee has previously brushed off claims that it is conducting an investigation without a legislative goal. The resolution establishing the committee identified multiple policy areas it may legislate on — from domestic extremists’ use of social media to the intelligence agencies’ handling of threat information to the security posture at the Capitol.

Trump’s suit also zeroes in on the Presidential Records Act, the federal law governing access to White House documents. Trump’s lawyers argue that if the Act permits a sitting president to overrule a former president on privilege, then it’s unconstitutional. That question has never been fully fought out in court.

The complaint argues the court should also block the Archives from sharing materials that Trump deems privileged. Many legal experts hold that only the sitting president can assert executive privilege. But a court has never ruled on whether — and just how far — that privilege extends after a president leaves office.

The suit also asks the court to slow down the process of sharing the documents with Congress. Trump’s lawyers argue that they need more time to review documents that are responsive and that they shouldn’t have to make determinations about executive privilege without seeing all the records in context.

It normally takes years for the Archives to sort through and organize White House records. If a judge blocked the release of any documents until the archivist has gone through all of them, then, Congress could be forced into a significant delay before obtaining the materials in question.

“Today, President Donald J. Trump filed a lawsuit in defense of the Constitution, the Office of the President, and the future of our nation, all of which the sham Unselect Committee is trying to destroy,” Trump spokesperson Taylor Budowich told POLITICO in a statement. “The fact is America is under assault by Pelosi’s Communist-style attempt to silence and destroy America First patriots through this hyper-partisan and illegitimate investigation.”

The suit was filed on Trump’s behalf by Jesse Binnall, an attorney who previously partnered with Sidney Powell to overturn Michael Flynn’s guilty plea and who helped Trump attempt to litigate complaints of election fraud in Nevada.

Trump’s executive privilege lawsuit was months in the making. The Jan. 6 select committee asked the National Archives in late August for voluminous records related to Trump administration communications on the day of the attack. It also asked for documents going back to April 1, 2020, related to Trump’s plans for the presidential campaign, including records related to polling and any documents given to Trump predicting he might lose his re-election bid.

Following that request and according to standard practice, the head of the archives then sent hundreds of pages of those records to Trump and his lawyers to review. That was just the first batch of material; the archivist is still reviewing reams of documents for records that may also be responsive to the request, and is sending those records to Trump for review on a rolling basis.

Trump and his team determined that at least three dozen of the records from that first batch were covered by executive privilege — meaning that, in their view, Trump had a right to keep them secret. Trump sent a letter to the archivist on Oct. 8, which POLITICO reviewed, stating his position and telling the archivist to withhold the documents.

But the Biden White House has taken a different position on whether or not those records can be released. Biden’s White House counsel, Dana Remus, told the archivist later on Oct. 8 that the president wanted the documents provided to the Hill.

The lawsuit will likely bolster several other witnesses facing subpoenas from the Jan. 6 committee, which includes two anti-Trump Republicans. Steve Bannon, a former Trump aide and longtime political ally, has cited Trump’s claim of executive privilege to refuse to share documents and testimony with the panel. The committee is slated to hold Bannon in criminal contempt of Congress on Tuesday.

The legal fight brings a risk for Biden, since a court ruling that narrows the scope of executive privilege could help congressional Republicans target his administration’s records after he leaves office. But when asked recently about that prospect, White House press secretary Jen Psaki pointed to the unprecedented nature of the attack on the Capitol.

“I can assure you … that this President has no intention to lead an insurrection on our nation’s Capitol,” she told reporters.

Long before Trump’s election, U.S. presidents have asserted executive privilege to keep their allies from answering questions from investigators –– and sometimes, federal judges have rejected their arguments. A federal judge struck down then-President Bill Clinton’s efforts to use the privilege to keep White House staff from answering questions in the Monica Lewinsky probe. Years later, a federal judge ordered the Obama administration to turn over documents related to the ATF’s “Fast and Furious” guns operation, despite the assertion of executive privilege.

During his presidency, numerous Trump allies pointed to executive privilege to try to dodge congressional inquiries, including during the House Intelligence Committee’s Russia probe and the first Trump impeachment.

The lawsuit comes as Trump signals he may run for president again in 2024 and as he pushes fellow Republicans to embrace the false conspiracy theory that the 2020 election was stolen from him.