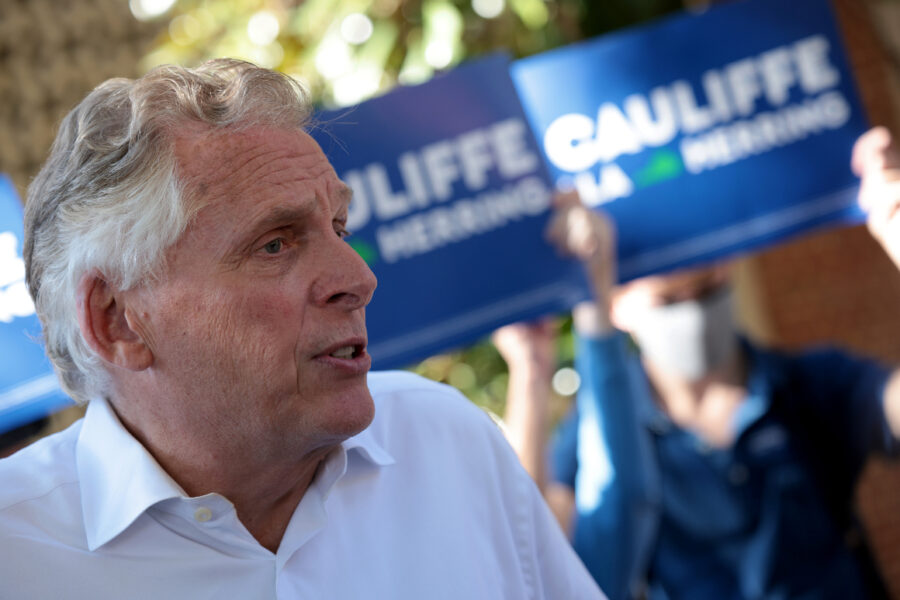 A creeping sense of worry among Democrats about the Virginia governor’s race spilled into the open on Wednesday, after the release of a new Monmouth University poll showing former Democratic Gov. Terry McAuliffe deadlocked with Republican Glenn Youngkin less than two weeks before Election Day.

And the panic may be a good thing, some of them say.

The Monmouth poll was the latest in a series of data points to increase concern about McAuliffe’s prospects. While other recent polls in Virginia have shown McAuliffe staked to narrow leads, President Joe Biden’s national ratings have slid into majority disapproval of his tenure, with his agenda still stalled in Congress. Democrats’ internal polling elsewhere is similarly bleak, as they look to keep their slim majorities in Washington. And turnout among early and mail voters, which Democrats often look to as a barometer of enthusiasm, paints an uncertain picture two weeks out.

Despite — or because of — the warning signs, Democrats hope the news will wake up slumbering supporters the way it did in California last month, when Democratic Gov. Gavin Newsom appeared to be slipping into dangerous territory in polls before generating high turnout to beat back a recall attempt with ease.

“There’s going to be panic. There’s going to be consternation. But what I would tell donors and operatives is, ‘You should be worried, so pay attention and put resources into this,’” said Tim Lim, a longtime Democratic strategist. “The same thing happened in California. Once Democrats started paying attention and keyed into it, the numbers shifted. The same can happen in Virginia.”

In the meantime, one resource Democrats are pouring into Virginia is star power. A blitz of surrogates including former President Barack Obama, Georgia Democrat Stacey Abrams, Vice President Kamala Harris and musician Dave Matthews, returning to his old stomping grounds in Charlottesville, are campaigning in the state over the next five days alone.

“This is about bringing in names they know to remind them to get to the polls,” said Jared Leopold, a veteran Democratic strategist who previously worked at the Democratic Governors Association and for Virginia state Sen. Jennifer McClellan, whom McAuliffe beat in the primary.

“Terry’s gonna call through every name in his Rolodex to see which Democratic stars he can get to which swing counties,” he continued.

The McAuliffe campaign also released a new TV ad on Wednesday starring Obama, who will stump for McAuliffe Saturday in Richmond. In the ad, the former president faces the camera and says, “Not only are you choosing your next governor, but you’re also making a statement about what direction we’re headed in as a country.”

The rush of Democratic luminaries comes as the party’s national standard-bearer lags in the polls. In the Monmouth survey, Biden’s approval rating was well underwater in a state he carried by 10 points a year ago, with 43 percent saying they approve of the job he is doing and 52 percent disapproving.

Democrats have been split on how much the logjam in Congress is hindering McAuliffe in Virginia. Some of McAuliffe’s allies in Washington — including Sen. Mark Warner, a former Virginia governor himself — have urged congressional Democrats to pass their infrastructure bill before the election to give McAuliffe a boost. McAuliffe has called for Congress to “do their job,” but he said in an interview last week he didn’t view it as necessary for his electoral chances.

The new poll also continued to show Republican voters are noticeably more enthusiastic about voting in this year’s election. Democrats say that while they’re confident about the longer-term trends in the state — Republicans haven’t won a statewide race since 2009 — the party could be in danger this year if it can’t energize its voters.

“I think we’re on track to be a blue state for years and years, because the growth here makes that inevitable. But until then, we have a lot of suburban voters who are very swingy and they decide these elections, up and down the ticket,” said Kiera Hall, executive director of Commonwealth Forward, a group working to elect Democrats in state legislative races. “We will win this if folks turn out … but everyone should be very worried.”

Youngkin has been focused on those swingy, suburban voters in the final stretch of the race. His closing message has been predominantly pinned to education, where Republicans believe he can energize base voters and win over independents.

He has also cast his faceoff against McAuliffe as a battle that stretches beyond the confines of Virginia. “This is no longer a campaign. This is a movement. It is a movement led by you, led by parents all over Virginia and all over America,” Youngkin said to close out a Tuesday night speech in Burke, Va., in the Washington suburbs.

The Monmouth poll brought promising signs for Youngkin on that front. Education was the second-biggest factor cited by Virginians as they decide their choice for governor, trailing just jobs and the economy — and surpassing the pandemic. McAuliffe and Youngkin scored similarly in terms of trust on the issue, which represents a gain for Youngkin, who trailed McAuliffe on education in earlier Monmouth polls.

“The education issue became even more heightened and it all started really in that second debate,” said former Republican Gov. George Allen, who has supported Youngkin’s campaign. “It grates people. I think it’s very helpful that we have a candidate like Glenn Youngkin, who is clearly an advocate for better education and safe schools.”

Some Democrats tried to brush off the Monmouth poll as old news, saying they knew the race all along would be close. Others noted that a poll from the university at a similar point in 2017 had Republican Ed Gillespie and Democrat Ralph Northam also very close, in a race Northam would ultimately win comfortably.

“Whether a poll shows them tied or up 5, they should be working really hard, because they know this is going to be a close election,” said Leopold. “I just remember in 2017 when Donna Brazille’s book was going to sink Ralph Northam’s campaign.”