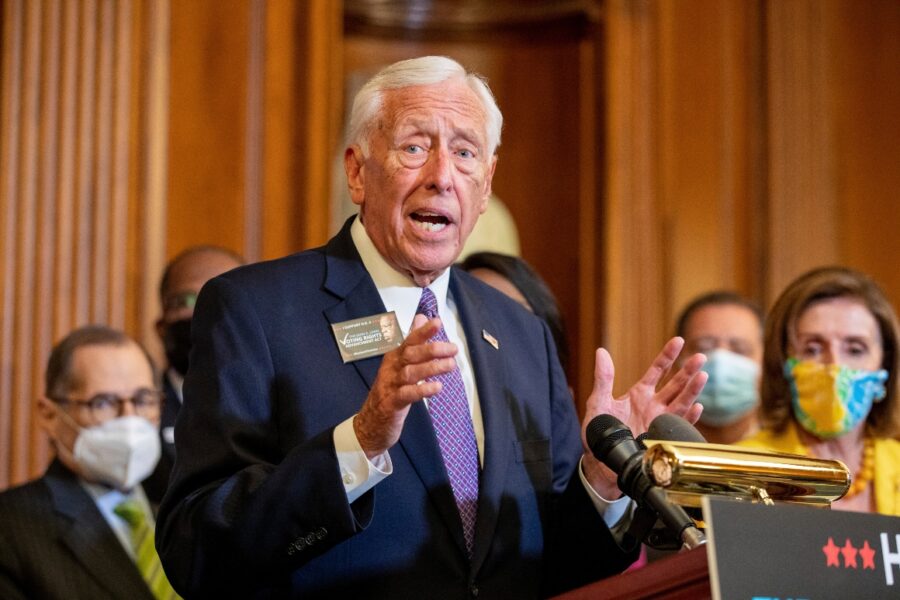 Less than 24 hours after President Joe Biden delivered a blunt assessment on how to prune the party’s signature legislative package, many Democrats’ attitudes have suddenly shifted toward acceptance.

Senior House Democrats on Wednesday emerged from a closed-door meeting with their members, their first since Oct. 1, optimistic they could secure an agreement on Biden’s mammoth $2 trillion social spending package — perhaps by the end of the week.

Many final decisions remain in limbo, and Democrats have already begun a fresh round of bargaining as they attempt to preserve priorities that Biden on Tuesday suggested could be stripped from the bill. Still, many Democrats appear to be coming to terms with the more narrow bill, prioritizing the goal to get something across the finish line.

“I think members are in a position where they want to get something done, they understand you’ve got to get everybody in the tent because we have very close margins. So I think they’ll accommodate that,” House Majority Leader Steny Hoyer told reporters as he left the meeting.

Speaker Nancy Pelosi told reporters that it is “very possible” they would reach an agreement this week.

“We continue to be on schedule,” she said. “We have a goal, we have milestones, and we have met every milestone along the way in our timetable. And we will be where we need to be to reach our goal.”

Speaking privately to the caucus Wednesday morning, Pelosi assured members that Biden remained focused on family needs. She specifically stressed the importance of child care and paid leave, telling members: “I’ve changed more diapers than anyone in this room,” per a person familiar with her remarks.

That rosy outlook among both Democratic leaders and the rank-and-file is a significant improvement over 19 days ago, when internal feuding scuttled the party’s plans to deliver a key piece of Biden’s agenda and left many House lawmakers feeling dejected as they left town for a briefly interrupted two-week recess.

Still, any agreement would require full cooperation from Democrats in both chambers, including centrists Sen. Joe Manchin (D-W.Va.) and Kyrsten Sinema (D-Ariz.), who have continued to resist supporting the deal.

“I’m not being rude but there’s too much going on,” Manchin said, demurring on talking details. “Let’s see if there’s a pathway forward.”

Senate Democrats held their chair’s lunch on Wednesday, an important step in the party’s work to hash out a rough plan in the coming days. Senate Majority Leader Chuck Schumer spoke to Pelosi and the White House on Wednesday, and said that he talks to Biden on a near-daily basis.

“Everyone is going to have to compromise if we’re going to find that legislative sweet spot we can all get behind. Nobody will get everything they want, no matter what,” Schumer said Wednesday morning. “We’re getting closer to an agreement. We want to finalize a deal by the end of this week, but we all must keep moving together.”

Not every House Democrat is on board with Biden’s proposed cutbacks, either, and some have publicly vowed to keep fighting. Several senior Democratic lawmakers groused about potentially losing some of their top priorities, after Biden suggested extending the child tax credit by only one year and entirely nixing the restoration of certain deductions for state and local taxes. He also suggested cuts to programs such as housing assistance and climate.

“A one-year extension is a mistake, and I think that it is very harmful to the country,” said House Appropriations Chair Rosa DeLauro (D-Conn.), who has championed a bill to make the child tax credit permanent.

House Financial Service Committee Chair Maxine Waters (D-Calif.) told reporters she’s been “working very hard” to preserve housing programs in the package: “I am putting a lot of heat on, to say, this is the basis for everything.”

But Waters also acknowledged cuts would need to be made, saying “adjustments are going to have to be made at every level” as they land on a total cost of the final package.

A few hours after the closed-door meeting with the caucus, Pelosi spoke to the New Democrat Coalition, a pro-business group of Democrats who have pushed for a more permanent extension of priorities like the Child Tax Credit, and addressed some of their concerns.

The speaker’s message to the group, according to chair Rep. Suzan DelBene (D-Wash.), was that Democrats had the opportunity to enact “strong policy” even if it wasn’t exactly what they wanted.

“People may have their kind of set [idea] of what the perfect policy is like, but so many things we’re talking about are really transformational,” Pelosi told the group, according to DelBene, citing paid leave as an example of a program that did not even exist before. Paid leave is among the programs currently in flux as Democrats negotiate their social spending bill.

Another contentious issue for many Democrats continues to be SALT, the cap on deducting state and local taxes imposed by Republicans in their 2017 tax law, after Biden suggested it could be out of the final bill.

A pair of Northeast Democrats, Rep. Tom Suozzi (D-N.Y.) and Bill Pascrell (D-N.J.), raised the issue in caucus. Suozzi, who has made restoring the deductions his red line in negotiations, told the room, “No SALT, no deal.”

Ways and Means Committee Chair Richard Neal (D-Mass.) agreed, saying as he left the caucus meeting that SALT “has to be on the table.” Members of that panel huddled privately later on Wednesday to discuss a slew of unresolved tax issues.

Biden delivered many of his proposed changes to a group of rank-and-file Democrats at a pair of meetings on Tuesday. But most Democrats said they had yet to see the formal proposal.

Pelosi suggested some of Biden’s floated cuts to the bill — such as scaling back paid leave programs or tuition-free community college — were not final.

“News to me,” Pelosi said when asked about those programs being scaled back. “That’s not a decision.”

Burgess Everett and Heather Caygle contributed to this report.