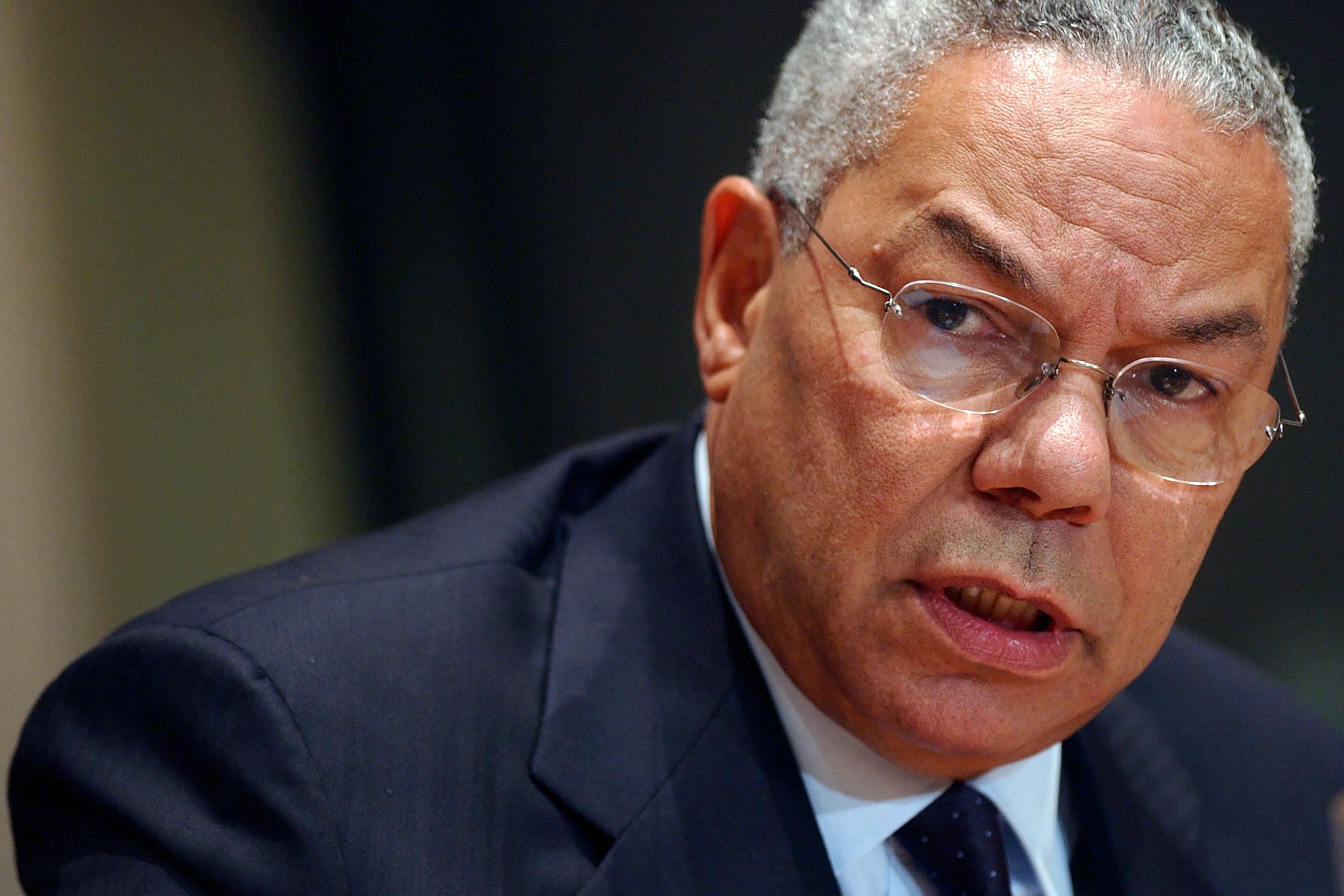 Colin Powell was a paradox: He was a key enabler of perhaps the most tragic example of U.S. foreign policy overreach in recent memory. Yet for most of his career, he struggled mightily — and frequently in vain — against precisely that kind of overreach.

Powell’s career was bookended by two wars in Iraq, a parallel repeatedly highlighted in last week’s obituaries. The 1991 Gulf War was a textbook example of his view that military force should be used sparingly but decisively to safeguard the national interest, while the 2003 Iraq war was the polar opposite: A war fought for murky reasons with no clear end state in mind. But what many obituaries didn’t note is that during the years in between, arguably the apex of Powell’s influence, U.S. foreign policy departed dramatically from — even outright rejected — his restrained theory of American military power.

Powell, who passed away this week, will be forever associated with two things. The first and likely more historically significant is his ill-fated Iraq War advocacy in front of the U.N. Security Council, which paved the way for the invasion and occupation of Iraq, and directed the course of U.S. foreign policy for two decades. For those interested in the future of America’s role in the world, however, the second legacy may be as important: His advocacy, particularly during the 1990s, for a set of principles limiting the use of military force that became known as the Powell Doctrine. 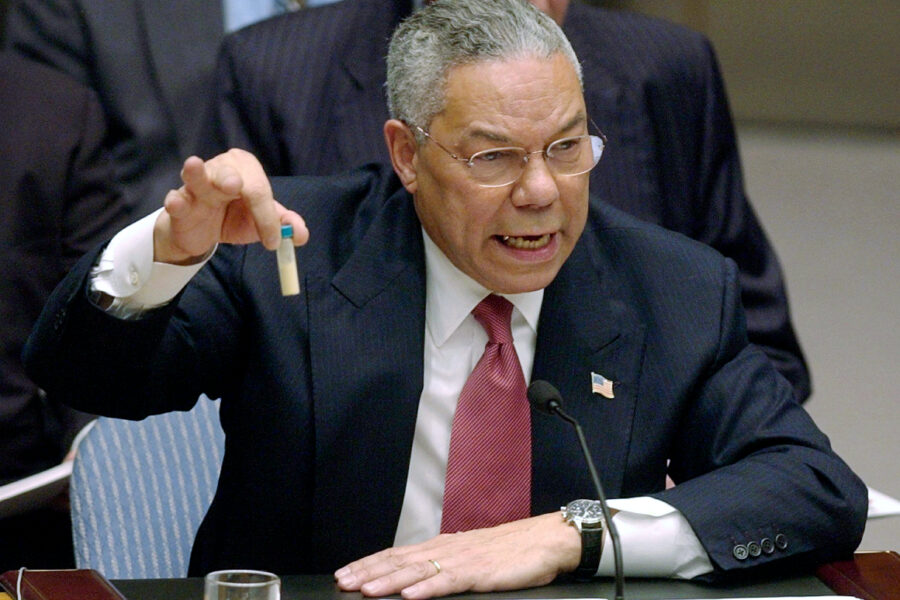 The mismatch between these two legacies is the ultimate irony of Colin Powell’s career. His compelling vision of constrained U.S. military power, forged during the Vietnam War, was out of step with a post-Cold War zeitgeist that saw America as the “indispensable nation.” Powell failed to sell the foreign policy establishment on the idea that the military should be used sparingly and prudently. Worse still, after a decade of resisting the missionary impulse in U.S. foreign policy in the Balkans and elsewhere, he himself would fall victim to the zeitgeist, accepting the need for a foreign policy more assertive than his instincts suggested and acting as a trusted proponent of the Bush administration’s flawed case for war in Iraq. Still, Powell may yet have the last laugh: Today, with 20 years of post-9/11 wars evoking the same feelings of regret that inspired the original doctrine, the arc of American foreign policy seems finally to be bending back in the direction of his prudent guidance.

The Powell Doctrine drew on principles first formulated by Reagan’s Secretary of Defense Caspar Weinberger in the 1980s. In the run-up to the Gulf War, Powell took Weinberger’s principles and ran with them, arguing that war should be rare and limited. He fleshed these ideas out further in a 1992 Foreign Affairs article, in which he said “we must not… send military forces into a crisis with an unclear mission they cannot accomplish.” The doctrine’s emphasis on clear political objectives was largely a legacy of the Vietnam War: Powell, as with many soldiers and policymakers who saw that conflict up close, came to believe the United States had not adequately considered the ramifications of its disastrous involvement in Vietnam.

Thus, the Powell Doctrine argues that the United States shouldn’t enter a conflict unless a vital national security interest is at stake, there is a clear objective, the risks and costs have been assessed and there is a clear exit strategy. At the same time, if the United States does choose war, it shouldn’t pull its punches; Powell contends that any conflict important enough to fight is a conflict important enough for decisive military action, including, if necessary, putting American troops in harm’s way.

It was a good fit for the Gulf War, a fairly clear-cut conflict in which Iraqi dictator Saddam Hussein invaded Kuwait, violating international law, threatening Saudi oil fields and — most importantly — threatening to disrupt global oil markets. It was also a good match for the relatively cautious President George H.W. Bush, who accepted the recommendation of Powell — then chairm of the Joint Chiefs of Staff — that once the U.S. had pushed Saddam’s military out of Kuwait, it should not pursue him to Baghdad and overthrow his regime. Saddam’s invasion represented a clear threat to U.S. national interests and was dealt with through a decisive yet limited military intervention. It was, in short, the Powell Doctrine in action.

America’s unequivocal victory in the Gulf War only buttressed Powell’s opponents, however, leaving him to try to explain why that success was not likely to be replicated in less clear-cut conflicts. Within a few years, the doctrine was regarded as an increasingly poor fit for the freewheeling, expansive U.S. foreign policy that was taking shape. The early 1990s, after all, was the “unipolar moment,” when the collapse of the Soviet Union left the United States as the only superpower and Washington embraced the idea that American power could reshape the world. In one oft-recounted incident, former Secretary of State Madeleine Albright is said to have pushed Powell on his resistance to the use of force for humanitarian purposes in the Balkans, asking, “What’s the point of having this superb military that you’re always talking about if we can’t use it?” Powell was appalled, noting that “American GIs were not toy soldiers to be moved around on some sort of global game board.”

Occasional success in campaigns that still violated the Powell Doctrine similarly bolstered his critics. The 1998 Kosovo intervention was ultimately successful in forcing Slobodan Milosevic to negotiate with the Albanian Kosovars, though it took far longer and was far bloodier than initially predicted. Obvious failures like the tragic Clinton-era intervention in Somalia — which saw more than 20 U.S. soldiers killed in action and clearly didn’t meet the Powell Doctrine’s standards for intervention — were largely minimized in foreign-policy debates.

By the mid-1990s, the charitable view in Washington was that Powell’s guidance was well-intentioned, but impractical and outmoded, suited only for “a best-case scenario” (as former Secretary of the Navy Jim Webb put it), or for a bygone era of clear-cut conflicts like the Gulf War. Some even argued explicitly that the doctrine was self-defeating, with Powell’s insistence on an exit strategy leaving “the fruits of victory to wither on the vine.”

At the end of the day, it was Powell himself who would put the final nail in the coffin. In the aftermath of 9/11, he seemed to have accepted that his ideas no longer fit the moment. As The Economist put it in January 2003, “there is some evidence that he has abandoned, or at least refined, his doctrine… if there is any inconsistency, it can be attributed to the emergence of the threat of WMD in the hands of violently unpredictable dictators or terrorists.” The 9/11 attacks had changed the world, and even Colin Powell appeared to have lost faith in the idea of clean, effective wars laser-focused on the national interest. Two weeks later, Powell went to the U.N. Security Council and argued in favor of war in Iraq.

History has not vindicated him. The wars in Iraq and Afghanistan notably failed to meet the criteria Powell set out in the 1990s. In Iraq — even if one were to accept the faulty intelligence Powell personally sold (and apparently believed) — the United States had at best a moderate national security interest in toppling Saddam. Policymakers failed to adequately plan for an exit strategy or to consider the invasion’s second-order effects on regional security. The Afghanistan war was clearly justified in terms of national security, yet policymakers failed to limit their objectives to the toppling of the Taliban or the killing of Osama bin Laden, leading to a two-decade quagmire of shifting goals. The same could be said for the Obama administration’s 2011 intervention in Libya, which occurred after Powell left public life but offered another example of U.S. policymakers downplaying a military intervention’s risks and potential costs.

Yet just as Vietnam drove Weinberger and Powell to call for limits on the use of U.S. military force, America’s futile efforts to reshape the greater Middle East after 9/11 are now doing something similar. When President Joe Biden announced the end of the U.S. war in Afghanistan, he outlined a number of lessons from two decades of the war on terror: “First, we must set missions with clear, achievable goals — not ones we’ll never reach. And second, we must stay clearly focused on the fundamental national security interest of the United States of America.”

This distinctly Powellian justification was even matched with an endorsement from Powell himself, who told the Washington Post in April that withdrawal from Afghanistan “was overdue… we’ve done all we can do.” In fact, Powell had backed withdrawal as early as 2011, citing the Powell Doctrine and the failure to set clear and achievable objectives in the conflict’s opening stages.

At the peak of Colin Powell’s career, the Powell Doctrine could not persuade policymakers who were determined to use American power to reshape the world. Powell was a man of his time: Deeply shaped by America’s failures in Vietnam, he resolved to prevent future policymakers from making similar mistakes. Yet that determination was not enough to overcome the alluring idea of the all-powerful, indispensable nation that dominated during his time shaping American foreign policy. It wasn’t even enough to persuade him personally to oppose the post-9/11 wars.

Yet it seems that just as Powell himself has passed on, we have come full circle on his ideas. The prudent ideas underlying the Powell Doctrine are making a resurgence. As the Biden’s administration’s interim national security strategic guidance, published in March 2021, put it: “the use of military force should be a last resort, not the first… [and] should only be used when the objectives and mission are clear and achievable.” Today’s policymakers seem intent on learning the lessons of the post-9/11 wars, much as Powell learned the lessons of Vietnam. Powell’s life, however, offers a cautionary tale: If we forget the lessons of Iraq and Afghanistan too quickly — and shift away from these prudent principles — we may end up repeating his mistakes.