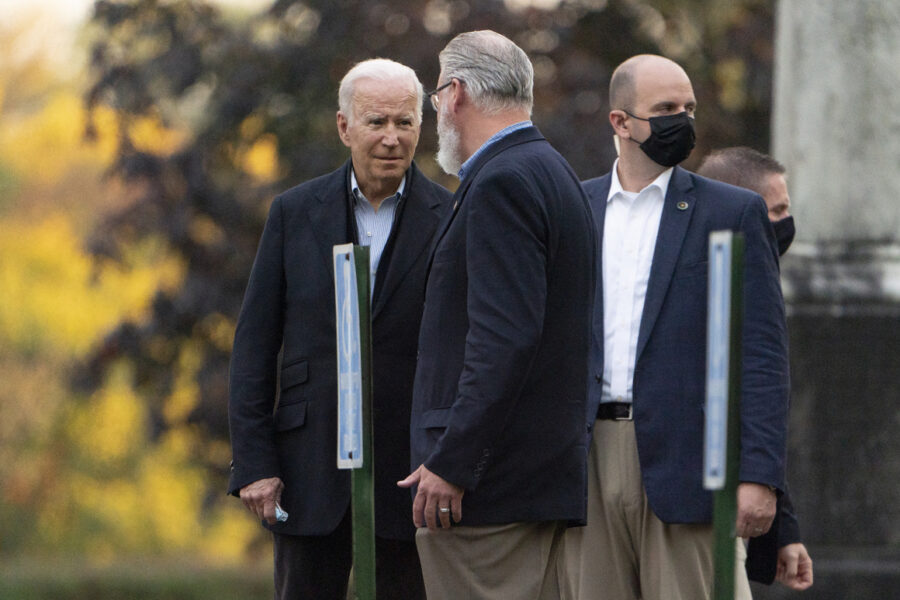 President Joe Biden hosted Sen. Joe Manchin in Delaware on Sunday as the two sought to finalize an agreement on Biden’s domestic agenda, according to multiple people familiar with the meeting.

The president huddled with the West Virginia moderate in Delaware, where Biden is spending the weekend. Senate Majority Leader Chuck Schumer also attended. The meeting comes at an absolutely critical time for Biden, who is seeking to clinch a deal with Manchin and Sen. Kyrsten Sinema (D-Ariz.) on his social spending plan in the next week.

Democrats believe a top line agreement is unlikely to come from Sunday’s meeting given how much work is left, but things are moving fast enough that House leaders now may hold a vote on the Senate’s bipartisan infrastructure deal as soon as Wednesday, according to multiple sources. That legislation has been caught up in the House, held by progressives who want a commitment from Manchin and Sinema on the rest of Biden’s agenda.

While Democrats are hopeful that the president and the two senators can hash things out and strike a framework for the legislation aimed at climate action, child care, health care and education, they are somewhat far apart. Manchin is insisting on his $1.5 trillion number, and the White House and Democratic leaders are aiming to go as high as $2 trillion after initially pursuing a total of $3.5 trillion. Both sides may need to show some flexibility down the stretch, and if Manchin comes up to a higher number, it could save a program or two from being cut entirely from the package.

The slimming of the legislation is threatening to derail two long-held Democratic priorities: paid leave and Medicare expansion for dental, vision and hearing. Neither Biden nor progressives in the Senate have signed off on eliminating those, though that could become necessary to win Manchin’s support and strike a quick deal.

Democrats are also zeroing in an agreement to give relief on state and local taxes, or SALT, to people in high-cost states. The leading option is to delay a cap to those deductions for two years.

When asked Sunday on CNN’s State of the Union about whether paid leave would be included in the final package, House Speaker Nancy Pelosi replied: “That’s our hope, that’s what we’re fighting for.” When it came to Medicare expansion, Pelosi added “that’s part of the negotiation” but noted “dental is very expensive.” Democrats may be able to expand Medicare to cover vision and hearing, however, given their lower costs.

“Dental will take a little longer to implement,” Pelosi said. “We’ve been told by people who know about these things that it’ll take five or six years in order to implement the dental. So how do we, shall we say, fill in the blank there?”

In a town hall last week, Biden publicly discussed Manchin and Sinema’s opposition to the Medicare expansion, as well as Sinema’s resistance to increasing tax rates on corporations and high-income individuals.

“Joe’s not a bad guy. I mean, he’s a friend. And he’s always, at the end of the day, come around and voted for it,” Biden said.

In addition to working around Manchin’s spending concerns and his opposition to a carbon tax and Clean Energy Performance Program, Democrats are also working with Sinema on tax proposals to levy a minimum tax on corporations and target billionaires’ assets.

Pelosi suggested Sunday on CNN that the Senate could outline additional financing proposals as soon as Monday.

“We have other things, we have enforcement, overseas harmonization of taxes, we have an array,” Pelosi said. “On our side, we have been totally ready with alternatives in terms of House and Senate and the White House. We have plenty of alternatives.”

Given that they are still haggling over the price tag, revenues and overall policies for the legislation, it’s almost impossible to envision Democrats passing it this month. But party leaders are hopeful that if they can land an agreement, it will offer enough specificity to progressives to encourage them to pass the $550 billion infrastructure bill before the Highway Trust Fund runs dry at the end of the month — and before Virginia’s gubernatorial election a couple days later.

While Democrats expressed optimism this past week over their negotiations with Manchin, some are still questioning Sinema’s thinking and accusing her of a lack of transparency. She’s stated that she’s delivered detailed proposals to both the White House and Schumer.

“Senator Manchin has been a straight shooter — you know exactly where he stands. I disagree with areas, but I respect that,” Rep. Ro Khanna (D-Calif.) told Chris Wallace on “Fox News Sunday.“ “My concern with Senator Sinema is why are the rules different for her? Why doesn’t she go on shows like yours; why doesn’t she explain herself?”

Sarah Ferris contributed to this report.