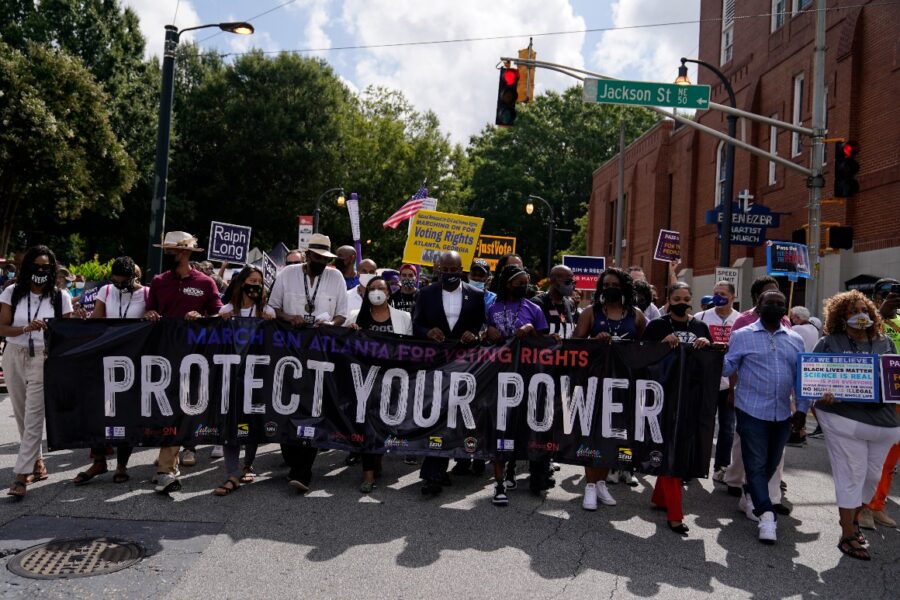 MORROW, Ga. — Sitting outside a cafe here on a warm September day in Clayton County, Alaina Reaves is exhausted, though that may be expected of someone at the frontlines of one of the most pitched political battles in America today.

Her red dress is on inside out, which she says she’s aware of and holds up as a sign of her immense fatigue. She has a black blazer, too, which hides the sartorial snafu. She’s 32 years old, a member of the Democratic National Committee (the youngest currently serving and the first to represent the county) and, over the past few years, part of the coalition responsible for turning Georgia blue. Now, she’s fighting to keep it that way.

What makes it all so draining, though, is that she knows it’s slipping away.

“It is unfair to assume that we can out-organize voter suppression,” said Reaves. “Speaking as an organizer here … sitting at a table full of community organizers, Georgia organizers are tired.” 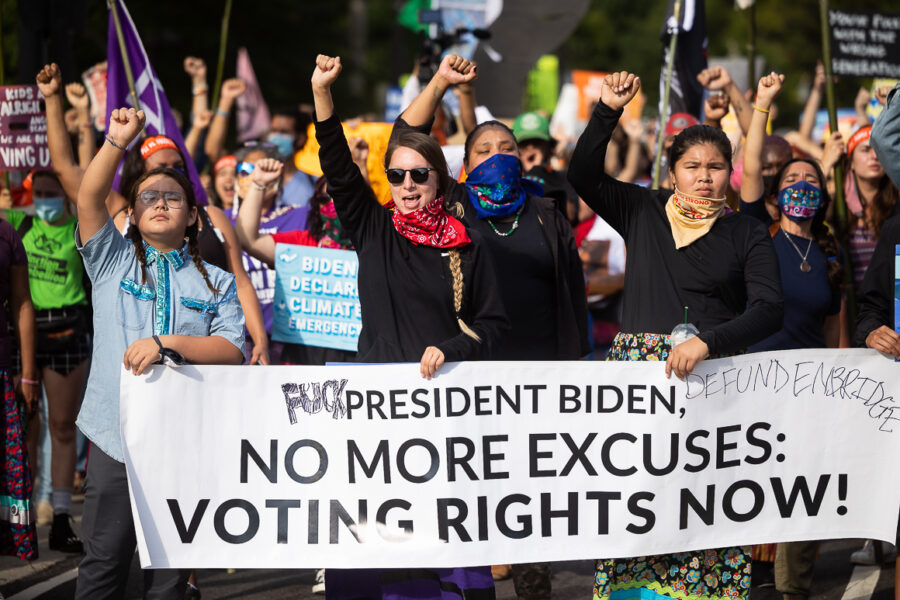 Less than a year after voters in Georgia voted for Joe Biden and then two Senate Democrats in runoff elections, the state finds itself once more at the center of the political universe. A Senate election is coming up next year along with a gubernatorial contest. Beyond that, Georgia has become a test run for whether Republicans, encouraged by former President Donald Trump’s lies about election fraud and attacks on democracy, will use their new restrictive election laws to consolidate power.

Republicans have insisted that the laws are needed to restore confidence in the elections, though the 2020 contests have been documented repeatedly as accurate and secure and the main reason there is doubt about them is because of efforts to sow it by Trump.

President Biden, meanwhile, has described those laws — passed just two months after the U.S. Capitol was attacked in a failed insurrection by Trump supporters — as an “assault” on voting “in ways that I haven’t seen in my entire career.” And yet, there’s been little to no movement in the Democratic-controlled Congress to address it. This past week, Republicans blocked Democrats’ latest attempt to pass a bill through the evenly divided Senate. That has left Reaves and her colleagues virtually on their own.

“We’re gonna need the money,” said Felicia Davis, an organizer for the Clayton County Black Women’s Roundtable, who sat across the table from Reaves. “It won’t take trillions, but it will take more than it took [in 2020].”

Davis and Reaves spend their days re-educating voters on the state’s new voting laws. It’s like a government 101 court for the uninitiated, an education and mobilization effort to keep the wavering engaged and recruit the uninitiated. The work brings them in and around Clayton County to everyday places, like shopping mall parking lots and grocery stores. But, occasionally, it extends outside of Georgia. Davis traveled to Washington, D.C. over the summer to be arrested alongside fellow activists on Capitol Hill for protesting in Senate office buildings.

The work took on a new meaning in March, when Republicans in the Georgia state house passed S.B. 202, which limits access to the ballot in various ways, including reducing the number of ballot drop boxes across the state compared to 2020. The law effectively eliminated mobile voting unless an emergency was declared, and shrunk the window of time allowed for voters to submit absentee ballot requests. But the more dangerous element of the bill, according to election law experts, is the provision that effectively allows for the take-over of county election boards.

If a review of an election board’s performance — which can be triggered by a request from two state House and Senate members or less, depending on the size of the county — finds evidence of errors or a violation of election law, the board can be disbanded.

Already, the provision is being tested in the county next door to Clayton.

Despite finding no evidence of fraud by a state auditor last year, Georgia’s state election board appointed a panel to review the election board in Fulton County, a Democratic stronghold and the most populous in the state. The announcement set off a veritable fire alarm among voting rights activists and Democratic operatives on the ground, who saw it as the first step toward a possible GOP takeover of the election system. And then…. nothing.

More than two months since then, the Fulton election officials say they have no insight into the process or the criteria on which the appointed panel is judging them. Robb Pitts, chair of the Fulton County Board of Commissions, said in late September that he had not been contacted by anyone from the state of Georgia regarding the review and didn’t know what the procedure would be for it.

“Former President Trump has been talking about Fulton County,” said Pitts from his office in downtown Atlanta. “There’s a target on our back…It’s us today, it can be any other county tomorrow.”

Aaron Johnson, a member of the Fulton County Election Board, said he still doesn’t know if a timeline exists for the review panel. “What are they looking for? What’s the criteria? What’s the ramifications?” he asked. “We don’t have a real clear guide because quite frankly, the law doesn’t give you one.”

For Georgia Democrats, the fear about the new voter laws in their state is not just about the restrictions Republicans have put in place, but the guardrails they’ve ripped out. The ability to trigger performance reviews has created an atmosphere where election officials in Democratic-leaning counties are constantly in fear of losing their jobs, said Johnson. He said he has received death threats — an increasingly common and exceedingly dark phenomenon across the country.

“Most counties should be afraid, because what begins to happen is that people can’t operate without thinking about what’s going to happen to them,” he said.

The problem, he added, was not just the possibility of an election being overturned erroneously. It was that “the fear of a stolen election” would create “an atmosphere that makes people potentially not want to go vote.”

Under these circumstances, keeping voters engaged has been a heavy task. Deeply aware of the South’s history, many who spoke to POLITICO said they worried that some of the horrors from that era are creeping up once more and that the voting rights wars could become violent, as exemplified by the Capitol riots on Jan. 6.

“It’s an undercurrent, a vibration, that anything could happen in this country at this time,” said Shadé Yvonne Jones, a community organizer in the Clayton and Fulton Counties.

Many Democratic activists here fear a “stolen” election in 2022 and 2024. But they are hesitant to say it out loud, wary of the psychological impact it could have on voters. They also fear that the new voting laws in Georgia, left unsuccessfully challenged, will erode the country’s democratic foundations. Already, Republicans who have questioned the validity of Biden’s win are running for local seats in Georgia and a number of election officials who certified the 2020 results have been removed from their positions in parts of the state.

The simplest way to counteract all this, those on the frontlines say, would be intervention from Congress. But while Democrats have proposed bills in Washington that would expand voting access, restore key pieces of the Voting Rights Act regarding discriminatory changes to election law, and shield election officials against intimidation and threats, nothing has passed.

And, it seems, nothing likely will.

This past week, Republicans again filibustered a Democratic bill to protect voting access and expand the Justice Department’s ability to sue if election record requirements are violated. There appear to be nowhere near 10 Republicans interested in passing such a measure, nor one that would restore key sections of the 1965 Voting Rights Act. Barring a change to Senate filibuster rules, the bills may never pass.

Pat Pullar, a member of the Clayton County board of elections, said the absence of action on the federal level has made it so that Georgia is effectively “back in the 1950s” when Black people “didn’t have the right” to vote. She insists that voting rights advocates aren’t waiting on Washington, that they’re “still going to do what we’ve been doing for all the years that we’ve been doing it.” That includes “educating, mobilizing and registering people to vote.”

But that ground work may not be sufficient to beat back these new laws.

“It’s all scary,” said Deborah Scott, executive director of the social justice non-profit Georgia Stand UP. She sat in a conference room adorned with newspaper clippings detailing the struggles of the civil rights movement. “The thing that gives me motivation to do this work is — even if you look at this room — and all the things that have happened to our communities collectively over the years we still won in the end.”

In recent days, the White House has offered those Georgia Democrats a glimmer of new hope. In a town hall on Thursday, Biden said he was open to discussion of filibuster reform in the future, including for legislation pertaining to voting laws. His press secretary, Jen Psaki, added that Democrats “are going to have to determine an alternative path forward” if Republicans “cannot come forward and stop standing in the way.”

Still, the party would need all 50 senators to embrace such a change — a longshot, as at least two Democratic centrists have repeatedly vowed to block major rules reform. The window to act is closing, Georgia Democrats warn. They’re wondering how closely D.C. is listening.

“Is it too late?” asked Chris Bruce, ACLU’s political director for the state of Georgia. “The only time it’s too late is after the election’s over.”