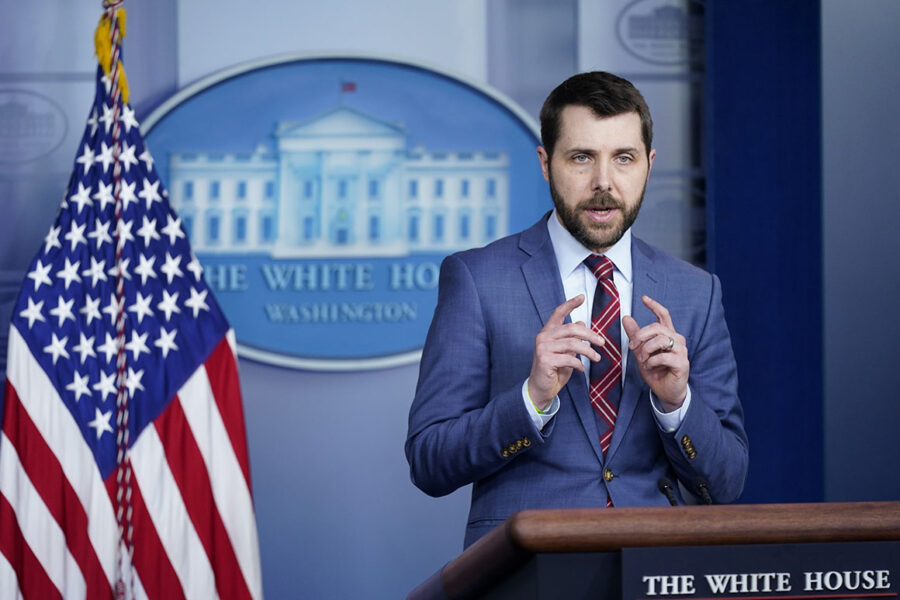 White House officials publicly and privately on Tuesday said they were confident President Joe Biden could still land a deal on his social spending bill even if it didn’t come before he departs for Europe on Thursday.

But some Democrats involved in conversations with the White House were less optimistic, openly fretting that talks risk losing momentum and stalling out if they aren’t done by the time Biden gets on that plane.

“They’re in hand-to-hand combat. The ammos all gone, they’ve switched to bayonets. They’re just trying to get it done,” said John Podesta, founder of the progressive think tank Center for American Progress and a leading climate activist, who recently joined a meeting with senior White House officials.

“They would like to get this done before they leave,” Podesta added. “It’s hard to do what he’s doing from Europe. It’s not like the phones don’t work, but you can’t look somebody in the eye across the table and … then try to get to ‘yes.’ It’s just much harder to do that when you’re far away.”

Biden is set to leave for back-to-back summits Thursday — first a G-20 meeting in Rome and then a climate change conference in Glasgow — just as Democrats are rushing to reach a framework on the president’s social spending bill that aims to boost child care, expand health care coverage and combat climate change. The administration would prefer an agreement inked prior to Biden’s departure, but multiple key components remain unresolved.

“We should hurry,” said Sen. Brian Schatz (D-Hawaii). “The President’s foreign trip is an action-forcing mechanism for every Democrat and every patriot who wants the president to go on this important international trip with the strongest hand possible.”

“We’re not done, but we’re very close … closer than we’ve ever been,” he added.

The White House on Tuesday argued that they are working non-stop to reach a deal and that the president is holding multiple strategy sessions a day — often more than six — with staff and Cabinet members, in addition to meeting regularly with lawmakers. Press secretary Jen Psaki and national security adviser Jake Sullivan both said the work would continue, if need be, should Biden go abroad. One White House official quipped that “there is internet in Europe.”

But in meetings with lawmakers and advocacy groups, White House officials conveyed a sense of increasing urgency at odds with the public confidence. A source who recently met with White House officials said there is a general sense of optimism in the administration but that negotiations are “incredibly fragile and a lot of the fragility is not in the climate space.”

In a meeting with climate and environmental justice groups on Monday, National Economic Council Director Brian Deese “did scare some folks in the room” with his candid assessment of the negotiations, the source said. “Because I think a lot of us assume it’s a done deal. And we’re not home yet.”

Podesta likewise expressed optimism about Biden’s ability to bring the Democratic factions together, but added that “until it’s done, it’s not done. And there’s some chance that it never [gets done], that they literally can’t close.”

White House officials have stressed that an agreed-upon package would be the realization of many long-sought progressive goals. Despite negotiating a deal well below the proposed $3.5 trillion starting line, administration officials are touting the generational nature of its contents. By Tuesday evening, some topline numbers for key provisions in the package began to take a more concrete form. The White House told lawmakers the climate change provisions in the package are expected to cost between $500 to $555 billion — a sizable chunk of the overall legislation and an historic investment in combating global warming.

“Do they want to be a part of the largest investment in early childhood education in history? Do they want to make health care more affordable and accessible?” Psaki said on Tuesday. “Or do they want to let the perfect be the enemy of the historic?… That’s what we’re talking about right now in these negotiations.”

White House officials in meetings this week were adamant that they needed to arrive at a framework by this week, the latest in a long string of self-imposed deadlines. Some people in the talks, however, said they took it as a sign of the administration’s lack of control over what’s primarily been a lawmaker-driven process when officials began downplaying the necessity to finish before Biden departed.

The stakes are high for Biden, who has bet a large portion of his first year in office on enacting a sweeping bipartisan physical infrastructure bill and the party-line social spending plan.

“I think it would be very unwise and unfortunate if we did not have a sort of framework agreement by which [Biden] could be judged,” said Sen. Martin Heinrich (D-N.M.), referring to the desire for an agreement before the president leaves for his overseas trip.