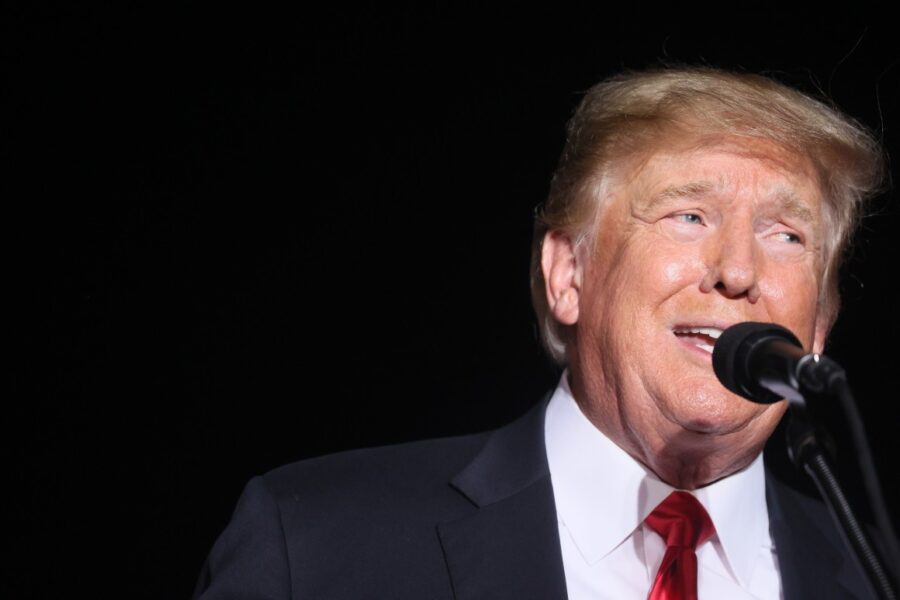 Donald Trump’s proclamation that he’d “soon” visit Virginia as the state’s gubernatorial race comes to a close was so unexpected that few outside his inner orbit knew it was coming and the Republican candidate’s own campaign was left searching for details.

Aides to Glenn Youngkin, who is in the last week of a tight race against Democrat Terry McAuliffe, said they were caught off guard by the former president’s Wednesday afternoon statement. Trump confidants, meanwhile, were initially coy about whether he was being serious, with staff noting his penchant for mischief-making and trolling by tweet.

Within a few hours, there was some clarity. Trump wasn’t actually planning to stop in the commonwealth, at least not imminently, according to aides.

Still, the scramble that the prospect of a Trump visit set off underscored just how much of a wild card he remains on the political scene, and how complicated it can be for Republicans in competitive states to handle him.

For months, McAuliffe has pleaded with Trump to join Youngkin on the campaign trail, knowing the appearance of the former president on behalf of Youngkin could serve as rocket fuel for driving Democrats to the polls in a state President Joe Biden won by 10 percentage points. Meanwhile, Youngkin has tried to emphasize the idea that he’s taking the opposite approach, publicly campaigning alone and without national Republicans by his side.

A late appearance by Trump in Virginia would be a gift to McAuliffe, a disruption for Youngkin and a final test of how both campaigns have tried to navigate Trump and his polarizing powers. That would have been especially true if Trump had gone to Arlington — which his statement said would be the site of his stop — a place where he won the same percentage of the vote in 2020 as liberal Portland, Ore.

In the end, however, a swing through Virginia won’t come before the votes are cast. And critics of Trump said they suspected he wasn’t visiting precisely so that he could take credit after the fact for a Youngkin win or play Monday morning quarterback should Youngkin lose.

“He wants to have the ability to call himself the winner no matter what happens, so staying away preserves all his options in the aftermath,” said Tucker Martin, a former Republican consultant in Virginia.

“I think it’s obviously a concerted strategy to make this as much about Virginia as you can, and it’s a smart strategy,” Martin added. “Bringing in Trump would not help them one bit because a Democratic base that is unenthused and not that motivated, the one thing that could motivate them would be Donald Trump rolling up into Fairfax or southwest Virginia.”

Youngkin is in the middle of a final bus tour across the state and has stressed he will not be including star-studded surrogates on his stops. While he’s held private fundraisers with marquee GOP names like Nikki Haley, Mike Pence, Mike Pompeo, Sen. Tom Cotton (R-Ark.), Sen. Tim Scott (R-S.C.) and Chris Christie, none have officially joined him on the trail. Kellyanne Conway, an adviser to Trump, pushed back on the notion that Youngkin has kept the former president away.

“Virginians have shown an appetite for a political outsider, first-time candidate and successful businessman,” Conway said. “Youngkin is fighting for Virginians while McAuliff is just fighting.” 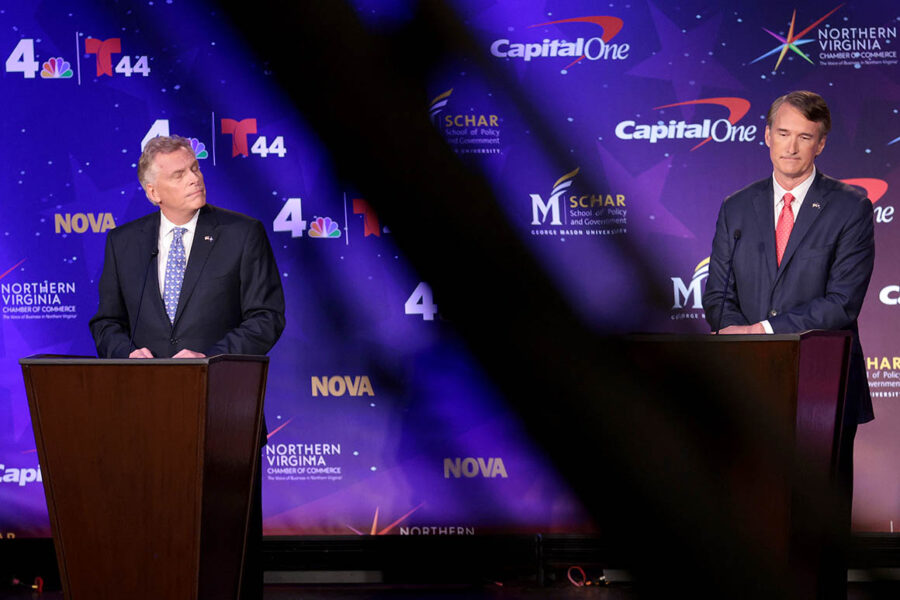 But multiple people familiar with the dynamic said that while Trump hasn’t been told not to come, he hasn’t been invited to appear with Youngkin, either.

“Our campaign message embodies a personality-driven, local-issues-driven campaign, and we’re doing the same thing from a surrogate standpoint,” a Youngkin aide told POLITICO. “Glenn is at the top of the ticket and the race is between Youngkin and McAuliffe, despite what McAuliffe wants to make it about. Same from the surrogate standpoint.”

Top Democrats in recent weeks have privately conceded that their failed efforts to lure Trump for an in-person event could cost them support in Tuesday’s contest. McAuliffe allies and party officials acknowledged feeling worried that Youngkin might be getting the best of both worlds with Trump’s personal absence — benefiting with Republican voters for having what appears to be close associations with Trump (as emphasized by Democrats) while never appearing beside him in a way that could do political harm.

But for McAuliffe’s campaign and close allies, the statement from Trump teasing a possible upcoming visit was an 11th hour invitation to try to yank him back into the picture, coming just one day after Biden needled Youngkin for being “embarrassed” of Trump. The McAuliffe campaign immediately emailed reporters, stating definitively that “Donald Trump is coming to Virginia to campaign for his handpicked guy Glenn Youngkin.”

And McAuliffe aides told POLITICO the campaign raised $500,000 on Wednesday, considerably more than it has on an average day down the final stretch of the race.

“As of now, Donald Trump and his spokesman say he’s coming,” said Josh Schwerin, a Democratic strategist who has worked as a McAuliffe adviser, referring to Trump’s statements. “The fact that it’s even under consideration shows how much Youngkin relies on Trump’s support in his campaign, and every voter in the state should be aware of that.”

Schwerin suggested that Trump’s decision to tease an upcoming trip — whether because he took Democrats’ bait, is trying to exert his primacy over the Republican Party or is merely blowing smoke — forces Youngkin to reconcile with his lack of real independence as a candidate.

“If Trump comes to campaign for Glenn Youngkin, will Glenn Youngkin attend?” Schwerin asked, noting that Trump “doesn’t need his permission to come.” 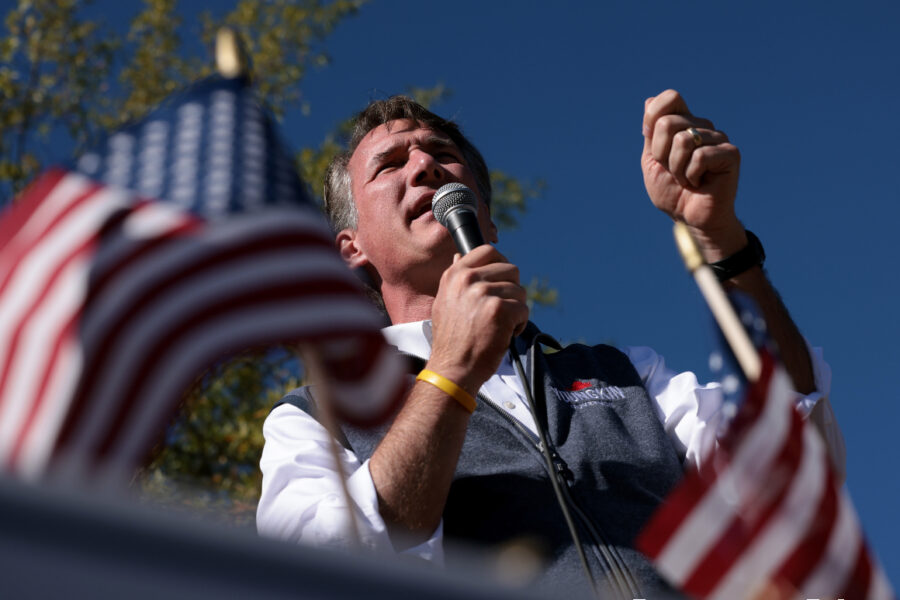 McAuliffe aides, meanwhile, argued that while Youngkin hasn’t rallied in person with Trump, the former president’s pledge to visit Arlington gives them a fresh opportunity to make the case that Youngkin has embraced the MAGA playbook. They pointed to the Republican candidate’s repeated endorsements from Trump; his acknowledgement that Biden was duly elected, while also identifying “election integrity” as a top issue in the primary; and his personal support of vaccines, while also taking aim at Biden for instituting mandates.

In the final week, Youngkin has tried to juice his base by releasing an ad that featured a mother who had tried to have Toni Morrison’s Pulitzer-winning novel “Beloved” banned in public schools because it traumatized her son.

“Maybe Donald Trump will show up and read a copy of ‘Beloved,’” a McAuliffe aide ribbed.