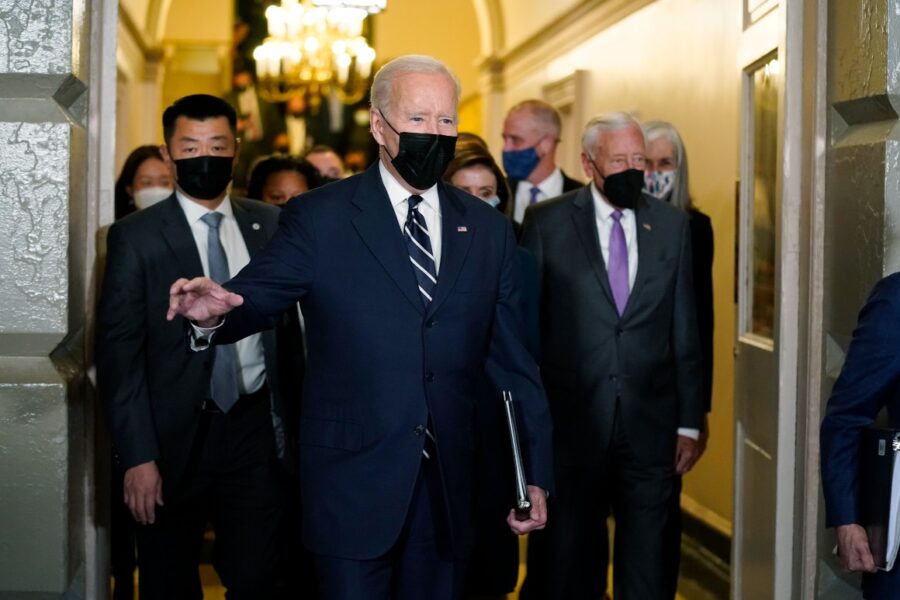 As Biden prepared for the high-stakes meeting with House Democrats on Thursday, Jayapal made an urgent plea on a call with White House chief of staff Ron Klain: Don’t send the president to pressure liberals to vote Thursday on the Senate’s infrastructure bill without a more progressive social spending bill that’s fully done.

Klain pushed Jayapal, who leads the Congressional Progressive Caucus, to vote for the infrastructure bill during the call, according to a source familiar with their conversation. Jayapal responded that she wanted to avoid sending Biden off to Europe on Thursday with a failed vote, according to multiple Democrats.

What happened next is a dizzying fall of dominos. Biden didn’t directly ask House Democrats to pass his bipartisan infrastructure bill, leaving Pelosi to make the request. Then Jayapal’s progressives dug in against the infrastructure vote that the speaker wanted to tee up — using the president’s lack of a request for cover.

By dinnertime on Thursday, House Democratic leadership’s plans to pass the infrastructure bill had imploded for the second time in a month, an embarrassing defeat as the president was en route to Rome. After the House headed home, Pelosi huddled with her two deputies, Majority Leader Steny Hoyer and Majority Whip Jim Clyburn.

The top three Democrats knew they were within striking distance of passing the bill that morning and were left dumbfounded by the lack of a direct ask from Biden. They all agreed that’s why they couldn’t get the votes.

“It all boils down to the fact that there wasn’t an ask,” Hoyer said, according to a source familiar with the meeting.

The call between the top House progressive and Biden’s chief of staff illustrates Democratic leaders’ struggle to get on the same page about how to wield their complete control over Congress and the White House — not to mention the limits of that control. In the end, Democrats — and Biden himself — were left empty-handed, escalating tensions across the party and leaving a crack in the trust between the legislative and executive branches at a critical time.

During Biden’s visit to the Hill, after the Klain-Jayapal call, the president blindsided Democratic leaders by not directly asking the caucus to pass the Senate-passed infrastructure bill Thursday, according to multiple Democrats familiar with the strategy. Pelosi even stood up before her members to clarify the point, directly pushing for the long-anticipated infrastructure vote to deliver Biden an important legislative win before he departed for Europe.

“The president has asked for our vote today,” Pelosi told the caucus, according to a source familiar with the remarks. “In order for us to have success, we must succeed today.”

A Democratic source in the room for Biden’s visit noted that he touted the infrastructure bill and deliberately highlighted its components that would be the most appealing to progressives. Chief among those are the bill’s climate resiliency provisions and help with lead pipelines nationwide that continue to expose children to toxins in water.

But the damage to an infrastructure bill Biden publicly blessed four months ago had been done. Although Pelosi and her leadership team toiled for several more hours to round up votes — mobilizing their whipping apparatus and pressing the White House to clarify Biden wanted Democrats to vote yes that day — emboldened liberals didn’t budge.

As the day wore on, senior Democrats only grew more furious with the White House’s silence. While taking Air Force One to Rome, Biden made only one call House Democrats were briefed on — to Rep. Madeleine Dean (D-Pa.), to tell her he appreciated her CNN appearance talking positively about their agenda. Biden then reiterated that he wasn’t explicitly pushing for the House to pass the infrastructure vote immediately, according to multiple Democrats familiar with that conversation.

“We do not comment on private conversations with lawmakers, but the President is fighting every day to pass the bipartisan infrastructure deal and the Build Back Better Act into law as soon as possible because they will change the lives of millions by ensuring our economy delivers for the middle class,” White House spokesperson Andrew Bates said in a statement. Bates touted the multiple benefits of the social spending framework, including on climate and child care.

Immediately after the meeting with Biden, Jayapal huddled with her progressive caucus, where she told them she had urged the White House earlier not to push progressives to vote on infrastructure alone, according to people in the room.

“The president made a really compelling speech for both bills. He said he wants both bills to pass,” Jayapal told reporters after Biden’s meeting on Thursday. “He did not ask for a vote on [infrastructure] today. The speaker did, but he did not.” 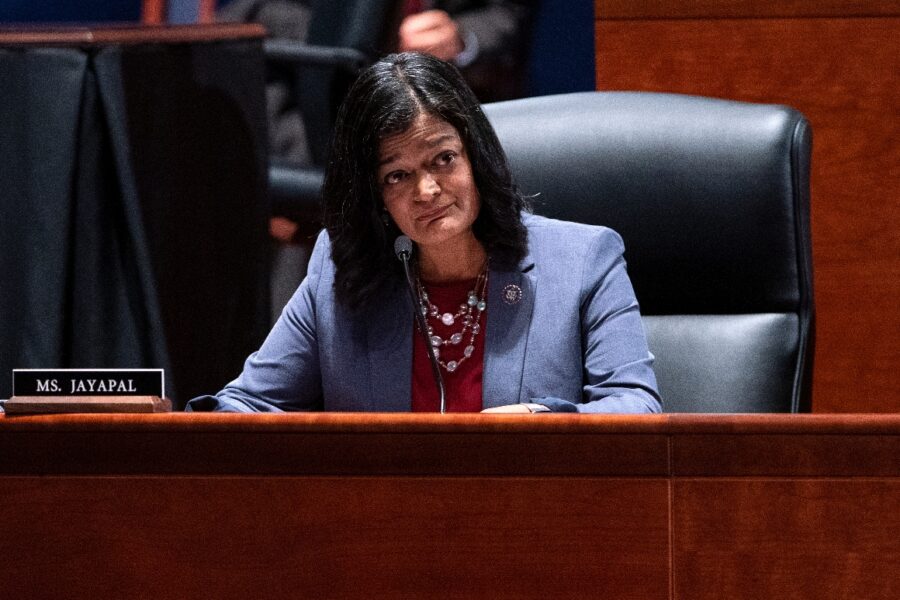 Biden’s hesitancy to demand a vote Thursday was one of several glaring issues that senior Democrats had with the White House’s strategy during the chaotic nine hours before Pelosi and her leadership team yanked the infrastructure bill for the second time in a month.

As Biden attempted to sell his incomplete social spending framework to the public, delivering a speech shortly after visiting with House Democrats, he and his team did not try to clear up whether or not they wanted an infrastructure vote on Thursday.

And in a repeat of September’s struggles, the White House again did not mount an aggressive lobbying effort to get progressives to provide the votes for the infrastructure package. Despite multiple Cabinet members making calls or virtually meeting with members, none appeared to clearly push for an infrastructure vote on Thursday. Instead Biden’s Cabinet warned Democrats against trying to cram too much into the separate social spending package.

Multiple Democrats even directly pressed top White House officials about whether they wanted a vote on the infrastructure bill Thursday during briefings on the social spending framework but never received a direct answer, according to multiple sources familiar with the meetings.

The fraught dynamics between the White House and House Democrats in particular have become more pronounced in the past month. Some Democrats say that’s in part due to Klain’s friendly relationship with progressives, which has given the party’s liberal wing a powerful White House ally — unlike in prior Democratic administrations.

Klain, multiple sources say, primarily talks to progressive lawmakers and is rarely if ever the person House leadership or centrist Democrats turn to in the White House.

His coziness with the left has frustrated leaders and moderate Democrats who view it, at times, as an impediment to getting Biden’s agenda passed, though it has won him praise from progressives who believe passing as many of their priorities as possible would be a boon to Democrats. A source familiar added that Klain talks to House leaders, moderate senators and in recent weeks to centrist Rep. Josh Gottheimer, who has advocated for the House to quickly vote on infrastructure. The White House maintains that Klain, like other key figures of Biden’s team, is frequently in communication with Capitol Hill.

House Democratic leaders plan to make another go at Biden’s agenda next week, though any vote would almost certainly come after their party’s pivotal gubernatorial race in Virginia on Tuesday.

Pelosi and her leadership team have instructed House committee chairs to formalize their revisions to the initial 1,684-page draft of Biden’s bill by Sunday night. After a five-hour hearing on the social spending bill on Thursday, Democrats on the House Rules Committee plan to reconvene as soon as Monday to continue teeing up its roughly $1.75 trillion investment in climate action and the safety net.

“I completely understand the desire to get everything wrapped up in advance of these really significant meetings and conversations,” said Rep. Veronica Escobar (D-Texas), one of roughly three dozen progressives who refused to back the $550 billion infrastructure bill on the floor this week.

“But the challenge is ensuring that we are going to be able to get both bills.”