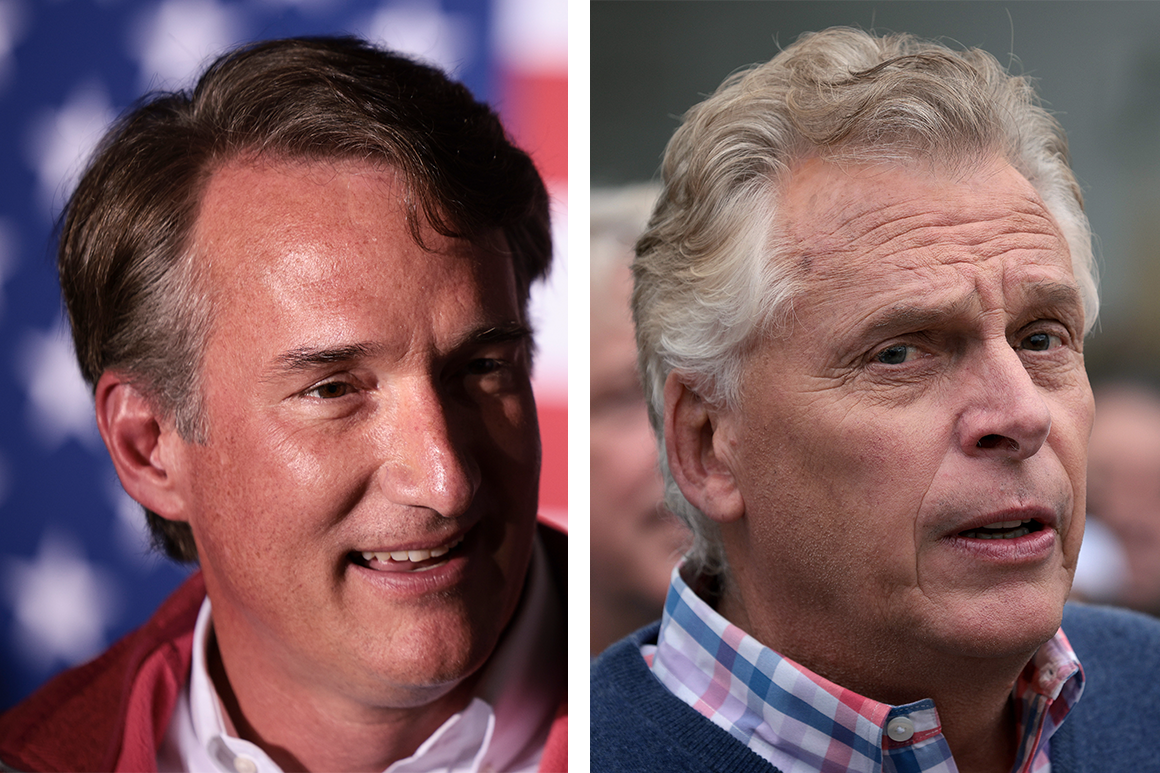 WEST SPRINGFIELD, Va. — The two men seeking to become Virginia’s next governor spent the final weekend before Tuesday’s election imploring supporters to send a message beyond the borders of this one-time swing state.

“This is a moment for us,” Glenn Youngkin, the Republican nominee, told a crowd here Saturday evening. “We are going to send a shockwave across this country. And there’s not going to be a Democrat in any state, anywhere in this nation, who’s going to think his or her seat is safe.”

Youngkin’s Democratic opponent, former Gov. Terry McAuliffe, is trying to lead voters to a different, but equally national message: continuing Virginia’s rejection of the GOP led by former President Donald Trump, who lost the state by 10 points a year ago.

“Trump wants to win here so he can announce for president for 2024,” McAuliffe said at a canvassing kickoff on Sunday in Manassas. “That’s the stakes of this election. He wants to get himself off the mat.” At the same event, Rep. Jennifer Wexton (D-Va.) — who flipped a House seat in the 2018 wave — said Republicans were “beta testing” messages in Virginia for the 2022 midterms.

Virginia’s off-year gubernatorial race has long been considered a political barometer ahead of the midterms. Polls in the closing days of the race show the two candidates deadlocked. McAuliffe is trying to buck history: For decades, the gubernatorial candidate whose party won the White House the preceding year has lost in Virginia, with the only exception being McAuliffe’s own narrow victory in 2013.

But Virginia is a significantly bluer state now than it was eight years ago, which has shaped how both candidates campaign. Democrats have relentlessly sought to nationalize the race, from almost the moment that McAuliffe won the nomination in June. They’re tying Youngkin to Trump, who has endorsed the GOP nominee, both on the stump and in TV advertising, hoping to reenergize Democratic voters who have consistently polled as less enthusiastic this year than Republicans.

McAuliffe has called in Democrats from across the country to campaign for him. That includes the heaviest of hitters: President Joe Biden, Vice President Kamala Harris and former President Barack Obama all stumped for him over the last 10 days. But he also cast a larger net that included everyone from Georgia Democrat Stacey Abrams to Energy Secretary Jennifer Granholm, a former Michigan governor, and Sen. Alex Padilla (D-Calif.). 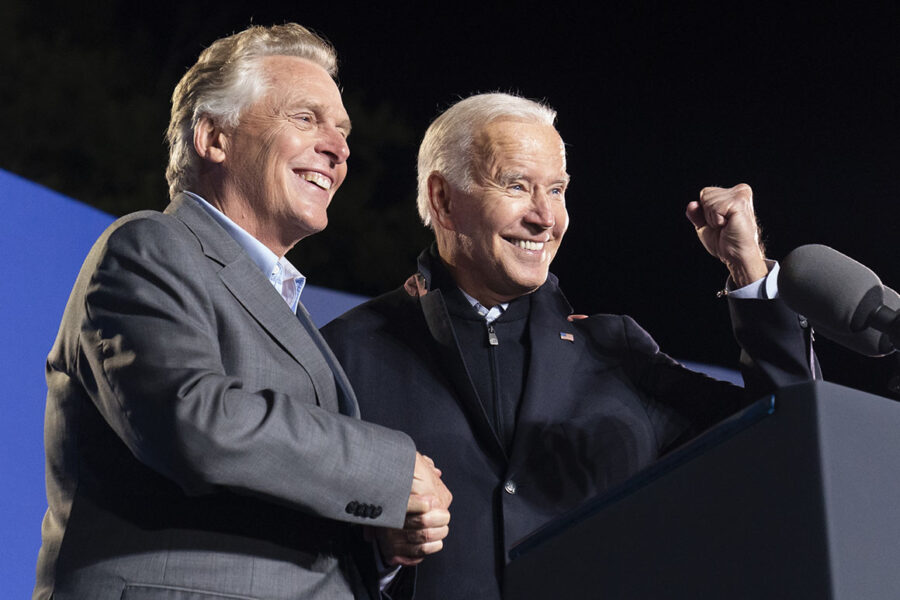 Beyond Trump, Virginia Democrats are also quick to point to Republican-controlled states as what could await the commonwealth, hoping they serve as a warning sign for Democrats.

“Texas, for sure,” said state Sen. Jennifer McClellan, a Democrat whom McAuliffe defeated in the gubernatorial primary, in a brief interview at an event in Richmond, citing the state’s near-total abortion ban and restrictive voting laws. McClellan said that voting rights, in particular, was a motivator for Black voters and that the state’s expanded voting “is on the ballot.”

Youngkin has generated momentum in recent weeks, and his allies say the Trump attacks aren’t sticking. “I think really Republicans are looking at Glenn, and Democrats are looking at Terry,” Rich Anderson, the state GOP chair, told POLITICO at a campaign stop at a Fredericksburg festival this weekend. “And I think that either president — the current or the former — only has a marginal impact on the final outcome, I really do.”

Youngkin has largely eschewed national surrogates. During his final bus tour, his campaign touts that he did not need to bring in big names to draw crowds.

This, most notably, includes Trump. Democrats have been hoping to bait him into visiting the state. Trump is expected to host a tele-rally on Monday evening, and Youngkin told reporters on Saturday that he didn’t plan on participating.

“I haven’t been involved in that,” he said. “But the teams are talking, I’m sure.”

Saturday marked the end of early in-person voting in Virginia, where over 1.1 million people voted early this year, according to data from the nonpartisan Virginia Public Access Project. Those early votes are expected to tilt Democratic — but this is the first gubernatorial election under which both early in-person and mail voting are available to every Virginia voter, and it’s not clear whether Democrats’ turnout operation will be enough to overcome GOP enthusiasm.

In the closing days of the race, the campaign has revolved around cultural fights, primarily on education. Youngkin’s campaign has focused extensively on schooling, casting himself as a bulwark against “critical race theory” — a legal theory that has become a catch-all for conservatives for how race is taught in school — and railing against officials mishandling a pair of alleged sexual assaults by a male student in Loudoun County.

Some conservatives have used those assaults to attack accommodations for transgender students, which are likely disconnected from the allegations and put in place months after the first alleged assault. An attorney for the suspect also said it was inaccurate to describe his client as “gender-fluid” or transgender. Youngkin himself did not raise those connections during a speech he gave railing against school officials for their handling of the allegations. A juvenile court recently found the student accused of assault guilty in one case, with a second case ongoing.

Every Youngkin event features “Parents for Youngkin” signs, and they’re also seen lining the roads. Promising to invest in accelerated math programs and advanced diplomas was a reliable applause line for Youngkin, only overshadowed by the cheers for his pledge to ban critical race theory in schools, which has become a rallying cry for Republicans nationally. 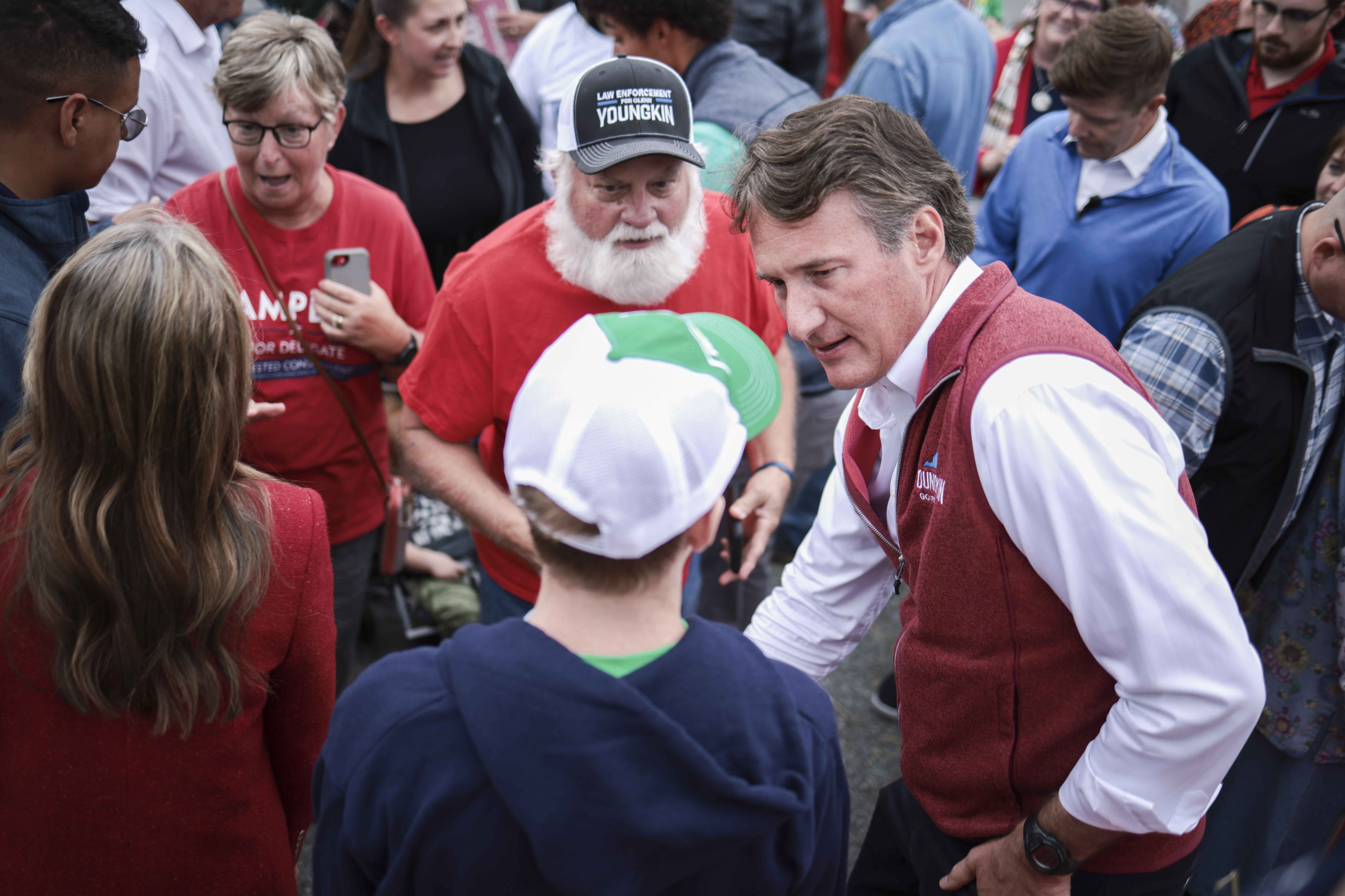 “Apart from the emergence of the Tea Party in 2009 … the Virginia’s governor’s races in 2013 and 2017 [had] not really had a singular focus the way this race had,” said Noah Wall, who was a top staffer for Republican Ken Cuccinelli’s unsuccessful gubernatorial bid eight years ago and is now an executive vice president at FreedomWorks. “We didn’t have any idea the way that it would come down and focus [the race].”

Democrats, meanwhile, have seized on one of Youngkin’s last ads. The ad features a mother who pushed for a bill that would have notified parents if “explicit content” was assigned and given them the opportunity to opt students out, which McAuliffe vetoed. The reading assignment that inspired that parent’s push? The Pulitzer-winning “Beloved” by Toni Morrison, assigned to her then-senior-year son in an AP English class. McAuliffe is running ads saying Youngkin “wants to ban books by prominent Black authors.”

Liberals have also been scrambling in the state to juice turnout for McAuliffe and the rest of the ticket, with the Democratic Party also trying to hang on to a slim majority in the state legislature’s lower chamber. Democrats’ main challenge: getting their voters to show up on Tuesday, even if they’re less excited about politics now that Trump is out of the White House and Biden is struggling to enact his agenda and grapple with a series of crises.

“This is a turnout election,” said D. Taylor, the international president of the labor union UNITE HERE, who is helping coordinate local chapters’ canvassing efforts. “I mean bluntly, I think if you look at where Virginia is at, people like McAuliffe should win. But it’s all about turnout.”

Republicans, meanwhile, are looking to begin their comeback after only one year in the D.C. wilderness.

“The nation’s eyes are on Virginia,” Youngkin said Saturday in Manassas Park. “As Virginia goes, so goes the nation.”

Steven Shepard contributed to this report.