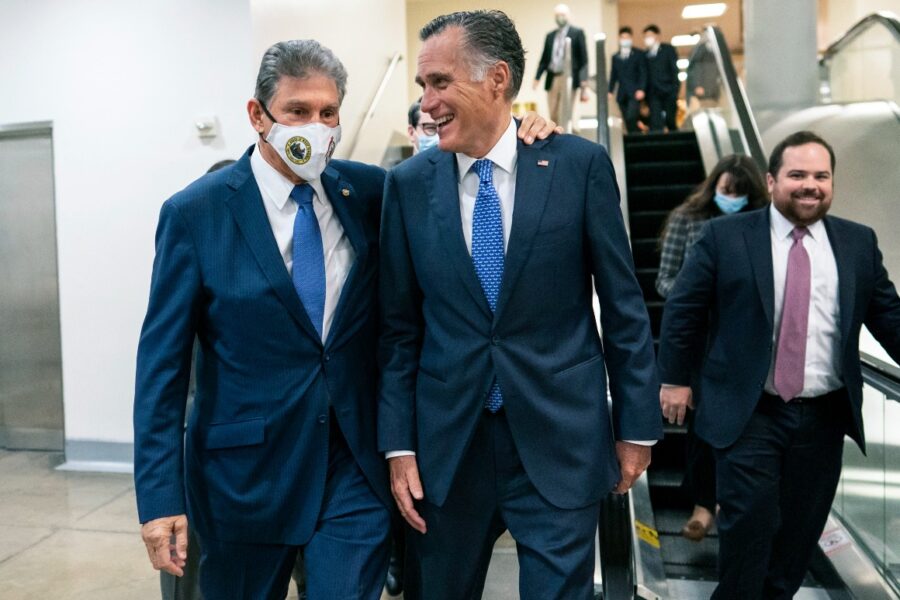 House Democrats are fighting to coalesce around their party’s $1.75 trillion social spending plan — all for Sen. Joe Manchin to change it anyway.

As Speaker Nancy Pelosi furiously worked to unite her caucus around a centerpiece of the party’s domestic agenda, Manchin is making it clear that he’s not paying much attention to what the House is crafting, memorably saying Wednesday that he has “no idea” what they are doing.

So even as the House tries to include provisions like paid leave and immigration reform, the West Virginia Democrat is operating on the presumption that the House can do what it wants, and then he will too. Manchin opposes including paid leave in the bill, and the Senate’s nonpartisan rules referee may scrap immigration reform before he has a chance to raise a concern.

But Manchin and the parliamentarian are not the only ones who might want a say in the final product, which could result in protracted negotiations with the House.

“I wouldn’t be surprised at all if, between the parliamentarian and Joe’s concerns … whatever the House sends will have to be modified at least a little,” said Sen. Brian Schatz (D-Hawaii). “It will not be enacted as is. Everybody needs to sit with that and get comfortable with it.”

Sen. Jon Tester (D-Mont.) added that he’ll be “surprised if it doesn’t change.”

“If they send over a bill that has some challenges in it for rural America, then they’re going to have to take it back and work it over,” Tester said.

For months, House and Senate Democrats tried to negotiate with Manchin and Sen. Kyrsten Sinema (D-Ariz.) on a single social spending bill that could pass both chambers with as little drama as possible. Manchin and Sinema are signaling they’re comfortable with the top line coming down to $1.75 trillion from $3.5 trillion, with Sinema even reassuring fellow Democrats she’s largely on board with the policies proposed by Biden.

That’s good news for many of the bill’s policy provisions where Democrats have general agreement, including child care, home and community based services, universal pre-K, climate and prescription drug pricing. But paid leave, immigration and expanded Medicare benefits are still unresolved.

But even as multiple policy disputes remain, House Democratic leaders and progressives now are ready to speed toward passage of a bill that doesn’t have Manchin’s blessing and thus faces an uncertain fate in the Senate.

The fluid nature of the House bill comes as Senate Majority Leader Chuck Schumer publicly presses for the Senate to take up the social spending bill as early as Nov. 15, provided the House can pass it in the next few days. That timeline could slip, however, given the Senate’s other priorities and Manchin’s persistent calls for a strategic pause.

As he left the Capitol on Thursday afternoon for a weeklong recess, Manchin said he doesn’t “control the clock” while Schumer weighs putting the Biden-blessed bill on the floor ASAP. Asked if he would support his leader’s schedule, Manchin got in his car and then shrugged theatrically.

Earlier in the day, Manchin said on MSNBC that Democrats should “slow down” on the social spending bill and “wait and see if inflation is transitory.” Sen. Kirsten Gillibrand (D-N.Y.) also signaled in an interview that her negotiations with Manchin on paid leave are not done: “There’s still an open door.”

Some Senate Democrats are privately worried that talks could drag further once the climate and safety net legislation comes over from the House, which left one caucus member, speaking candidly but anonymously, “very concerned.” Any prolonged Senate discussions on the social spending bill would run up against the chamber’s other deadlines, including the Dec. 3 end date for current government funding, the expiring debt-limit patch and the need to pass the annual defense bill.

“We’re trying to avoid that, obviously,” said Sen. Bob Casey (D-Pa.) of a lengthy back-and-forth with the House. “There should be an alignment so that we don’t have to have a third chapter to this.”

“Each entity has its own role to play,” Sanders said. “Obviously the House will do its job, and we have to do our job.”

And some Senate Democrats are more open about what changes they want to see, even before the House sends over its finished product. For example, Sen. Sheldon Whitehouse (D-R.I.) said some of the bill’s environmental components are not yet set in stone.

There are “areas where it’s understood that the Senate is still at work, and while we will check in with the House to make sure that they stay good, we’ve got projects that are not yet concluded and that are not yet in the House bill,” Whitehouse said.

Senate Republicans, meanwhile, are starting to plot how they can best exploit differences between Manchin, Sinema and the other 48 members of the Democratic caucus. Earlier this year, Manchin’s support for an amendment from Sen. Rob Portman (R-Ohio) to trim some unemployment benefits threw the Democrats’ coronavirus aid bill into limbo for hours — and ended up cutting the benefits’ length.

Because Democrats are planning to use the so-called budget reconciliation process to evade a GOP filibuster, the social spending bill will be subject to a lengthy amendment process that could drastically change the legislation. If all 50 Republicans stick together, they only need to pick up one Democrat.

“Everybody has different priorities, and if they’re energy-related, obviously Manchin is a possibility” to cross party lines and vote with the GOP, said Senate Minority Whip John Thune.

Manchin and Sinema, he added subtly, “kind of have their own issue sets that they care about.”