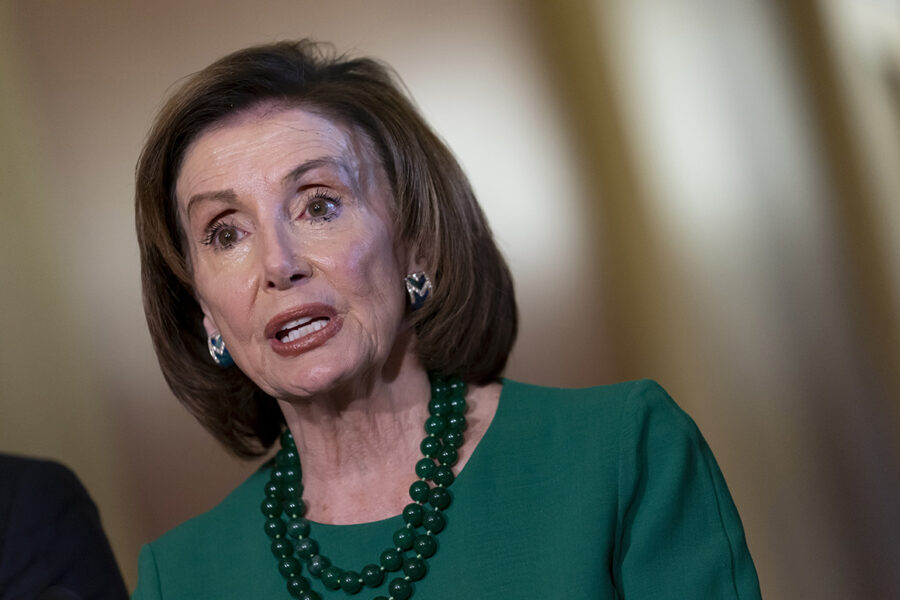 The House will reconvene Friday morning with plans to vote on both a party-line $1.75 trillion social policy bill and Biden’s Senate-passed infrastructure bill. Senior Democrats were upbeat about the prospects of wrapping up both measures Friday — despite the many hurdles still ahead with centrists — given that many in the caucus are set to embark on overseas trips ahead of next week’s recess.

Democrats are poised to take at least one step forward late Thursday night, teeing up final text of the social spending bill for floor consideration. Party leaders failed to corral the votes they need on Thursday — after several exhausting weeks spent hashing out many of the same issues — but senior Democrats privately believed they would have the votes Friday.

The planned Friday votes come after Pelosi and her leadership team spent a chaotic Thursday hustling to narrow the number of holdouts on the sweeping bill. Democrats made progress in three key areas: They reached a deal on repealing a Trump-era limit on state and local tax deductions, resolved concerns on immigration reform and convinced moderates to back a slightly altered drug pricing deal.

But Democratic leaders are still facing resistance from centrists who’ve raised procedural concerns, such as the lack of cost analysis, with the push for a vote on the sprawling social policy package this week. Pelosi circulated a letter Thursday night that included budgetary details from White House staff, but several Democrats say they want the details from Congress’s independent scorekeepers.

The Democratic whip effort intensified throughout the day, with arm-twisting on the House floor and both members of Biden’s cabinet and the president himself making calls as top Democrats scrambled to get their members on board with the massive bill.

“Things are starting to move in the right direction,” said House Democratic Caucus Chair Hakeem Jeffries (D-N.Y.) earlier Thursday, before the vote was delayed. “Everybody understands this has to happen.”

A central part of Pelosi’s Thursday push focused on the five centrist Democrats who have said they’d be unwilling to back the full social safety net and climate bill until Congress’ budget offices can prove that the $1.75 trillion legislation will be fully paid for. Privately, even more centrists had aired the same grievance. Leaders chipped away at the holdouts — originally around a dozen — whose numbers have dwindled but are still numerous enough to block passage.

Democrats can only afford to lose three votes, since Republican support will be nil.

The party has also worked to close the gap on immigration. The three Democrats who had staked their votes on immigration provisions met Thursday evening in Pelosi’s office as they tried to amend the social spending package to include stronger protections for undocumented immigrants.

But they left the meeting without a promise from leadership to update the language, which does not include a path to citizenship and faces a tough climb in the Senate.

An earlier dispute over prescription drug price negotiations in Medicare was fixed earlier Thursday, according to several lawmakers, after Rep. Scott Peters (D-Calif.) and his allies met with Democratic leaders. They emerged with tweaks to their proposal that change the number of years a drug has to be on the market before it can be subject to Medicare negotiations. Peters is now expected to vote yes, according to multiple Democrats.

Meanwhile, Biden made some calls to reluctant Democrats to urge them to vote for the social spending bill, a White House official said, though he did not specifically advocate for a vote on Thursday and left the timing of a final vote up to Pelosi. Rep. Abigail Spanberger (D-Va.) was among the lawmakers Biden called, according to a source familiar with the conversations.

Senior Democrats had hoped to make progress with those moderates thanks to the Joint Committee on Taxation, which released a slew of budgetary information earlier Thursday. The committee’s incomplete estimate found at least $1.48 trillion of spending in the bill would be covered by the legislation’s funding sources.

“It is essential that the legislation is fully paid for and reduces the debt,” Pelosi wrote in a letter to her members Thursday afternoon, where she stressed that newer provisions that weren’t included in that score — prescription drug pricing savings and IRS enforcement — are expected to raise another $650 billion.

But several centrists, who huddled to discuss the budgetary score later in the day, privately said they still needed more information before a floor vote on the social policy measure.

“It’s hard to make a decision when you haven’t seen the full text and there hasn’t been a [Congressional Budget Office] score. But I’m hopeful,” said Rep. Kathleen Rice (D-N.Y.), who hasn’t committed to voting for the bill.

It’s not just the budgetary score: Many centrists have also refused to vote for a bill that won’t pass the Senate, where the nonpartisan rules arbiter will have to vet the immigration language in the House-passed bill. In addition, Sen. Joe Manchin (D-W.Va.) has opposed the inclusion of paid leave provisions.

“There needs to be some level of understanding as to whether or not this bill, as written, can survive the Senate’s procedural process,” said Rep. Stephanie Murphy (D-Fla.), a centrist leader.

For her, that includes immigration, which she said would be “selling immigrants a false hope” if any provisions are included that will simply be stripped out by the Senate parliamentarian.

House Democrats say their colleagues in the upper-chamber have refused to take their newest compromise language to the upper chamber’s rules arbiter, according to several people familiar with discussions. But those Senate Democrats have countered it’s because they don’t have a full CBO score.

Upper-chamber Democrats are still publicly projecting confidence they can take up the social spending bill before Thanksgiving, but they also could go to a long-delayed defense policy bill if it’s not ready. The Senate recessed on Thursday afternoon and returns Nov. 15.

Before their postponement until Friday, Pelosi and her leadership team had mounted a forceful march to bring the social spending plan to the floor Thursday evening. During a two-hour meeting of the caucus, key committee chairs painstakingly outlined the provisions in the massive domestic policy proposal as they readied members to vote for one of the largest bills in history.

“We’re going to pass both bills,” Pelosi told reporters at her press conference after the meeting, referring to social spending and the $550 billion Senate-passed infrastructure bill. Still, she declined then to provide a firm schedule.

Months of infighting over Biden’s two giant bills has roused impatience to vote this week among the Democratic caucus — anxiety heightened by the party’s shellacking in Virginia and other states in Tuesday’s election.

After several failed attempts to clear one or both of Biden’s priorities, many House Democrats said they were unwilling to leave the Capitol this week without achieving something.

“At some point, we’ve got to pass something. If Joe Manchin’s saying it’s gonna be weeks, let’s pass something on the House side,” said Rep. Ami Bera (D-Calif.).