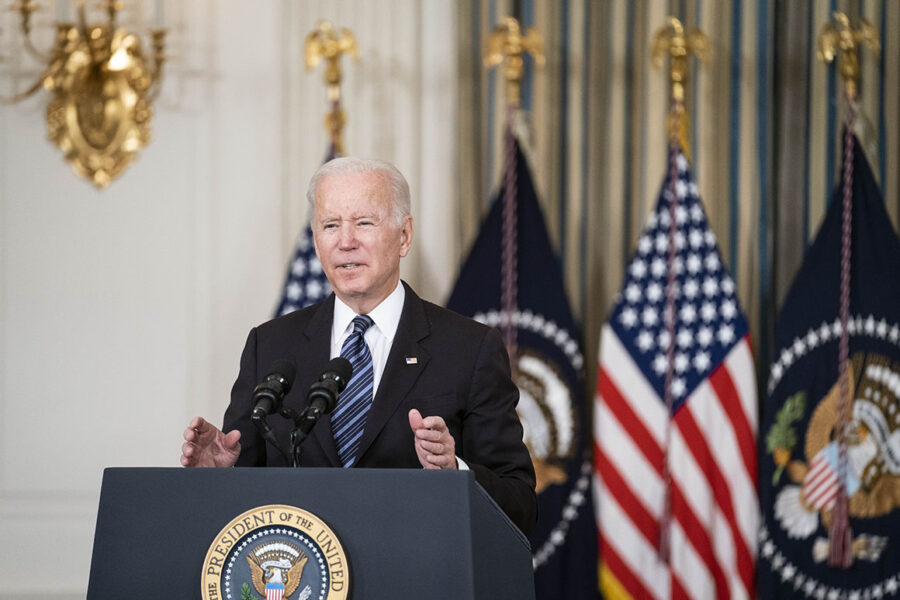 President Joe Biden has spent months watching his poll numbers sink as the economy appeared to be losing altitude throughout the fall. That narrative may have changed Friday.

Government data showed that the U.S. added 531,000 jobs in October — and hundreds of thousands more than initially reported in the two previous months — lending fresh ammunition to Biden’s argument that the economy is strengthening even as rising inflation, supply chain backlogs and labor shortages have forced the administration back on its heels.

The data could help stem the loss of faith among Americans in his handling of the economy, especially as the coronavirus pandemic eases: Nearly three in five people disapprove of his economic stewardship, a 14-percentage-point rise since April, an NBC News poll earlier this week showed.

“Yes, there’s a lot more to be done. We still have to tackle the costs that American families are facing,” Biden said at the White House on Friday. “But this recovery is faster, stronger, fairer and wider than almost anyone could have predicted.”

The jobs report shows the labor market improving across the board, with gains in nearly every sector and average hourly earnings rising another 11 cents, contributing to a 4.9 percent increase over the past 12 months. The unemployment rate dropped to 4.6 percent.

It also illustrates how the economic impact of the surge in coronavirus cases caused by the Delta variant has ebbed. The leisure and hospitality sector, which has been most vulnerable to Covid surges, added 164,000 jobs in October, and industry wages have risen more than 11 percent over the year. The number of people unable to work because their employer closed or lost business due to the pandemic dropped by nearly a quarter from September to October — from 5 million to 3.8 million.

“Americans have good reason to be anxious about the economy as the Delta wave hurt growth and ignited higher inflation,” said Mark Zandi, the chief economist at Moody’s Analytics who is frequently cited by the Biden administration. “But today’s report shows that as Delta winds down, the recovery is getting back into gear.”

Still, some weaknesses remain. The economy lost 65,000 jobs in state and local public education in October. Wages overall have yet to catch up to inflation, which has been accelerating faster. And the challenge for the administration remains how to get the message out about a strong recovery amid the surge in prices of gasoline and many household items that have increasingly dominated the conversation.

Alongside other short-term economic issues that Americans can see in their communities — empty store shelves due to supply chain backlogs or business closures due to labor shortages — there has been a pervasive sense that the worst is yet to come: Nearly half the country believes economic conditions will sour further in the next year, an AP-NORC survey this week found.

Even supporters of Biden’s economic agenda acknowledge that despite clear gains over the past 10 months, most Americans are still focused on the economic pain.

“Joe Biden was supposed to be the jobs president — that’s what he promised, and that’s what he is,” said Claudia Sahm, a former Federal Reserve economist now with the Jain Family Institute. “But somehow, they’re playing defense on, ‘Oh, inflation,’ instead of offense on, ‘Oh, look at the millions of jobs that came back.’”

The White House maintains that while the hurt Americans are feeling from higher gas prices and grocery bills is real, the underlying economy is continuing to improve. Senior administration officials highlight rising wages, a drop-off in weekly unemployment claims and a return to pre-pandemic levels of consumer spending as evidence their plan is working.

“You can’t get away from the fact that this is an underlying very strong economy that’s delivering the goods to the American worker,” White House economist Jared Bernstein said in an interview before the jobs report.

At the White House, the focus from Biden on down has been on a two-pronged approach: acknowledging the downside while emphasizing how much better things are than they were — and than they would have been without the relief spending.

“The president has incorporated the challenge of elevated prices. He’s talked about what that means to family budgets,” Bernstein said. “But we’ve also stressed the reality of this economic moment, and what that reality would likely have looked like absent our interventions.”

But that has not lessened the intense focus on rising inflation. Biden has been asked about spiking prices or supply chain issues at each of his last three major media events, press conferences in Glasgow and Rome and a CNN town hall in Baltimore. And the issues have come up in at least a dozen press briefings since early October, a review shows. Republicans and even some prominent Democrats say Biden shares the blame for pushing multitrillion-dollar spending plans since taking office.

“It seems pretty clear that the principal concern is the kind of overheating that I was concerned about,” said former Treasury Secretary Larry Summers, who has been warning for months that Biden’s big-spending agenda — especially the nearly $2 trillion relief package enacted in March — risked creating a spike in inflation.

Much of the criticism the administration has received has centered on that package, which Biden signed into law with the goal of quickly getting back to what economists call full employment. Republicans have hammered it since the beginning as unnecessary and overly generous, with Rep. Kevin Brady (R-Texas) this week calling it “a failure, certainly, in rebuilding this economy and healing it.”

GOP lawmakers warn too that other Biden policies, particularly the vaccine mandate for federal workers and those at large companies, will only further slow the jobs recovery. Sen. Mike Lee (R-Utah), the top Republican on the Joint Economic Committee, called the jobs report a “welcome improvement” but said the labor market “is still operating well below its potential.”

“New mandates, higher taxes and more spending are not the answer,” Lee said.

But the relief package has borne the brunt of criticism so far, including from some Democrats like Summers. Critics say it has contributed to the inflation surge in part by doling out more money than the recovering U.S. economy needed or could handle, in turn fueling a spurt in consumer demand that has outpaced supply and driven prices up.

But while administration officials recognize that their relief spending pushed up demand, they emphasize that other factors out of their control, including clogged supply chains, have played a major part as well. Without that spending, they say, inflation might be lower, but the rest of the economy would look worse.