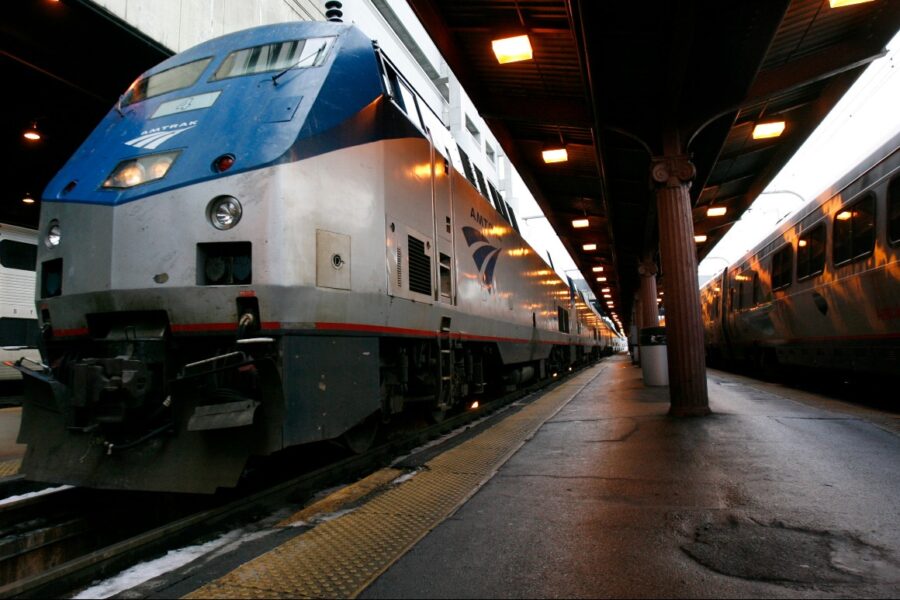 Congress has cleared a multibillion-dollar infrastructure package that could improve Americans’ commutes and quality of life, but which fails to meet President Joe Biden’s ambitious pledge to cut emissions off at their root: the transportation sector.

The bill, H.R. 3684 (117), is historic in its scope with $550 billion in new money funneled into hard infrastructure, from overhauling bridges to supercharging Amtrak’s most popular rail corridor in the Northeast. But it falls far short of Biden’s original vision, which promised to dramatically reduce the climate impacts of transportation, the single largest source of pollution. In the end, the final product was the victim of the bipartisan focus it took to get the bill done and is an example of the razor thin governing majority Democrats must navigate.

Democrats did manage to bolster climate policies lacking in that bill with a reconciliation package that, at present, will add billions for transit and passenger rail, set new expectations for states to reduce carbon emissions and makes it easier for Americans to buy electric vehicles. But even combined, the two do not approach how Biden promised to move the nation toward carbon neutrality and zero emission vehicles soon after he took office.

The dream meets the reality

Beyond getting the requisite 10 Republican votes to move an infrastructure bill through the Senate, Biden and Democratic leadership had to corral their own party to ensure both bills could pass together, including baking in support from two Senate kingmakers: Joe Manchin (D-W.Va.) and Kyrsten Sinema (D-Ariz.). And, the reconciliation bill is set to shrink to half its former size and without the centerpiece of its climate initiatives, a clean electricity program that would have incentivized utilities to switch from fossil fuels to renewable energy.

The reconciliation package was supposed to be the sugar that made the infrastructure bill go down for progressives and greens, but the evisceration of its climate package makes it a more bitter pill to swallow. In particular, greens have chafed at the focus on roadbuilding in the infrastructure bill, in the absence of guardrails that would force a focus on repair rather than expansion.

Beth Osborne, the director of transit and safe streets advocacy group Transportation for America, accused Congress of “doubling down on a dinosaur of a federal transportation program” that she said has produced a dangerous, inequitable and unsustainable transportation network.

But others in the transportation industry see a lot to like in the infrastructure bill, even if it won’t be the watershed moment for blunting climate change many had hoped for.

“It will touch every single community,” said Adie Tomer, who leads the Metropolitan Infrastructure Initiative at Brookings. “It’s going to be bigger than the New Deal.”

What’s in the bill

The infrastructure bill allocates $110 billion in new funding for roads and bridges, the large majority of which will run through long-established formulas that are funneled to state Departments of Transportation. That’s energized states desperate for cash, but sustainability advocates see it as a net loss because states will spend those dollars according to their own goals. Some states like California have reducing carbon emissions baked into their plans, but other states could just use them to build more roads, for instance.

Also missing from the infrastructure bill is any requirement that would prioritize repairing things before building new. The House-passed surface transportation bill would have prioritized this kind of “fix it first,” and also would have made states measure and reduce their greenhouse gas emissions. But the House bill got sidelined in favor of the more bipartisan Senate version over the summer.

Some of those priorities made it into the current reconciliation bill, H.R. 5376 (117), however. A community climate incentive grant program, for instance, will force states to take steps to reduce carbon emissions and encourages cities to do the same.

And a silver lining for those who wanted states to prioritize maintenance of existing infrastructure is the $37 billion bridge repair program, a safety-critical initiative to address a problem that has long been neglected, even as major bridges in Cincinnati and Memphis have been forced to close for months due to safety problems rooted in their decrepitude.

The infrastructure bill promises $7.5 billion to build electric vehicle charging stations, which will be enabled by the tax credits in the reconciliation bill and dwarfed by the $34 billion that piece has for electrification. The bill creates new programs for transit connections to affordable housing, neighborhood equity and carbon reduction and invests in low-emission aviation fuels.

The reconciliation bill also would allocate $10 billion each for transit and high-speed rail, topping off already large amounts for those modes included in the infrastructure bill. Amtrak would get $66 billion in new money, which could enable the rail line to build out its existing service not only along the popular Northeast Corridor but also in Colorado and the Midwest.

But Sean Jeans-Gail, vice president for the Rail Passengers Association, a passenger rail advocacy group, said while welcome, it won’t be enough to create a true transformation in the country’s passenger rail system.

The bill could enable Amtrak to boost its frequency and reliability across its network, but Jeans-Gail said it won’t be enough to start “launching something from nothing,” like new service corridors. He noted that much of the money could be eaten up with basic maintenance needs like track upgrades, upholstery of train cars and station ventilation. It will also fund studies and corridor identification exercises that will then need even more funding to carry out, he said.

He noted that given “these goals that we still have to decarbonize the transportation sector and to get as many people on to mass transit as possible … we’d hoped for more.”

An additional $10 billion for rail — high-speed rail, specifically — is also included in the reconciliation bill, but moving the country to high speed rail will likely take orders of magnitude more.

Despite the large figures, it could take months or even years to start seeing shovels in the ground, as regulators eager to avoid comparisons to former President Barack Obama’s stimulus program focus on good projects rather than immediate projects. The current labor shortage, compounding longtime workforce issues in the construction trades, could also slow down the pace of building and make projects more expensive, experts warn.

“This is a long-term investment,” said Sarah Kline, a transportation consultant who previously worked in the Senate Banking Committee, for Washington, D.C.’s transit agency and for Transportation for America. “It’s going to take time for these funds to hit the street.”

Not just laborers and engineers, but every level of government will need to expand their ranks to oversee the massive flow of funds and implementation of projects.

“But it’s going to take some time,” she warned.

There could also be supply chain issues as demand for materials and equipment increases on a finite number of vendors — especially vendors that satisfy Buy America requirements — but Tomer, of Brookings, said that demand is just another part of the economic benefit.

“This bill stimulates enough demand that we can expect to see manufacturers in the transportation space respond in durable ways,” he said. “And by durable ways I mean potentially expanding their production, including facility investments, as well as hiring skilled labor — with the caveat of, if they can find it.”