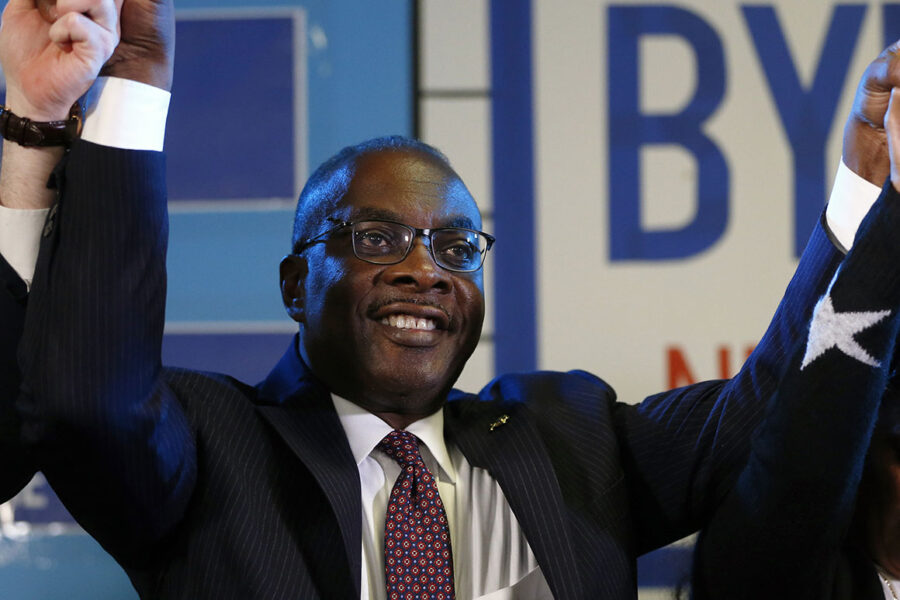 Buffalo Mayor Byron Brown infuriated progressives with his winning write-in campaign last week against the democratic socialist who beat him in the primary.

Now prominent left-wing Democrats are calling for the veteran New York mayor’s head, urging Democrats to strip Brown of his position on the Democratic National Committee.

“When you pull a stunt like this, somebody wins a primary, a working-class woman, and you go to every rich donor in both parties to fund a write-in campaign … it’s a disgrace,” said Larry Cohen, chair of the Bernie Sanders-aligned group Our Revolution.

Cohen, a DNC member himself, said he plans to organize an effort to press Democrats to remove Brown from his post on the national committee. And on Monday, India Walton, the unsuccessful Democratic nominee for Buffalo mayor, threw her weight behind the move: “Not only do I support the DNC revoking Byron Brown’s post; I believe it would set a dangerous precedent not to,” she said in a statement to POLITICO.

The endeavor, while unlikely to succeed, reflects the extent of lingering tensions between moderate and progressive Democrats following a dismal election for the party last week, in which Democrats lost the governor’s race in Virginia and sweated out Gov. Phil Murphy’s narrow victory in New Jersey. Both flanks of the party immediately blamed the other for the performance — the left claimed former Virginia Gov. Terry McAuliffe was an uninspiring Clinton-world candidate, while centrists lamented a climate of “wokeness” that they said clouded the entire campaign.

Last week’s finger-pointing also followed months of infighting between moderate and progressive Democrats on the Hill. Until its passage on Friday, left-wing lawmakers had been holding up President Joe Biden’s bipartisan infrastructure bill in hopes of passing his Build Back Better agenda, while centrists in the Senate have been casting doubt on Biden’s social spending plan. West Virginia Sen. Joe Manchin was surrounded by climate change protesters last week while in his Maserati, while a fellow moderate, Arizona Sen. Kyrsten Sinema, has been threatened with a primary by progressives in her state.

The divide among the Democratic factions, which is also playing out in battleground states like Nevada, Pennsylvania and Arizona, is one of multiple challenges facing the party ahead of what are expected to be grueling midterm elections in 2022. And the intraparty feuds are only likely to multiply next spring, when left-wing and moderate Democrats face off in primaries across the country.

“This, to me, sounds like another case of sour grapes out of Our Revolution,” said Jon Reinish, a New York-based Democratic strategist. “I think that progressives are feeling cornered, which is why you’re seeing a lot of the lashing out. … Where Democrats did badly and it was a bad night [in last week’s election], a lot of it was a loud and clear message from voters that people feel the party is going too far to the left.”

But in the general election, Brown, a four-term incumbent, orchestrated a well-funded write-in campaign, appealing to both moderate Democrats and Republicans who had no candidate on the general election ballot. The viability of his effort kept several top New York Democrats, including Gov. Kathy Hochul, on the sidelines. Earlier this year, the state Democratic Party chair, Jay Jacobs, faced blowback from progressives when, asked about Democrats failing to endorse Walton, he answered with an analogy involving former Ku Klux Klan grand wizard David Duke.

“You’ve got the establishment Democratic Party trying to block the path forward for progressives, and it’s incredibly challenging and frustrating for the grassroots,” said Joseph Geevarghese, Our Revolution’s executive director.

In addition to Our Revolution, the New York chapter of the left-wing Working Families Party also supports the effort to oust Brown from the DNC.

On Monday, Jacobs again defended the decision by some Democrats, including him, to refrain from endorsing their party’s nominee in the general election, noting that “there was no Republican on the ballot, so there was no threat of splitting the vote for the benefit of Republicans.”

He said Brown has a long record as “a good Democrat” and that while progressives may be disappointed, “you have to move on.” The effort to rebuke Brown now, Jacobs said, “is not going to be well received” within the party.

“It’s not going to go anywhere,” Jacobs said. “I’m used to people throwing bombs, and fortunately, most times they are to no effect.”

Still, moderates have not exactly refrained from reveling in the knock-down of a democratic socialist. Brown, after winning a fifth term, said on CNN of his victory, “I think it clearly is a rebuke of defund police. It is a rebuke of socialism.”

In a statement, the Brown campaign said: “Mayor Byron Brown’s Democratic Party bona fides are well known and beyond reproach. Any questions of them by Bernie Sanders or India Walton are without merit, and are simply sour grapes following a decisive write-in defeat in the Buffalo mayoral election last week.”

Stu Loeser, a Democratic strategist in New York who previously worked for Schumer, said, “Why would we kick Mayor Brown off the DNC? He’s proven he can win tough races.”

The prospect of Brown, a former state Democratic Party chair, being stripped of his leadership position in the party is slim-to-none. Even the progressive Democrats calling for the rebuke acknowledge that.

“You’re not likely going to see [Chair] Jaime Harrison at the DNC or anybody at the White House … do one thing,” said Cohen, who described the effort as an “uphill slog.”

Still, he said, “I will try to organize something, and so will a lot of other people.”

Bill Mahoney contributed to this report.