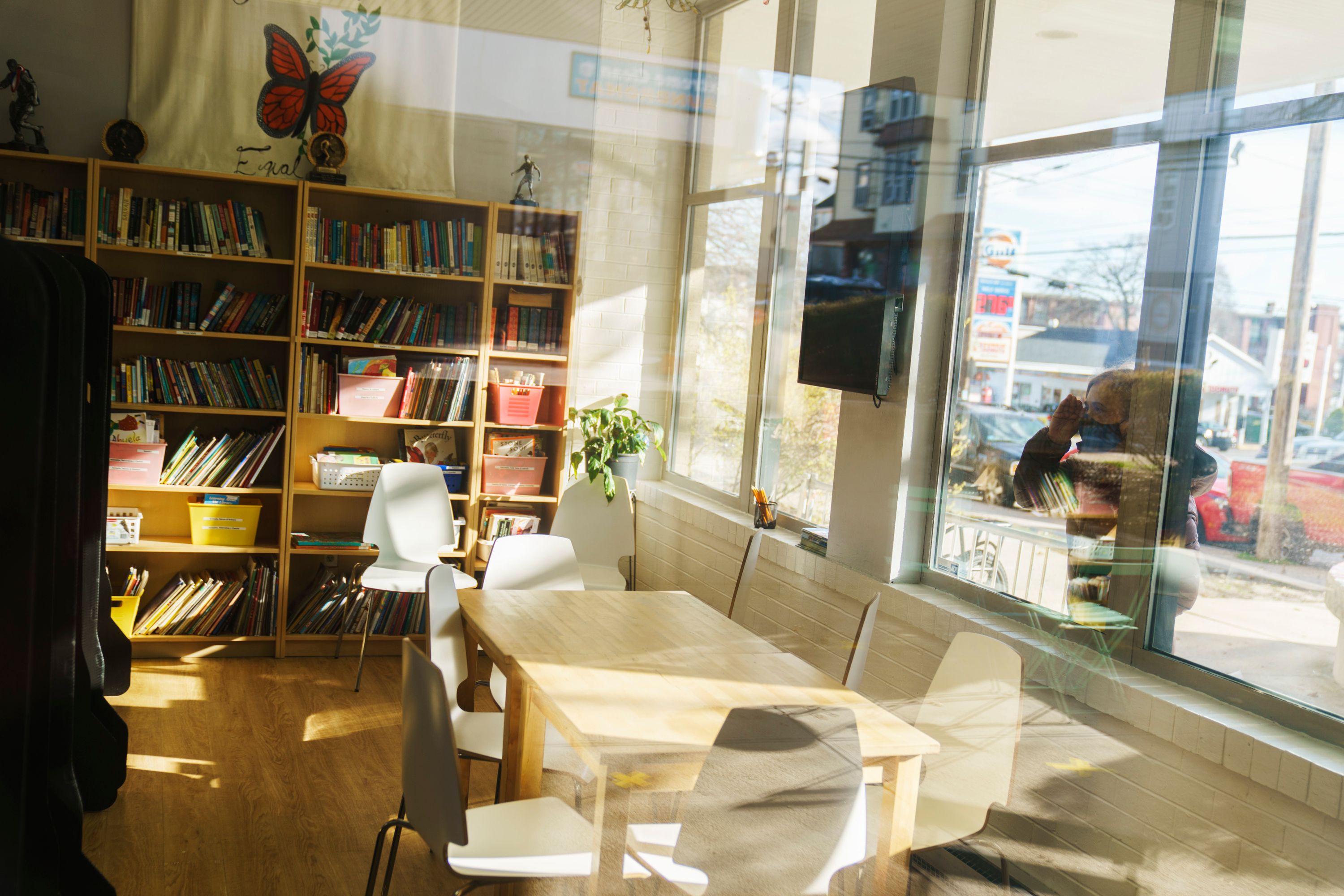 A week ago tonight, as I watched the returns in Virginia from my home in North Carolina, snippets of my reporting from around the country over the course of this past year began to feel more and more like a trail of so many predictive cookie crumbs: The centrality of schools already back in the spring in the uber-political battlefield of Ron DeSantis’ Florida. The nonstop drumbeat of the talk about school boards every time I went to Ohio. Even just the consternation about masks or no masks in schools within the chatter of the crowd at a Senate campaign event in late August in a swing-state suburb of Charlotte. And here now across the state line was the voting-booth actualization of that scattered string of indicators.

Glenn Youngkin’s surprising gubernatorial victory over Terry McAuliffe, fueled by pandemic-era, schools- and education-related angst that went well beyond the dog-whistle buzzword of “critical race theory,” constituted a kind of parents’ revolt. With a winning mix of rural, still-ginned-up Donald Trump devotees coupled with people in suburbs who had voted for Joe Biden all of 12 months back, it highlighted, even in this rigidly partisan time, the possibility of a pocket of more dynamic political terrain, unlikely alliances and scrambled electoral math. And it augured GOP strategy to come heading into next year’s midterms and even 2024 by spotlighting a potentially new Covid-created key constituency — fed-up moms and dads.

“Voters will tolerate a certain level of woke bulls— in their lives,” Jeff Roe, one of Youngkin’s main strategists, told me Monday, “but draw the line when it screws with their kids.”

“If they opened up the schools in the fall of 2020, Terry McAuliffe wins,” said Rory Cooper, a Republican strategist who lives in Northern Virginia and has been a persistent public voice on these issues.

“Democrats always have underestimated how many Democrats were mad at the school closures. In my very blue neighborhood, there were first-time Republican voters this cycle, which you would normally think is nuts a year out of Trump. But they were voting in their self-interest, which is what voters typically do, and their self-interest includes their kids,” Cooper added.

“I think that you could sum up the entire election with: The schools aren’t working.”

And maybe entire elections on the horizon. “Republicans very clearly see the Virginia campaign as a playbook in the big U.S. Senate races in 2022. I think you will see a lot of the same,” said Morgan Jackson, a top Democratic strategist in North Carolina, where Richard Burr’s seat (and with it perhaps the balance of power in the upper chamber) is up for grabs. “You ask voters who they trust more on education, they always trust Democrats — well, we let them undermine that in Virginia, and that’s ground that we have to go back and get. It’s a blueprint for Republicans. And if we’re not listening as Democrats, then that’s our fault when we lose.”

It’s easy to say now, but you could see this coming. Out and about, all year long, the hub of the most visceral political action was schools. The squabbles over “CRT” got the most attention, but that fixation, it seems, clouded the broader constellation of concerns, so consistent and pervasive the essential sentiment in retrospect was strangely tough to process in full.

“The consequences of shutting kids out of school, for a year, a year and half,” DeSantis, the Florida governor and possible 2024 Republican presidential candidate, said to state lawmakers at the outset of this year’s legislative session, “those consequences will be catastrophic and long-lasting.” It’s why he insisted on schools being open — even with the obvious risks. When I was down there reporting in March, I watched kids at an elementary school, outside on a playground for recess, and I thought of my own kids—at home, in their rooms, on screens that beamed out a plainly lamentable approximation of education. People have taken to calling it a year that was “lost.” For so many, though, it was — and, because of its repercussions, remains — worse than even that.

In May, in a packed ballroom in Strongsville, Ohio, I watched right-wing commentator Candace Owens rail about critical race theory and curriculum in schools. A lot of what she said was extreme and hyperbolic — “We are producing the dumbest kids that have ever lived in America!” — but it was impossible not to notice that Owens (at a day-long event with a roster of speakers that also included Matt Gaetz) got by far the biggest cheers.

By the end of the summer, at the start of the third pandemic-warped school year, a gaggle of teens in Union County, North Carolina, who had come to see Jeff Jackson on the stump in his Senate bid shared with me how masks had made simply going from class to class in the halls of their high schools politically fraught. Covid numbers were high at the time, but their county was one in the area with no mandate for masks. They wanted to wear them to be safe, while so many of their classmates did not. “A stampede of people, every time the bell rings,” one of them told me. “It’s so scary.”

A couple weeks later, I was back in Strongsville, and the local Republican boss stepped up to the microphone at a VFW clambake. “First thing I’d like to do,” said Shannon Burns, “is talk about school board.” Not Biden or Trump. Not Ohio’s hot GOP Senate primary. Not the area’s Trump-tapped congressional challenger. School board.

In the stretch run to voting, even Mike Pompeo, a Trump secretary of state as well as a possible 2024 presidential contender, made a school board endorsement in his home state of Kansas. And school board recall efforts? All over the place — even in San Francisco, with Democrats angry at Democrats — and with issues, one of the nation’s foremost recall experts told POLITICO, that “cut across the partisan divide.”

In my own neighborhood, the rough North Carolina equivalent of Rory Cooper’s in Virginia, this fall I, too, started to feel people at polar ends of the political spectrum inching closer and closer together on specific, schools-centric issues like masks. Their shared thoughts distilled: When can our kids take them off, especially as more and more of them get vaccinated? Because what they’re giving up is not now, and arguably never has been, commensurate with the risk they’re taking on. People who don’t talk politics, or who recently haven’t talked much at all, period, because of political disagreements only exacerbated by the pandemic, are adjusting to the reality of unexpected like-mindedness.

No wonder Virginia went the way it did.

Even the McAuliffe campaign knew something was up from the start. “Given the fatigue many Virginians faced after school closures and COVID, McAuliffe started the race at a disadvantage on education,” the campaign wrote in an after-action memo released the other day. “Our polling back in July saw Youngkin with a one-point advantage over McAuliffe with education which held true throughout the rest of the campaign.”

“Having school-choice people in the same room with a CRT person with an advanced math [person] along with people who want school resource officers in every schools—that’s a pretty eclectic group of people,” Jeff Roe told my colleague Ryan Lizza last week. “It wasn’t just CRT,” said Kristin Davison, another top Youngkin adviser. “That’s not what we were focused on here; it was more ‘parents matter.’” Parents matter—“as clear of a mandate as you get in politics,” as Cooper put it in the Washington Examiner. “Parents said our schools are broken and elected the candidate who promised to fix them.”

Now they are. And the message to Democrats? “You’re going to keep losing if you don’t pay attention to parents,” one mom from the suburbs of Virginia told CNN.

It’s not the same everywhere, of course, as the potency of the issue varies. In Wisconsin, for instance, a school board recall effort backed by CRT-animated opponents failed in a suburban area that helped elect Biden president. “If the Mequon school board had turned out differently, then I’d be more concerned,” said Irene Lin, the campaign manager for Tom Nelson, a Democrat running for Senate in Wisconsin in a bid for Ron Johnson’s seat. She told me she’s more worried heading into next year about inflation, supply chain problems and any Kenosha and Kyle Rittenhouse fallout. And some polling suggests schools aren’t the most intensely motivating issue for all or even a majority of parents, and plenty, needless to say, can happen and change between now and November 8, 2022.

Still, though, say analysts and operatives, Democrats all over the midterms map need to alter their approach in how they talk about this if they are to be seen again by enough of the voters that matter the most as the best bets to address schools.

“Public school has transformed in the past 18 months, and denying this is a surefire way to alienate voters,” Natalia Mehlman Petrzela, the author of Classroom Wars, wrote in a piece last week in the Washington Post. “The Democrats,” she told me Monday, “really failed in not acknowledging the frustration that a lot of people who would usually be on their side were feeling with schools.”

“I think you’re going to continue to see it play out in the blue rings around large metropolitan areas,” Cooper said.

I think of Washington and New York. Chicago and San Francisco. I think of Milwaukee and Phoenix and Philadelphia and Atlanta. I think of where I live.

“Democrats have for a long time talked about raising the opportunity for all children, and I think where Republicans are winning the messaging war right now is they are focused on raising opportunity for your child,” Jackson, the Democratic strategist in North Carolina, told me.

“And regardless of the policy application—mask or no mask, regardless—I think Democrats have been too rigid in a lot of these places saying it’s only about saving lives. Well, that’s really important, critically important, but when my kid is in crisis, that’s what I’m focused on. And I think Republicans have tapped into that anger, that concern, that crisis mode,” he said. “And Democrats have left that door open.”