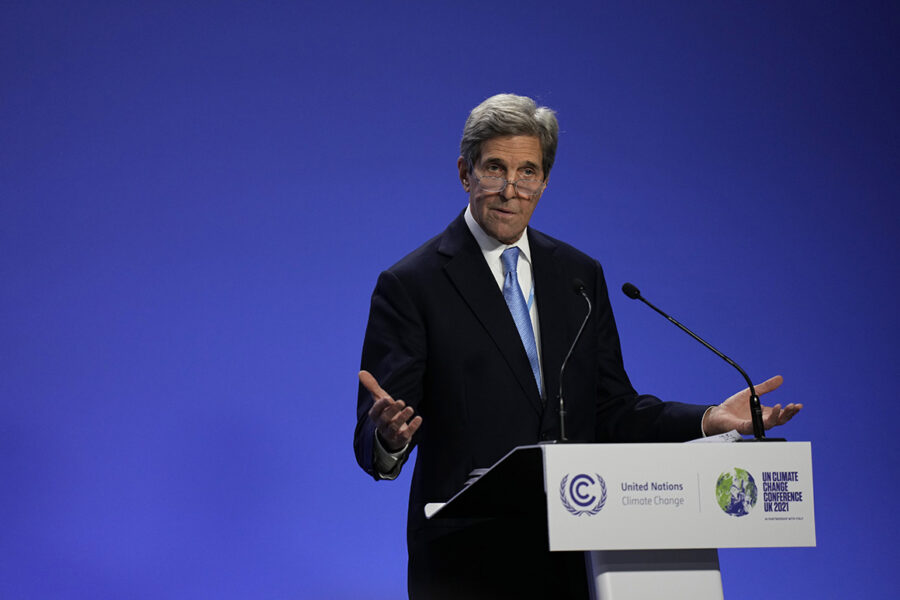 GLASGOW, Scotland — The United States, the European Union and the U.K. drew a sharp rebuke on Thursday from developing countries who accused them of trying to shift the burden for fighting greenhouse gases under a plan calling for nations to more frequently report whether they were on track to meet their Paris climate agreement goals.

The group of developing countries, which includes China and India, slammed the effort by U.S. climate envoy John Kerry and European negotiators for countries to conduct the reviews of their climate initiatives more often, saying that the rich world had pumped most of the carbon dioxide into the atmosphere that was causing the changes in the climate.

“We need to fight the war against this carbon colonialism, which is very risky for our countries and is completely ignoring that there are historical responsibilities,” said Bolivian chief negotiator Diego Pacheco Balanza, who chairs the 22-member “like-minded” countries group that includes India, China, Indonesia and Saudi Arabia.

The issue has emerged as one of the most contentious in the talks among the nearly 200 governments that are aiming to finalize many of the rules laid out under the 2015 Paris agreement to keep average global temperatures from rising more than 2 degrees Celsius from pre-industrial levels. Critics say that the policies being implemented by the largest greenhouse gas polluters are falling short of that goal, and are well off the pace of what’s needed to meet the Paris agreement’s stretch target of limiting temperature increases to 1.5 degrees Celsius.

Kerry has pushed countries to revisit their plans and take stock of their emissions frequently to determine whether they were on track for those goals. “It just behooves us — in order to convey to people the seriousness of purpose — to try to revisit this as much as we can,” Kerry said at a press conference last week. “I hope we come up with a very short framework.”

But the call has incensed developing nations, and the group proposed ditching the whole section of a draft text for a pending Glasgow agreement regarding countries’ efforts to reduce greenhouse gas emissions that are warming the planet.

Under the Paris Agreement, countries agreed to update their climate plans every five years starting in 2025.

Meanwhile, a senior United States administration official on Thursday said calls from some of the nations that face the greatest threats from climate change to update official pledges every year was too extreme.

The dispute over the frequency of the national pledges comes a day after the United States and China issued a surprise collaboration agreement that spurred new optimism for reaching a broad agreement on the negotiations to advance the fight against climate change. The U.S. official told reporters it was too early to tell whether the pact with China had influenced the broader negotiations.

Under the Paris climate agreement, countries were due to update their climate initiatives this year. While some nations have upped their climate goals, not all have — or they have only modestly adjusted their targets, including countries like Brazil, Mexico and China, the world’s largest greenhouse gas polluter.

The new submissions set the word on a path of 2.4 degrees Celsius warmer than pre-industrial levels this century, according to a report by Climate Action Tracker, well short of the growing calls to aim for the 1.5 degrees Celsius target.

“We are not equally responsible for the gap, the ambition gap… developed countries have over-used their domestic carbon space and now they’re using the space of developing countries,” he said.

But the U.S. official pointed to Beijing’s decision to increase its climate action as evidence developing countries were able take action. China is the largest member of the group that Pacheco Balanza represents.

China has said it would keep revisiting its 2030 climate plan, and agreed under its pact with the U.S. on Wednesday to try to reduce its emissions of methane, a potent heat-trapping gas.

The current option on the table at the talks would require countries to provide an update on their climate pledges in 2022. But some nations, including those in a nearly 80-country alliance calling for the world to hold temperatures to the 1.5 degrees Celsius mark, want the assessments to come every year.

“We need to have everybody in this group be accountable for what their their leaders and their ministers have committed to,” Tina Stege, the lead negotiator for the Marshall Islands and chair of the so-called High Ambition Coalition, said this week. “That’s really the basis for the trust that we have to get ambitious action, ambitious outcomes.”

The division on how responsible each nation is for slashing emissions reflects long-standing friction between developing nations and richer countries.

Developing countries say richer nations must bear the burden to slash emissions and provide assistance like finance and technology transfers since it is their pollution that is causing the climate change currently afflicting the planet. But developing nations are projected to account for a bulk of future emissions, meaning those countries must achieve economic growth in a greener way to slow temperature increases.

Pacheco Balanza said the concept of evaluating climate progress next year would break from the plans laid out in the Paris climate agreement.

And he criticized developed countries for failing to fulfill finance obligations laid out in the Paris climate agreement, Pacheco Balanza said. Rich nations missed a goal to deliver $100 billion annually in climate finance to developing countries by 2020, but have vowed to hit that by 2023 — though without making up for the shortfall, something developing nations are still arguing for in the talks.

The senior U.S. official also said the U.S. would oppose efforts to create a fund to compensate other countries for “loss and damage,” or the climate devastation largely caused by historical emissions from rich countries. The U.S. has long held that position, frustrating low-lying and other nations vulnerable to climate change who want developed countries to shoulder more responsibility for climate change.