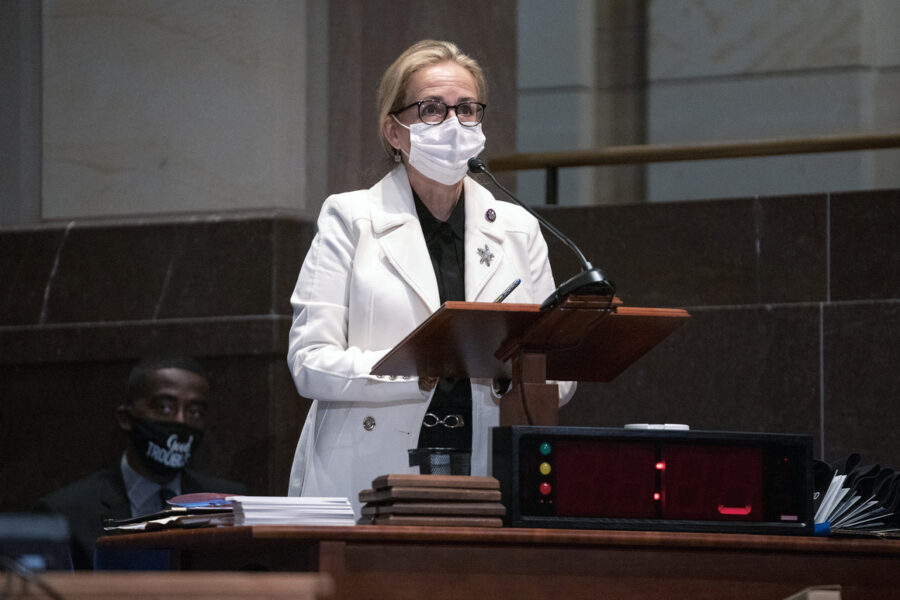 One year later, after enabling Joe Biden to flip one of the nation’s most critical swing states, their lurch in the opposite direction is a cause for alarm among Democrats.

Largely overlooked amid the party’s dismal suburban results in Virginia and New Jersey last week, Republicans regained ground in the vote-rich Philly suburbs after years of losses under Trump. The GOP flipped multiple row offices in populous Bucks County, carried a state Supreme Court race there, and even came close to winning seats on the county council in Delaware County, where Biden romped by nearly 30 points in 2020.

Pennsylvania will be home to highly competitive House, Senate and gubernatorial races in next year’s midterm elections — and the GOP’s local comeback here shows that Democrats’ newfound shakiness among suburban voters reaches far deeper than one or two states.

“This November was an early insight into what Democrats could be facing in the suburbs in 2022,” said Dan Sena, former executive director of the Democratic Congressional Campaign Committee. “The suburbs have become much more competitive for Democrats than they have been in the last two elections, and provide opportunities for Republicans to make gains.”

Biden’s suburban fade is no small matter. The big margins produced by the suburban Philadelphia counties of Montgomery, Bucks, Delaware, and Chester — where Biden outperformed Hillary Clinton — allowed him to win the state back from Trump in 2020.

The most recent election results, however, suggested the GOP is on much favorable footing in these areas now that Trump is out of office. From Loudoun County, Va., to Bucks County, Pa., suburban voters appeared to reject the idea that every Republican candidate is a Trump foot soldier. Just as Virginia Democrats sought to paint Youngkin as a Trump acolyte, Pennsylvania Democrats sought to tie local Republican candidates to the former GOP president — and there were few signs that it worked.

Just as in Virginia, where the fleece vest-wearing Youngkin did not campaign with Trump in the general election, GOP candidates likewise kept Trump at arm’s length in the Philly suburbs.

“Throughout [southeastern Pennsylvania], I can’t think of a candidate, whether it was a judge candidate or a township supervisor or a county row office race, that embraced Trump,” said Mike Conallen, former chief of staff to Rep. Brian Fitzpatrick, a Republican who represents Bucks County.

Conallen pointed to Bucks County District Attorney Matt Weintraub, a Republican who won reelection and outperformed other successful GOP candidates on the ticket. He ran as a moderate who had managed high-profile prosecutions and supported diversionary programs.

“There was not a whisper of Trump,” said Conallen. “It’s not like he was distancing himself from Trump, but he just never, ever talked about it, and realized it’s just not a winning formula anymore.”

Tom Bonier, chief executive of the Democratic data firm TargetSmart, said a question going into 2021’s off-year elections was whether Trump’s base would go to the polls when he wasn’t running for office.

The fact that Republicans saw increased support in the collar counties surrounding Philadelphia, as well as the suburbs of Virginia and New Jersey, also “tells us that a lot of what happened in these races was actually driven by more national trends, which is interesting by itself because generally these off-year elections tend to be the least nationalized,” Bonier said.

Republican Party operatives listed a familiar litany of issues that have gained national prominence — inflation, education, immigration and crime — when explaining why voters in Philly’s suburbs returned to the GOP this year.

“I had so many people talk to me about the books that they’re finding out are in their schools,” said Bucks County Republican Party chair Pat Poprik. “That woke up a lot of people.”

Poprik said outrage over schools and crime drove more residents in Bucks County to get involved in the GOP: A party training session that normally draws 30 or 40 people, she said, brought out hundreds this year.

GOP ads that aired in the Philly media market accused Democrats of being tied to groups that want to defund the police and of being weak on crime, while touting Republicans as “independent” candidates who had been endorsed by law enforcement and labor unions. One spot drew attention to crime in the city of Philadelphia, where homicides are at a record high, and warned that Democratic state Supreme Court candidate Maria McLaughlin “would make it worse.”

While McLaughlin won three of the four suburban counties, she lost Bucks County narrowly to the Republican running for the state Supreme Court, Kevin Brobson. In 2020, Biden won Bucks County by 4 percentage points.

One upside for Democrats in next year’s elections is that GOP candidates will have a much harder time keeping Trump on the sidelines. The early frontrunner for the Republican nomination in Pennsylvania’s gubernatorial race is Lou Barletta, a former congressman who was one of the first elected officials to back Trump in 2016.

Trump has already endorsed a candidate, Sean Parnell, in the race for an open Senate seat in Pennsylvania. Parnell, who is close with Donald Trump, Jr., has faced allegations of domestic abuse in child custody hearings.

Several Democratic consultants pointed out that the swings toward Republicans in the Philly suburbs were unlike the double-digit swings to the right that took place in Virginia and New Jersey: They were smaller shifts that reflect the reality that suburbs like Bucks County are up for grabs by either party, they said.

Still, optimism about their chances in the Philly suburbs is surging among Republicans after this month’s races. The National Republican Congressional Committee added Montgomery County Rep. Madeleine Dean, who won by nearly 20 points in 2020, on its list of “offensive targets” one day after the Nov. 2 election.

Dean said her name being added to the list “tells me that they know Pennsylvania is critical and important, and we have been for many election cycles.” To succeed next year, she said, Democrats need to draw attention to achievements such as coronavirus relief legislation and the infrastructure package.

“I predict Pennsylvania will be pivotal again,” she said. “What I think we have to do is stop telling and simply show — we have to show the fruits of our labor.”

Cecile Richards, the former president of Planned Parenthood who is now co-chair of the top Democratic outside group American Bridge 21st Century, agreed.

“What’s really important, with all the noise that’s happening, is that we both spend time listening to suburban women but also make sure they understand who is actually pushing for the things that they need in their lives whether it’s affordable child care access, support for elder care, so many things,” she said. “I don’t think this is a permanent shift. But I also think it’s a cautionary tale.”