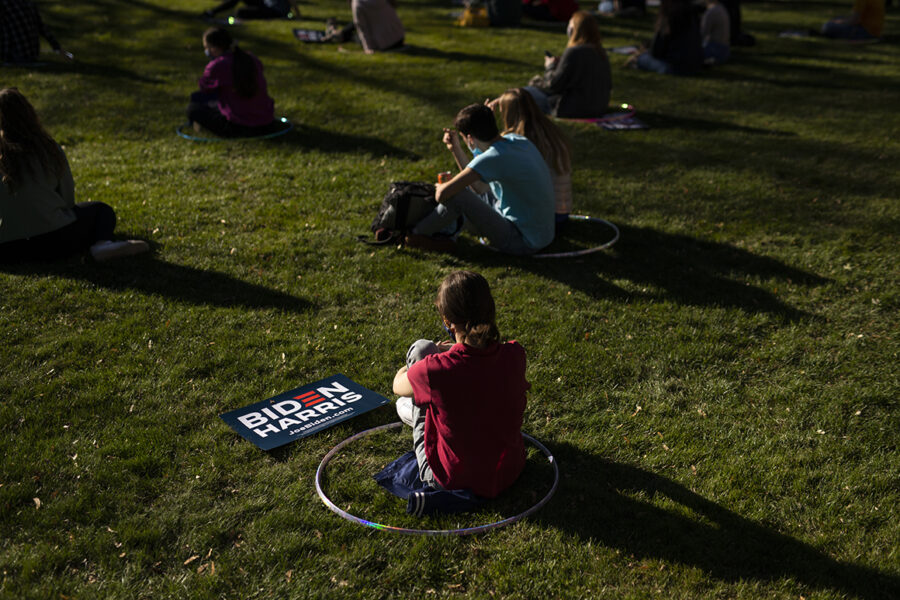 The kids are not alright.

The College Democrats of America — the Democratic Party’s national organization presiding over 500 chapters on campuses across the country — is in turmoil.

The group’s leaders are publicly firing off accusations of anti-Blackness, Islamaphobia and anti-Semitism at each other. Impeachment proceedings are now in the works against the organization’s new vice president, Nourhan Mesbah, who is Muslim. College Democrats say that screenshots of tweets that their peers sent in adolescence spread rapidly through group texts, which already caused a student running for president of the group to withdraw their candidacy in September. And national advocacy groups for Muslim and Jewish Americans are now weighing in with criticism.

The conflict has gotten so messy that the Democratic National Committee is considering disaffiliating with the national collegiate organization altogether and creating a partnership with the state groups underneath the national umbrella, according to a Democrat familiar with the discussions. The DNC declined to comment.

The clashes over religious bigotry and race within the College Democrats of America (CDA) reflect, to a degree, larger debates happening throughout politics. But the next generation seems poised to escalate them further. Some CDA members argue that the internal frictions constitute a turbulent but morally necessary reckoning with systemic racism. Other Democratic officials see it as a bunch of college-educated, hyper-woke kids trying to play politics in a way that’s off-putting to many voters.

“They are caught up in their own drama and playing ‘Boys State’ government,” said the same Democrat. “They think they’re the hottest s— on Earth.”

The controversy began in September when Tasneem Ahmad Al-Michael, a Muslim and former vice president of the CDA abruptly ended his presidential campaign after a 2014 tweet in which he used a racial slur resurfaced, CDA members involved in the election said. He said the subsequent attacks on him and his campaign team prompted him to pull out of the race. “What I said as a 15 year old prior to being in politics was ignorant, inappropriate, and flat out wrong,” Al-Michael said in a text message to POLITICO. “It doesn’t define me, my character, or invalidate the work that I continue to do.”

New president and vice presidential candidates subsequently emerged, including Mesbah, who was serving as the CDA’s director of Inclusion, Diversity, Equity, and Access (IDEA).

The day before the election, the CDA’s Jewish Caucus began sharing a screenshot of a 2016 tweet Mesbah wrote while watching a debate between Democratic presidential nominee Hillary Clinton and Republican Donald Trump.

A 13-year-old at the time, Mesbah wrote, “I blame this debate on the yahood,” an Arabic word which is sometimes used as a slur against Jewish people. She also tagged another user with a history of anti-Semitic tweets.

Mesbah still narrowly won the College Democrats’ vice presidential race but soon consulted with the DNC on a statement. The lengthy initial draft was unapologetic, according to a Democrat who saw it, but after lots of editing, it stated: “I apologize for my words in 2016. My comment was in no way rooted in malice or anti-semitism, especially as a 13-year old, relatively new immigrant from North Africa, with a different regional dialectic linguist comprehension.”

She added that, “while I take responsibility for my actions, I am hurt by the Islamophobia and xenophobia that continues to unfold.”

The CDA board also passed a resolution, 19-3, censuring Mesbah and requiring her to “undergo training about antisemitism and cultural sensitivity from the Anti-Defamation League, the American Jewish Committee, or the U.S. Holocaust Memorial Museum.” As of today, she has not participated in such a training, according to a person familiar with the matter.

Even so, the controversy seemed to die down until last week.

On Nov. 12, Mesbah’s successor as IDEA director, Jeremy Ward, released a report calling for Mesbah to resign as vice president “due to the harm caused to two different communities.”

Ward had initially announced the independent investigation into Mesbah’s conduct in September. Circulated internally on Nov. 10, it concluded that Mesbah’s past tweet was anti-Semitic and that her claims of Islamaphobia were unfounded.

It also included a new accusation that Mesbah exhibited “a pattern of discrimination against members of the black community, specifically black women.” Ward wrote that the report did not disclose any specific instances of “anti-blackness” behavior so as to ensure that those who had complained would not face retribution or harassment. Ward did not respond for comment.

Following the report’s release, several college Democrats joined in calling for Mesbah’s resignation and, if necessary, her impeachment. But others have accused Ward of a political hit job disguised as an objective investigation.

Matt Nowling, the former interim president of the College Democrats who helped create the IDEA director position last year as part of a series of inclusion reforms, backed Ward. “I believe that the work of that director is really important, and that the investigation that they completed has merit. And I encourage the executive board to listen to the recommendations of that department.”

In an interview with POLITICO, Mesbah said she had been “held to a double standard solely because of the way I look, the faith that I practice.” As evidence of that, she also said a member of the college Democrats called her a “terrorist supporter” last spring because of her strong pro-Palestine views. She declined to name the person.

“Everything I say is torn to shreds,” she said. “I can’t just make a tweet about pop culture without it being ripped apart for underlying messages and hidden meanings.”

Even before the report was made public, however, word of its findings were trickling out and causing a stir nationally. As it was just about to be released, the Council on American-Islamic Relations, the largest Muslim civil liberties organization in the country, wrote a letter calling on the CDA to probe accusations of “rampant anti-Muslim bigotry” inside the organization and backed up Mesbah.

“We have received allegations that the current National I.D.E.A Director has dismissed credible allegations of Islamophobia while using his position to unfairly and baselessly single out and target Vice President Mesbah,” the group’s deputy director wrote.

Palestine Legal, a legal group dedicated to supporting the rights of people in the U.S. who speak out for Palestinian freedom, has offered Mesbah resources during the controversy.

And 12 Muslim advocacy and pro-Palestine groups, including CAIR, released a letter denouncing CDA for endorsing sensitivity trainings led by ADL and AJC, which they blasted as “organizations with a history of anti-Muslim and anti-Palestinian actions.”

An ADL spokesperson told POLITICO that the group “strongly and unequivocally condemn(s) all anti-Muslim attacks and Islamophobia, including those directed against Nourhan Mesbah….Mesbah’s apology for her past antisemitic tweets is a welcome first step, and we would be more than willing to work with her to understand why the statements she made in her tweets were so offensive.” AJC did not respond to a request for comment.

The controversy has been covered in the conservative press, which has held up the fallout as an example of antisemitic bigotry among some young Democrats. For the CDA, meanwhile, it’s been another internal headache as students grapple with the politics of race, identity and social justice. Last summer, amid Black Lives Matter protests triggered by George Floyd’s murder by police, Nowling abruptly resigned as the CDA’s communications director, releasing an open letter urging the organization to create “an environment that is welcoming to BIPOC students and students that are low income.” That set off a series of events that ended with the then-CDA president resigning and Nowling taking her place.

“I think that it’s important that organizations institute reforms and changes and work towards a future where organizations potentially create space for marginalized communities and empowers them and ensures that everyone has a space,” Nowling said.

As he pointedly noted: “The college Democrats is a pipeline to the Democratic Party and the broader progressive movement.”