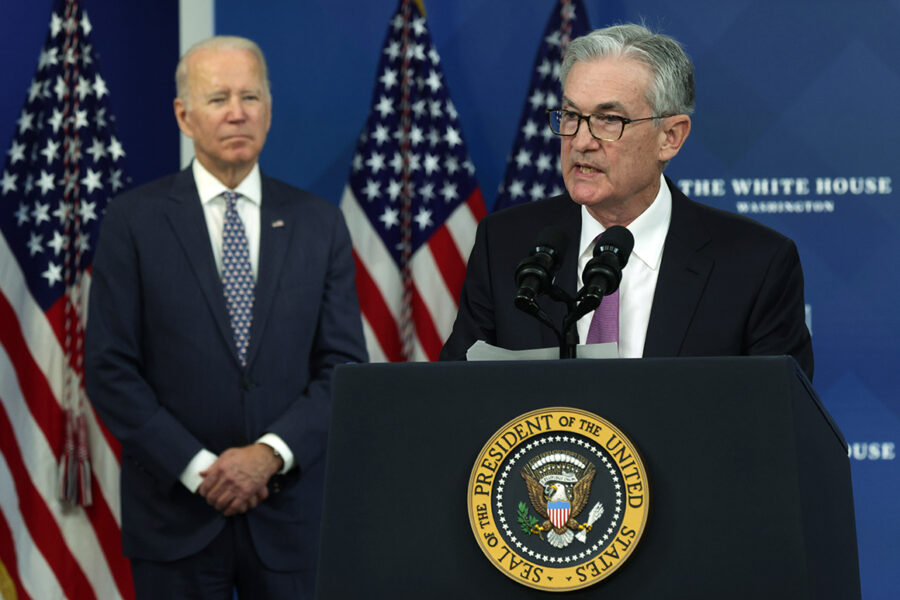 President Joe Biden said Monday he will reappoint Federal Reserve Chair Jerome Powell as head of the U.S. central bank, opting for continuity in the government’s most powerful economic post as the specter of rising inflation looms in an election year.

Powell — a Republican and a Trump appointee — is expected to win Senate confirmation with bipartisan backing, driven by his record in heading off a financial crisis at the onset of the pandemic and steering the economy through the crippling recession that followed. But he’ll face intense scrutiny from some Democrats such as Sen. Elizabeth Warren for overseeing a rollback in Wall Street rules, an issue that has sharply divided progressives over whether he deserves a second term, and over a trading scandal that forced two top Fed officials to resign.

The decision came down to Powell and Fed Governor Lael Brainard, a Democrat and former Obama Treasury official who was supported by many progressives. The White House announced it will nominate Brainard as vice chair of the board, the No. 2 position at the central bank.

“I’m confident that Chair Powell and Dr. Brainard’s focus on keeping inflation low, prices stable, and delivering full employment will make our economy stronger than ever before,” Biden said in a statement. “Together, they also share my deep belief that urgent action is needed to address the economic risks posed by climate change, and stay ahead of emerging risks in our financial system.”

Biden’s decision to stick with Powell caps a tumultuous four-year term for the Fed chief marked by relentless public attacks by then-President Donald Trump, the once-in-a-century pandemic that forced much of the country to shut down, and the emergence of new, lightning-rod issues for the Fed such as climate change, income inequality and diversity.

Powell was tapped for a second term despite criticism that he has underestimated the resurgence in inflation in the economy. He also overcame a furious, last-minute lobbying push by progressives to topple him over the trading scandals at the central bank, a controversy that he moved to contain by overhauling the Fed’s conflict-of-interest rules.

Biden’s decision, which came after months of speculation about whether he would shift gears and go for Brainard instead, restores a decades-old tradition where central bank heads are retained by presidents regardless of party to reassure financial markets and underscore the Fed’s independence from partisan politics. That practice was broken by Trump when he dumped Janet Yellen in 2018 for Powell, who had been appointed to the Fed board six years earlier by President Barack Obama.

“Now, some will no doubt question why I am renominating Jay when he was a choice of a Republican predecessor,” Biden said at a press conference on the decision. “Why am I not picking a Democrat? Why am I not picking fresh blood or taking the Fed in a different direction? Put directly, at this moment of both enormous potential and enormous uncertainty for our economy, we need stability and independence at the Federal Reserve.”

Powell’s term as chair does not end until February, but presidents usually pick their central bank chiefs well in advance to give markets time to absorb the news and to allow plenty of room for the confirmation proceedings to play out in the Senate. Stocks immediately jumped on the news once markets opened.

Senate Banking Chair Sherrod Brown (D-Ohio) and the panel’s top Republican, Pat Toomey (R-Pa.), each put out statements in support of Powell, though the two men come from opposite sides of the ideological spectrum.

“Chair Jerome Powell has led our economy through a historic pandemic, and under his and President Biden’s leadership, unemployment has fallen and workers are seeing increased bargaining power,” Brown said. “I look forward to working with Powell to stand up to Wall Street and stand up for workers, so that they share in the prosperity they create.”

Even as he goes through the confirmation process, Powell, 68, will be dealing with crucial policy questions following the Fed’s decision to begin pulling back some of the extraordinary support it launched for the economy when the pandemic began. Surging food and energy prices coupled with soaring stocks and home values have sparked fears about inflation, heightening the focus on how the Fed might respond.

Winding down the $120 billion monthly purchases of mortgage-backed securities and Treasuries is the first step toward a more significant event that many expect in 2022 — raising short-term interest rates — a step the Fed might take in the face of both elevated inflation due to supply chain disruptions and a strengthening labor market. Still, the Fed wants to ensure that its actions won’t slow the recovery as millions of Americans remain unemployed.

“Inside the Federal Reserve, we understand that our decisions matter for American families and communities,” Powell said at the press conference alongside Biden on Monday. “I strongly share that sense of mission, and I am committed to making those decisions with objectivity and integrity, based on the best available evidence, in the longstanding tradition of monetary policy independence.”

Powell will face pressure from fellow Fed officials, some of whom believe the central bank should more aggressively strive to choke off accelerating inflation. If he’s confirmed, he’ll chair a newly constituted Fed board. There are three other vacancies at the central bank: vice chair of supervision, the Fed’s point person on bank regulations, as well as two other seats.

The economy’s predicament is just one of a wide range of circumstances Powell has confronted. Job growth and wages continued to strengthen early on in his tenure, leading the Fed to begin hiking interest rates. That incensed Trump, who then spent more than a year openly berating his new Fed chief for not doing enough to turbocharge the economy. He once mused on Twitter whether Powell posed more of a threat to the country than did Chinese President Xi Jinping.

Powell steadfastly ignored the barbs — but after witnessing market turmoil in December 2018, the Fed hit the pause button on further rate increases and eventually stopped pulling cash out of the financial system.

In 2020, when unemployment had reached its lowest level since the 1960s, the pandemic struck, leading the central bank to pump trillions of dollars into debt markets to head off a massive credit freeze. The efforts lowered borrowing costs across the board, though some Democrats have decried the implementation of the Fed’s emergency programs for businesses, states and cities for enriching investors more than ordinary Americans.

Powell has had a much more hands-off relationship with Biden, who never publicly criticized the Fed and barely had any personal contact with the chair.

Yet the central bank’s concerns now go far beyond monetary policy, stretching into climate change and income inequality, which has stoked conflict with some Democrats.

The Fed leader has faced strident opposition from Warren, Rep. Alexandria Ocasio-Cortez and other high-profile lawmakers on the left for supporting deregulation under Trump as well as for not being more aggressive in pushing banks to prepare for the risks posed by climate change.

“Jerome Powell has consistently refused to take climate-related financial and economic risks seriously, which is why I’m disappointed in the president’s choice,” Sen. Sheldon Whitehouse (D-R.I.) said in a statement, a sentiment expressed by a slew of climate change advocacy groups.

“It’s no secret I oppose Chair Jerome Powell’s renomination, and I will vote against him,” Warren said in a statement, though she threw her support behind Brainard for vice chair.

But Powell garnered praise from progressives for introducing a sweeping new policy of keeping interest rates at rock bottom levels for as long as possible to benefit lower-income workers even amid signs of inflation, a historic shift that was long at the top of the wish list for liberal advocates. Prominent economists like Bill Spriggs, a Howard University professor who is also chief economist at the AFL-CIO, said keeping Powell is key to ensuring that new approach for the Fed is long-lasting.

The Fed has taken some steps on climate change. In a report last year, the central bank formally named the issue as a potential threat to the stability of the financial system. It has also now joined a global network of central banks collaborating on how to approach the problem and formed two internal committees dedicated to the topic.

Still, some activists say the Fed is not moving fast enough, urging the central bank to slow the flow of money to the fossil fuel industry. Despite the outcry from climate activists, Powell has strong relationships with members of Congress on both sides of the aisle, which should help him easily clear the 50-vote threshold.

More recently, Powell’s leadership on ethics faced criticism after revelations that Dallas Fed President Robert Kaplan and Boston Fed President Eric Rosengren had actively traded in stocks and real estate assets while the central bank was engaged in an extensive rescue of financial markets. That led both men to resign. 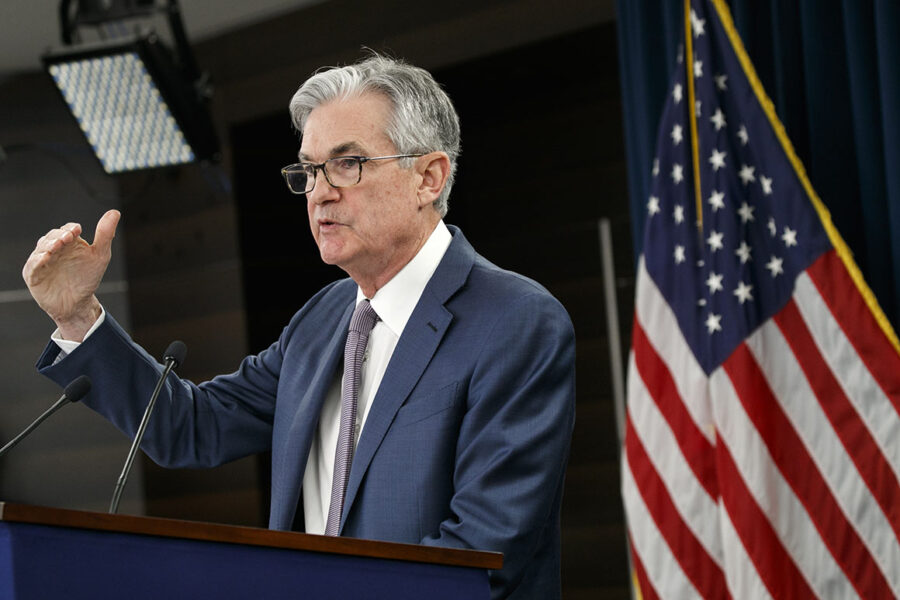 The saga spilled out into broader scrutiny of financial activity by Fed officials, including Vice Chair Richard Clarida and Powell himself.

Within weeks of the resignation of Kaplan and Rosengren, the Fed announced it will ban top officials from trading in individual stocks and bonds, as well as prohibit them from active trading. Under the new policy, central bank policymakers and top staff will have to give 45 days’ notice and obtain prior approval from internal ethics staff for all purchases and sales. They will also have to hold all investments for at least one year.

The controversy offered an additional line of attack for those eager to see Brainard named as chair. But the White House instead opted to make her Powell’s deputy.

Brainard has already been a trusted adviser to Powell on monetary matters, while investors have also gotten a strong sense of her thinking over the years through her public remarks.

Over the past four years, she built credibility with the progressive wing of the Democratic Party by dissenting more than 20 times on moves by Trump’s appointees, including on rollbacks of regulations placed on big banks after the 2008 financial crisis. She was also heavily involved with the economic firefighting conducted by the Fed last year.

Americans for Financial Reform, a progressive group that steadily criticized Powell throughout Biden’s deliberations, expressed displeasure at the president’s decision.

“President Biden’s renomination of Jerome Powell to chair the Federal Reserve Board is a major disappointment to those of us who have fought for tougher regulation of Wall Street as a key tool for protecting financial stability and building a more just and sustainable economy,” the group said in a statement.