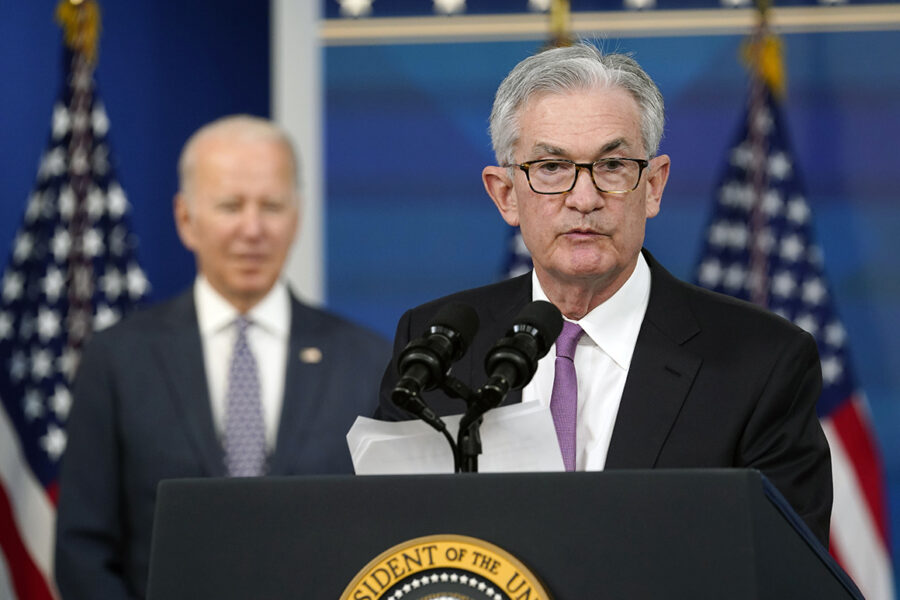 In choosing to renominate Jerome Powell to head the Federal Reserve, President Joe Biden is placing the economic future of his administration largely in the hands of a Republican selected by Donald Trump who made his fortune in private equity and enjoys overwhelming support among GOP lawmakers.

Biden passed on an opportunity to put the central bank under the helm of a woman and a Democrat — Fed Governor Lael Brainard — for years to come. Why?

In part, people close to Biden say he did it because of Wall Street’s confidence in Powell’s stewardship during the pandemic — the Dow jumped a couple of hundred points on Monday right after the news. And Biden by nature tends to favor incumbents, continuity and bipartisanship.

There also wasn’t an overwhelming case to fire Powell, though the scary surge in inflation offered one potential way out. Democrats arguing for change wanted someone tougher on bank regulation, the environment and economic inequality, but there’s little distance between Powell and Brainard on monetary policy, the main focus of a Fed chair.

Perhaps the biggest reason of all: The path to confirming Biden’s other finalist, Brainard, a loyal Democrat, looked thorny at best in the face of potentially strong GOP opposition and even some trepidation from moderate Senate Democrats, who favor Powell.

In the end, Biden did what many close to him expected: He took a longer-than-anticipated amount of time to arrive at a reasonable, moderate decision that thrilled few but carried limited risk.

“The president made a strong statement about the importance of continuity and not injecting additional uncertainty when there is already a lot of it around,” said Jason Furman, a Harvard professor and former top economic adviser to President Barack Obama who has close ties to the Biden White House. “He believes in institutions and likes the idea of there being at least one corner left in Washington that is not incredibly politicized.”

In announcing his decision Monday afternoon, flanked by Powell and Brainard, whom Biden chose as Powell’s No. 2, the president praised the current chair for his work during the pandemic.

“We have made enormous progress in this country. First and foremost, our economy is creating jobs, lots of jobs,” Biden said. He called the progress “a testament” to the Fed’s performance.

Still, he added warnings about inflation and — tellingly — noted that Powell had promised to make climate change more of a priority for the central bank, one of the main criticisms that some progressives had leveled at the incumbent.

The president also cited the need for continuity and stability at the Fed at a highly sensitive economic moment. Powell acknowledged that rising prices for gas, housing and many other items take a “toll” on families.

That toll — including a 6.2 percent bump in prices in October alone — is among the biggest risks to Democrats in the midterms and the 2024 presidential election. And at least some senior Democrats close to the White House had hoped Biden would have moved on at the Fed, pinning inflation blame on Powell and installing a more Democratic-friendly chair like Brainard. That view is shared by some on Wall Street.

The argument that Biden could have scapegoated Powell over inflation did not win in part because most in the White House believe that the president will be criticized by Republicans for higher prices no matter who is running the central bank, and Brainard’s policies would have been, if anything, more dovish on interest rates.

Progressives were split over the nomination, with some waging a campaign to try and convince Biden to dump Powell.

“It’s maddening that Biden is reappointing Powell, a man who doesn’t share the Biden vision on issues from financial regulation and the climate crisis to financial sector consolidation and cryptocurrency,” said Jeffrey Hauser, executive director of the Revolving Door Project. “Biden’s apparent hope that reappointing Powell will earn him bipartisan economic praise,” he said, “is as naive as believing a bipartisan infrastructure vote would solidify his polling numbers.”

Others, such as Rep. Pramila Jayapal (D-Wash.), who chairs the Congressional Progressive Caucus, praised the Fed chair. “Mr. Powell has demonstrated an unprecedented commitment to full employment during his first full term as Fed Chair,” she said in a statement.

In choosing Powell, the White House will avoid a new battle with Congress and can focus instead on the rest of Biden’s nearly $2 trillion social spending plan, which administration officials think will invigorate the left, boost productivity and reduce inflation. Biden was not willing to spend political capital trying to get Brainard confirmed for chair.

And on key monetary policy issues, Powell and Brainard are little different. They both favor keeping rates low to boost hiring and economic activity even if inflation continues to accelerate for a few months as the economy attempts to emerge from the Covid-19 pandemic. All of Brainard’s dissenting votes against Powell at the Fed have been on banking regulations.

Republicans, meanwhile, plan to hammer the president and his party over high prices no matter what.

“The Fed is running an emergency policy long after the emergency is over, and that is their biggest problem,” said Larry Kudlow, National Economic Council director under Trump and now a Fox Business host. “We are moving from pandemic inflation to monetary policy inflation and I think the Fed is way behind the curve. They are risking 1970s style inflation and the need for multiple rate hikes next year.”

One senior White House official attributed the lengthy delay on the Fed decision to competing issues. “We’ve been doing a lot of stuff. Lots of priorities,” said the official, who declined to be identified by name because they were not authorized to speak on the record.

The official added that in the end, Powell’s performance in the job simply warranted another term in Biden’s view.

“We have come through this historic crisis without a financial crisis and with the Federal Reserve playing its role to help the economy get on this path to full employment as quickly as possible,” the official said.

Victoria Guida contributed to this story.