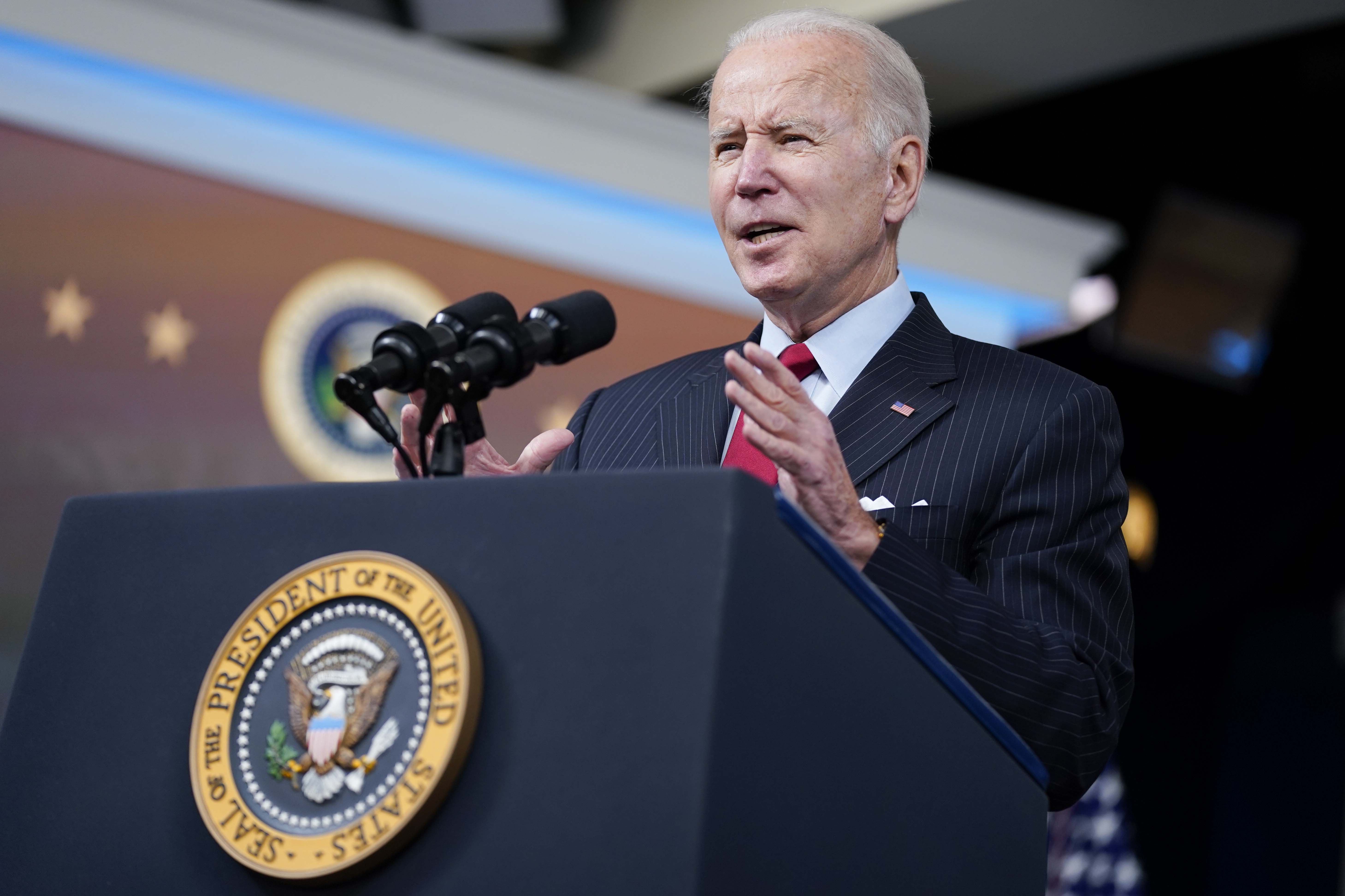 Republicans were quick to slam President Joe Biden’s decision on Tuesday to open the taps on the nation’s oil reserves, accusing him of misusing a national security stockpile for the politically expedient goal of lowering gasoline prices just before Thanksgiving.

But Biden has the GOP to thank for helping him to do it.

Legislation enacted under the Republican-controlled House during the Trump administration ordered the government to sell more than 100 million barrels from the Strategic Petroleum Reserves by 2027 to raise money for the Treasury. Biden’s Energy Department specifically cited one of those mandates when it announced Tuesday that it was selling 50 million barrels, the biggest ever release.

Releasing crude oil from the reserves is the one easy tool at Biden’s disposal to try to tamp down rising fuel prices, which have fed inflation and helped chip away at the president’s approval ratings. Weeks of anticipation about Tuesday’s move have already started to have a calming effect at the pump, said the administration, which had also coordinated with countries like China, Japan, India and South Korea to make their reserved crude available.

“Our combined actions will not solve the problem of high gas prices overnight,” Biden told reporters Tuesday afternoon. “It will make a difference. It will take time, but before long, you should see the price of gas drop where you fill up your tank and in the longer term we will reduce our reliance on oil as we shift to clean energy.”

Earlier in the day, the White House said news of the administration’s plans and its consultations with other countries had contributed to a 10 percent drop in crude prices in recent weeks. But on Tuesday, U.S. oil futures prices climbed more than two percent to move back above $78.50 a barrel.

OPEC and its partner Russia had previously rebuffed Biden’s entreaties to help lower prices by increasing their oil output. U.S. oil companies, meanwhile, have been struggling to raise their own production as investors are more interested in cash returns than increased drilling. Companies also spent much of 2020 slowing down drills as the pandemic kept fuel demand low.

Republican senators and the oil industry condemned the move, calling it a political use of crude stockpiled for use in times of hurricanes and war.

“President Biden’s policies are hiking inflation and energy prices for the American people. Tapping the Strategic Petroleum Reserve will not fix the problem,” said Sen. John Barrasso (R-Wyo.), who has criticized the administration’s efforts to limit auctions of federal land to oil producers. “Begging OPEC and Russia to increase production and now using the Strategic Petroleum Reserve are desperate attempts to address a Biden-caused disaster. They’re not substitutes for American energy production.”

Sen. Kevin Cramer, a Republican from the major oil producing state of North Dakota, joined in, saying the move was not a solution to high gas prices.

“The Strategic Petroleum Reserve is meant for supplying energy during national emergencies,” he said in a statement. “The only national emergency is President Biden’s awful energy policy in which he has purposefully curtailed American production and then embarrassingly pleaded OPEC to make up the difference.”

Oil industry experts also complained about the use of the reserve as a market fix rather than as a backstop for when supply is disrupted. That last happened in September when the Biden administration made SPR oil available after Hurricane Ida crippled oil infrastructure on the Gulf Coast.

“There’s only shades of difference between selling the SPR to pay for the nation’s VISA bill and raiding it to try to lower pump prices,” Bob McNally, head of energy consulting firm Rapidan Energy Group and former international energy adviser in the George W. Bush administration, said in an email. “Both are policy errors in my book. The key and controversial point is that this is the biggest ever SPR release and it was done without an emergency and in order to ‘send a message to the Saudis’ and lower oil prices.”

But tapping the strategic reserves for non-emergency reasons has long been a practice for presidents of both parties — including as a money-making scheme for the federal government. And the Republican Congress that reigned under President Donald Trump gave Biden some political and legal cover for his move.

Under legislation dating back to 2017 to help pay for the Trump administration tax cuts and fill budget gaps, Republicans joined with Democrats to require the Energy Department to sell off 107 million barrels of crude oil from fiscal 2022 through 2027. For Tuesday’s announcement, the Energy Department specifically cited the Bipartisan Budget Act of 2018 requirements that 18 million of the barrels be sold off to help pay for tax cuts.

The other 32 million barrels would be considered a “loan” that companies would have to repay with their own barrels in the future.

Lobbying firm Bracewell derided the move as an “SPR Tanks Giving” in an analysis note, calling the release “a political virtue signal that will give them the chance to take credit for moves the market is already making.”

Still, the well-telegraphed news that the international coalition would make more oil available seemed to achieve the administration’s goal even before Tuesday, with oil prices having subsided days ago, said Roger Diwan, vice president of energy research firm IHS Markit. Prices slid to around $76 a barrel during the past week from about $84 late last month as a new rise in Covid cases in Europe brought about fears of fuel demand falling even as expectations grew that a SPR release was in the works.

“The upward price momentum has been broken,” Diwan said in a Twitter posting. “The SPR release already accomplished its intent.”

Still, oil prices are nearly double the level seen a year ago, however, driven in large part by economic growth since the depths of the pandemic. U.S. regular gasoline prices are at an average of $3.40 a gallon, up 60 percent since last Thanksgiving.

Under the action announced Tuesday, the United States will immediately make 32 million barrels of oil stored in salt caverns along the Gulf Coast available “in response to the highest oil prices experienced in seven years,” the Energy Department said. The move “aims to ensure adequate supply as we exit the pandemic,” it added. The other 18 million barrels would be offered on Dec. 17.

Oil refiners have until Dec. 14 to bid on the oil on offer, the Energy Department said. Deliveries will start as soon as late December and end in April.

The coordinated release is the first time a large group of countries has acted in unison to put the brakes on high oil costs and is a warning shot to OPEC and Russia, analysts said. With prices having dropped earlier this week, drivers should expect to see at least a slight drop in gasoline prices by the time they fill up their tanks for Thanksgiving weekend.

“Today’s historic but very unorthodox move is a clear message to OPEC+ that it’s not the only actor on the global oil market stage,” said Louise Dickson, senior oil markets analyst at market analysis firm Rystad Energy. But “much of the downward price impact has already been priced into the futures curve over the past week since China announced it was ready to cooperate following the Xi-Biden summit” on Nov. 15.

Gasoline prices have climbed steadily for months as global demand for fuel revved up when the global economy began to emerge from the pandemic. That rising consumption outpaced production from oil companies, which had suffered financially from the sharp downturn in demand in 2020 and were reluctant to resume drilling in the face of uncertain economic prospects.

“As we come out of an unprecedented global economic shutdown, oil supply has not kept up with demand, forcing working families and businesses to pay the price,” Energy Secretary Jennifer Granholm said in a news release. “This action underscores the President’s commitment to using the tools available to bring down costs for working families and to continue our economic recovery.”

The wider oil industry acknowledged that Biden had the authority to make the sale, but warned that the effect on prices would be short-lived.

“Congress gave the president and secretary of energy broad authority to manage the SPR and it’s the administration’s responsibility to exercise that authority as they see fit,” Frank Macchiarola , senior vice president of policy at the American Petroleum Institute, said in a statement. ”We believe that any impact resulting from an SPR release is likely to be short-lived unless it is paired with policy measures that encourage the production of American energy resources.”