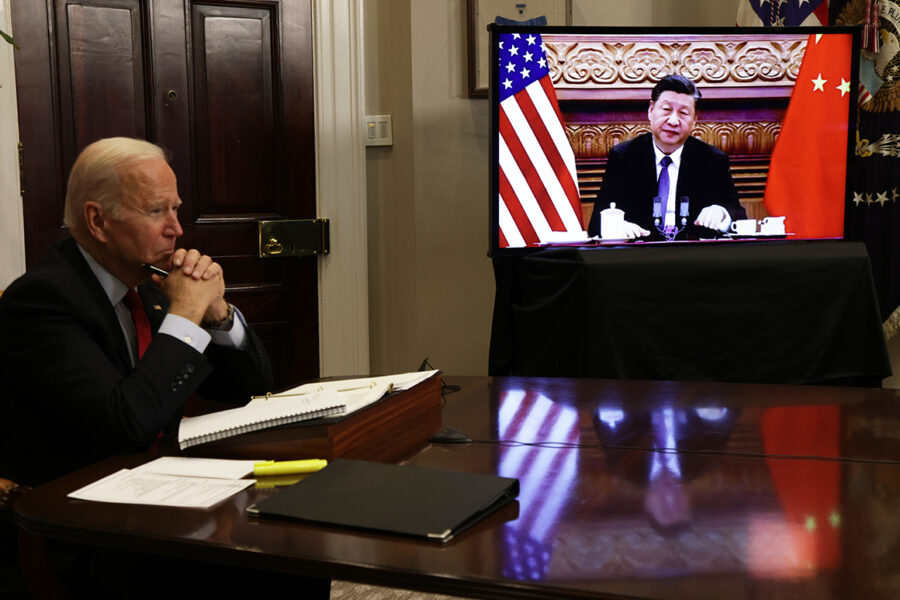 After months of watching hundreds of new nuclear missile silos being dug in the dirt northwest of Beijing, it is welcome news that President Joe Biden and Chinese President Xi Jinping seemingly agreed at last week’s summit on the need for strategic stability talks. Strategic stability — the idea that nuclear-armed countries should not be able to gain decisive advantage over one another — has taken on new importance as China expands and modernizes its nuclear arsenal.

China is expected to quadruple its number of warheads in the next decade, and is upgrading its nuclear capabilities with new missiles, submarines and bombers. Over the summer, it reportedly fired a missile from a hypersonic glide vehicle while testing its fractional orbital bombardment system (FOBS) — a technical advance that, if true, means the Chinese can attack targets from space with nuclear weapons. Although China insists it will never be the first to use nuclear weapons, this claim has less credence than in the past, when the country’s nuclear force was much smaller.

The last thing we want to do is to repeat the experience of the Cold War, when the United States built over 32,000 warheads and the USSR over 40,000. We created a nuclear impasse that was expensive and destabilizing. It almost ended in nuclear holocaust during the Cuban Missile Crisis. Now, with new technologies once again driving the risk of escalation, we could end up in a similarly dangerous situation with China.

The United States and Russia have been working together since Cuba to avert new nuclear crises. The world’s first nuclear arms race offers two important lessons for how to prevent a second: First, the US and China should avoid trying to limit new technologies and focus on ensuring mutual nuclear predictability. Second, they should be prepared for a long road, since agreeing to joint measures to foster that predictability is far from straightforward. Luckily, both countries have more experience with nuclear diplomacy than the U.S. and the USSR did, which offers reason to be hopeful.

Realistically, both the U.S. and China are likely to evade any restrictions made on new nuclear technologies. The U.S. and USSR learned this the hard way in the 1970s, when the first strategic arms limitation agreement, SALT I, froze deployment of new strategic intercontinental missiles. The USSR got out from under that freeze by deploying additional warheads on top of ground-launched missiles — multiple, independently targetable reentry vehicles, or MIRVs. This violated the spirit of SALT I, if not the letter, and undermined strategic stability by giving Russia an edge.

Although many in the United States cried foul, before too long the U.S. had deployed its own MIRVs on highly accurate submarine-launched missiles. Now, in theory, the United States had the upper hand in the nuclear stability contest, since its missiles, hidden underwater, could survive and retaliate against a surprise Russian attack.

It became clear that limiting technologies, such as new types of missiles, would be difficult. Instead, the U.S. and USSR came around to the notion that weapons themselves should be controlled and reduced. Hardware items can be monitored or destroyed during an arms reduction process, but the technology that goes into them cannot.

Yet as the two sides learned, “controlling” arms can mean many different things in an arms control negotiation. It can be operational, such as constraining where weapons are deployed, or numerical, such as setting caps on missiles and warheads. It also has an element of verification to it; indeed, the Russian word for verification is “Контроль” — ensuring that measures agreed to are being implemented.

Which leads us to the second lesson for the U.S.-China strategic stability process: Patience will be key. Control and reduction may sound straightforward, but it took the U.S. and USSR more than a decade to agree to that course. Verification involving on-site inspection was always difficult for the Soviet Union, which did not like the idea of foreign inspectors poking around sensitive nuclear deployment sites. Reductions, while more straightforward, were not very popular in either the Russian General Staff or the Pentagon. It was not until President Ronald Reagan and Soviet leader Mikhail Gorbachev met at Reykjavík in 1986 that our two countries began to take deep reductions in nuclear weapons seriously.

When the U.S.-China talks do kick off, American negotiators should be prepared to hear some longstanding complaints about how the U.S. is undermining strategic stability, through missile defenses that undermine the Chinese nuclear deterrent or highly accurate conventional missiles that are capable of destroying Chinese nuclear targets. The U.S. side, in turn, will want to hear clear explanations for China’s multifaceted nuclear developments.

Both sides will have to deal with these complaints, but fortunately, it will not require the years of effort that it took in the Cold War. The United States has enough experience with nuclear diplomacy, including with the Chinese, to avoid that outcome. After all, the Obama administration carried on multiple strategic stability tracks with Beijing, including at the military-to-military level.

China, though a relative newcomer as a nuclear competitor, also brings valuable experience to bear, having participated in talks with the U.S. and in international regimes such as the Non-Proliferation Treaty and the Comprehensive Test Ban Treaty. The nuclear weapons states under the NPT — France, the United Kingdom, the United States, China and Russia — regularly get together to discuss stability; they will do so again in Paris in early December. In other words, it should be possible to make faster progress with China than in the old days with the Soviet Union.

Russia can help by holding its own stability discussions with the Chinese. It will not be possible, nor particularly desirable, to put all three countries in a room together: America’s separate nuclear agenda with Russia is far more advanced, despite the countries’ troubled relationship, with a working group already in train to pursue a follow-on treaty to New START.

The relationship with China is not as mature, nor do the Chinese have the nuclear parity that the U.S. and Russia have. We should therefore not expect them to jump into nuclear reduction negotiations. U.S. officials reportedly acknowledged that fact after the Biden-Xi conversation, saying a formal arms control negotiation is not a realistic goal “because Beijing wouldn’t accept limits on its nuclear arsenal unless it was closer to parity with Washington and Moscow.”

Instead, based on my discussions with Chinese experts, I expect a broad-ranging stability agenda, including discussions of traditional nuclear strategy, doctrine and force posture. Just as the 1970s and 80s brought more clarity about the USSR’s nuclear intentions, we need to understand more about China’s objectives in its nuclear modernization — while also being willing to talk frankly about our own. Our top goal must be to avoid an arms race.

One opportunity to make progress more quickly than the U.S. and USSR did might be in sharing information and eliminating misperceptions around new technology, rather than moving to limit it. For instance, the two sides could discuss the danger of cyberattacks on nuclear command and control; missile defense modernization; or the implications of hypersonic missiles. China might also be willing to engage early in areas where it has more equality of capability, such as space-based assets. Progress in this area would be especially timely, given the Chinese FOBS test in the summer and the Russian anti-satellite test just last week.

Of course, we do not yet know how seriously the Chinese will take this process. At times in the past, the stability dialogues with Beijing seemed to add up to all talk and no results. If the Chinese are serious, both countries may gain in predictability and security. If they are not, the U.S. will have more reason to see malign intent in their actions.

While China’s nuclear push is worrisome, there is no need to panic. The United States has more than 4,000 nuclear warheads; even if the Chinese do quadruple their force, they will only have a quarter of that. We have time to understand each other’s nuclear strategy and force posture.

In the end, the most important development is that Biden and Xi have taken ownership of the strategic stability dialogue. That will motivate their governments to end the current nuclear silence between Washington and Beijing. If we succeed in launching a good discussion and the Russians help, we will be on the road to avoiding a new arms race. Thankfully, history shows this outcome to be eminently possible, if we work hard at it.