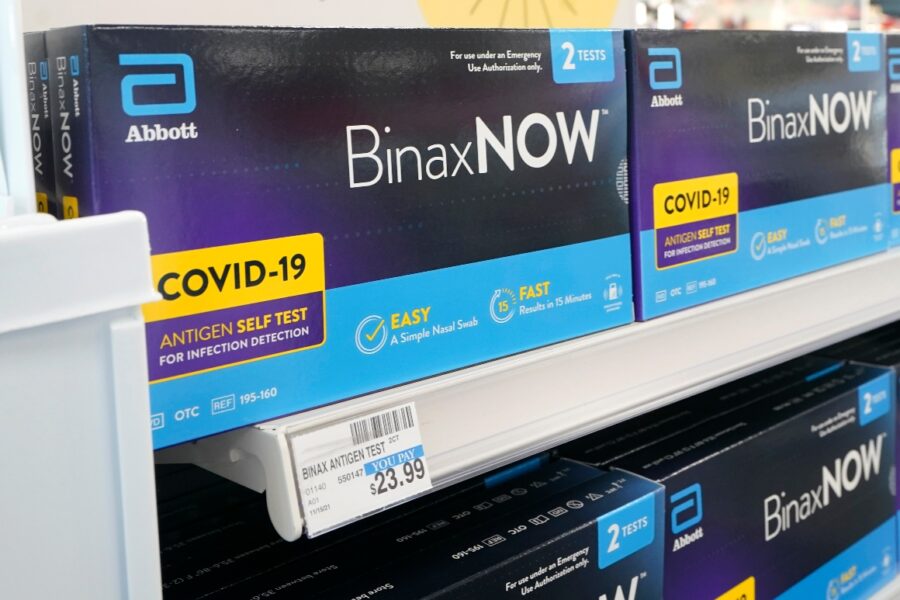 The Biden administration opted for a controversial plan to pay for at-home Covid-19 testing through private insurance after officials concluded it would be too costly and inefficient to simply send the tests to all Americans for free, three administration officials told POLITICO.

The decision to forgo a European-style approach to testing — which hinges on the government buying and widely distributing rapid tests — has sparked days of backlash, putting the White House on the defensive over its newest plan for containing the virus.

Public health experts have panned the administration’s approach as too complex, zeroing in on a proposal that would require people to submit testing expenses to their insurer for reimbursement. And White House press secretary Jen Psaki’s brusque dismissal when asked earlier this week if the administration considered giving everyone free at-home tests only served to further inflame the administration’s critics, who saw the remarks as glib.

“Offensive and unbecoming of someone representing the White House,” said Celine Gounder, an infectious disease specialist who advised the Biden transition’s Covid-19 response. “It’s like they want to appear like they’re doing something, but aren’t as concerned about actual impact.”

The White House has since sought to salvage the rollout, emphasizing its broader efforts to make Covid-19 tests freely available in hospitals, doctor’s offices and community centers.

“We’ve considered and continue to consider a host of options as we continue to work to support testing access and affordability,” a Department of Health and Human Services spokesperson said on Thursday, highlighting the administration’s tripling of free testing locations and plans to distribute 50 million free tests to community sites.

But within the administration, the criticism has rankled aides who contend that the sheer price tag of handing out hundreds of millions of rapid tests — combined with the likelihood that a significant percentage would end up going unused — makes creating such a universal program on the fly untenable in the U.S.

The cost of regularly sending all Americans at-home tests could quickly skyrocket and become unsustainable, officials said, pointing to the nearly $50 billion “test and trace” program that the U.K. put in place for a country that’s one-fifth the size.

Congress did allocate roughly $48 billion earlier this year for Covid-19 testing. But only $9.4 billion remains uncommitted, and there are already plans to spend that amount in the coming months, the HHS spokesperson said.

That means the White House would need to go back to lawmakers for more money to fund any kind of tests-for-all system, effectively ruling out quick action and threatening to bog the administration down in another partisan funding fight.

Biden officials working on the Covid-19 response have also questioned how many Americans would take advantage of free at-home tests, and how much their availability would help rein in the virus.

In the U.K. and Germany, caseloads are spiking once again despite extensive reliance on rapid tests to slow the virus’ spread. A similar approach would likely be even less effective in the U.S., officials said, because of how politicized the pandemic response has become.

Administration officials worried that large percentages of rapid tests in areas hardest-hit by Covid-19 would go unused because of skepticism over the federal response, eating up supply that could be directed elsewhere.

There is similar skepticism over whether most Americans prefer taking regular rapid tests, rather than seeking out more accurate PCR tests when needed.

“The primary channel people are getting tested isn’t at home,” the HHS spokesperson said. “Samples are taken primarily at pharmacies and health care providers.”

Looming over the internal deliberations was a bigger and more fundamental question: whether the federal government should effectively take over the burgeoning at-home test market by buying up all its products.

Just 13 companies are authorized to sell over-the-counter tests in the U.S., though many more are still waiting to get green-lighted by the FDA. Even amid fears of a Covid-19 resurgence, Biden officials fretted that intervening now would stifle competition and discourage newer test makers from scaling up their manufacturing.

“It would’ve capped the market and not done anything to drive prices down,” a senior administration official said.

That approach hasn’t won much support outside the government, especially amid fears that the Omicron variant will drive a new wave of infections. Rapid tests are still expensive and in short supply, preventing people from making regular testing part of their routine. Health experts argue large government purchases of home tests could be made at a far lower cost than their retail price.

Proponents also contend that there’s growing demand for at-home testing, if the administration made it more accessible. In New Hampshire, 800,000 tests were ordered within a day after they were offered for free to all residents as part of a National Institutes of Health study.

“For this next phase of the pandemic, rapid access to rapid testing will be key,” Nirav Shah, who heads Maine’s Center for Disease Control, said last week. “We want to make sure that the supply is there to meet that demand.”

A diagnostics industry source said the Biden administration deserves some credit for the approximately $3 billion of recent investments into rapid tests, but more needs to be done to ensure there is not a shortage of tests in the future.

“We really should be focusing on augmenting existing policy and doubling down and making sure we have the strongest manufacturing possible to get us over any dips in demand that may come about, understanding that we could have yet another increase in demand that we can’t see beyond the horizon,” the source said.

The current supply of over-the-counter tests is also a practical barrier. The number of at-home tests being manufactured per month is expected to reach 200 million this month, 240 million in January and 300 million in February, according to a readout of a recent Centers for Disease Control and Prevention call with states obtained by POLITICO.

The White House in the meantime is weathering blowback over its alternative plan, which will require private insurers to reimburse Americans for the cost of their at-home tests. Health experts largely dismissed the concept as convoluted and ineffectual, especially since it requires people to purchase the tests up front and submit receipts to get paid back.

Those reimbursement requirements won’t go into effect for weeks and are not retroactive, meaning they’ll do little to make testing more affordable as travel picks up for the holidays.

“There are so many details that still need to be hammered out,” said Jennifer Nuzzo, an epidemiologist at Johns Hopkins University’s Bloomberg School of Public Health. “I cannot imagine it is falling into place in the way that we need for this move to have any meaningful dent on the trajectory of the pandemic.”

The administration is still trying to fill in details of major elements of the plan, such as how to streamline the reimbursement process and prevent testmakers from charging insurers excessive rates.

The White House did not consult with major insurance industry groups on the specifics of the proposal beforehand, and gave them fewer than 24 hours notice that it would be part of Biden’s broader Covid-19 blueprint, two people with knowledge of the matter said.

Some administration officials and close Biden allies have shared in the frustration over testing, privately deriding the reimbursement plan as an unforced error. They also pointed to the White House’s decision earlier this year not to invest more heavily in building a broader national testing apparatus, including in finding ways to ramp up manufacturing of at-home tests.

“This is something we all had talked about 10 months ago,” said one person close to the White House, who called the reimbursement concept a “ridiculous idea.”

“This isn’t about money,” the person added. “This is about imagination and excellent execution.”

Yet others said the calculation was simpler: For much of the year, it just didn’t seem like a massive testing system would be necessary, thanks to the effectiveness of Covid-19 vaccines. Then the Delta variant hit, changing the course of the pandemic and upending the administration’s path out of the crisis. The number of new Covid-19 infections climbed from fewer than 12,000 a day over the summer to more than 160,000 in early September.

“They were just overly confident in June that we were turning a corner and this was going to be game over,” Gounder said.

Even as its testing strategy expands, the White House has emphasized that vaccination remains the core component of its response — most recently pouring resources into efforts to get more Americans booster shots.

Still, Biden officials have bristled over the pushback, complaining that the loudest proponents of a massive testing system have also ignored the political and logistical challenges standing in the way.

“Where we agree is that testing is a critical part of the response,” the senior administration official said. “Our pathway is multiple paths for people to get free tests. It’s less of the single, easy-to-grasp solution that people on Twitter like to hold up as a model.”