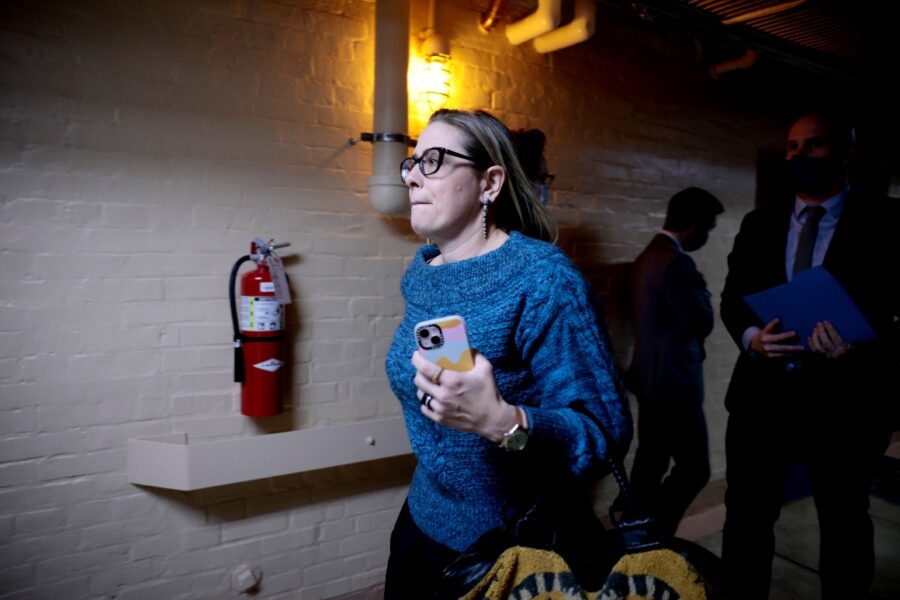 Kyrsten Sinema supports the elections reform bill that Democrats are considering a year-end push to pass. She doesn’t support a shortcut around the filibuster to get it done.

The Arizona moderate is making clear that she intends to keep protecting the Senate’s 60-vote requirement on most legislation and she isn’t ready to entertain changing rules to pass sweeping elections or voting legislation with a simple majority. Her Democratic colleagues have been discussing those revisions as they weigh dropping their focus on President Joe Biden’s $1.7 trillion climate and social spending bill and pivoting to voting rights, though it’s not clear that avenue will be any more successful.

In a statement to POLITICO, a spokesperson said that Sinema “continues to support the Senate’s 60-vote threshold, to protect the country from repeated radical reversals in federal policy which would cement uncertainty, deepen divisions, and further erode Americans’ confidence in our government.” Since joining the Senate in 2019, Sinema’s been a fierce defender of the filibuster and warned that reversing it could lead to terrible outcomes for Democrats down the line.

Sinema continues to support the Freedom to Vote Act, which was negotiated with Sen. Joe Manchin (D-W.Va.), as well as the John Lewis Voting Rights Advancement Act, even as she raises questions about how to pass those bills in an evenly divided Senate. Democratic senators have mostly focused on lobbying Manchin to try and sway him to pass elections legislation with a simple majority, but Sinema isn’t there yet either.

“Senator Sinema has asked those who want to weaken or eliminate the filibuster to pass voting rights legislation which she supports if it would be good for our country to do so,” said her spokesperson John LaBombard. He warned that legislation could be “rescinded in a few years and replaced by a nationwide voter-ID law, nationwide restrictions on vote-by-mail, or other voting restrictions currently passing in some states extended nationwide.”

Manchin and Sinema both attended a Wednesday afternoon meeting with Sens. Jon Tester (D-Mont.), Tim Kaine (D-Va.) and Angus King (I-Maine), centrists who are advocating for a workaround to the filibuster to pass voting rights legislation. Democrats also discussed how to pass elections reform bills during a party lunch on Tuesday, and Senate Majority Leader Chuck Schumer met with Manchin, King, Kaine and Tester on Wednesday morning.

Importantly, Democrats are no longer trying to scrap the filibuster altogether given Manchin’s and Sinema’s opposition to that step. Instead, they’re pivoting to an attempt to sway the duo to support a rules change that could enable legislation curbing gerrymandering and restoring the Voting Rights Act to evade the 60-vote requirement.

The leading options that Manchin and Sinema’s colleagues hope to sway them on are installing the talking filibuster, which would force the minority to hold the floor and continuously put up at least 41 votes to block legislation, or creating a filibuster exception specific to the issue of elections and voting.

Regardless, Democrats would need to use the so-called “nuclear option” to change the Senate’s rules on a simple majority vote, something Manchin and Sinema have typically opposed. After Wednesday afternoon’s meeting, Manchin said the issue is “a tough one … because what goes around comes around here. You’ve got to be very careful what you do.”

On Tuesday, Sen. Raphael Warnock (D-Ga.). lamented the Senate’s filibuster exemption to raise the debt ceiling, saying he agonized over whether to support that proposal as voting legislation stalls. Warnock is a leading advocate for confronting voting rights this month, rather than punting on reforms until January or later.

“Our democracy is clearly imperiled. The lights are flashing and we are irresponsible if we don’t respond,” Warnock said.

And Sen. John Hickenlooper (D-Colo.) came out in support of changing the filibuster to pass elections legislation, reasoning that “if we can change the process on the debt ceiling, then surely we can do the same to protect our democracy.”

Sinema’s spokesperson said she “believes that the right to vote and faith in our electoral process are critical to the health of our democracy.” And though she’s open to discussions about the Senate rules, she still wants to hear a more comprehensive debate on the Senate floor.

“It is time for the Senate to publicly debate its rules, including the filibuster, so senators and all Americans can hear and fully consider such ideas, concerns, and consequences,” LaBombard said. “If there are proposals to make the Senate work better for everyday Americans without risking repeated radical reversals in federal policy, Senator Sinema is eager to hear such ideas and — as always — is willing to engage in good-faith discussions with her colleagues.”